Euro jumps as ECB President Mario Draghi acknowledged in the post meeting press conference that growth in the Eurozone is solid and broad-based. At the same time Draghi also promised to "decide on the calibration" of its policy instruments beyond this Autumn. He went further to say that the "bulk of the decisions" will come at the October meeting. Regarding a recent hot topic in exchange rate, Draghi noted that a "few" members express concerned back in July. And those concerns were reiterated by "most" members this time. And recent volatility in the exchange rate is seen as a source of uncertainty that requires monitoring. Nonetheless, while financial conditions "unquestionably tightened" following Euro’s rise, they remain "broadly supportive" for non-financial enterprises.

ECB left the main refinancing rate unchanged at 0.00% as widely expected. The marginal lending facility rate and deposit facility rate are held at 0.25% and -0.40% respectively. The central maintained the language in the statement that interest rates will "remain at their present levels for an extended period of time, and well past the horizon of the net asset purchases." Regarding the EUR 60b per month asset purchase program, ECB confirms that it will continue to " run until the end of December 2017, or beyond, if necessary". ECB also hold the door for further stimulus open as it noted that it "stands ready to increase the programme in terms of size and/or duration." In the latest staff economic projections, ECB lower inflation forecast for 2018 to 1.2%, down from 1.3%. For 2019, inflation is projected to be 1.5%, down from 1.6%. Nonetheless, growth forecasts for Eurozone are upgraded, at 2.2% in 2017 versus prior forecast of 1.9%. for 2018, growth is projected to be 1.8%, up fro prior forecast of 1.7%.

US initial jobless claims jumped sharply by 62k to 298k in the week ended September 2. That’s the highest level since 2015 and is way above expectation of 242k. Impacts from hurricane Harvey are the main factors driving the number higher. Initial claims would likely remain elevated in the coming weeks. But after all, it’s still staying below 300k handle for the 131 straight weeks, the longest streak since early 1970s. Continuing claims dropped -5k to 1.94m in the week ended August 26. Also from US, non-farm productivity was revised up to 1.6% in Q2 while unit labor cost was revised down to 0.2%. From Canada building permits dropped -3.5% mom in July.

Yesterday, US President Donald Trump reached a short-term deal with Democrats, despite opposition from Republicans, to extend the US debt limit, providing government funding for three months until December 15. The deal would also provide financial relief to victims of Hurricane Harvey. However, the decision attracted criticism that Trump is further distancing himself from his own party, the Republicans. And some pointed out it’s an act to deflect blame for the gridlock for a year. The move overruled Trump’s own treasury secretary, Steven Mnuchin, who’s in the middle of a proposal for long term fix to the debt ceiling problem. Also, shortly before the meeting, Republican House Speaker Paul Ryan called the Democratic proposal a "ridiculous and disgraceful" idea that would "play politics with the debt ceiling". The development will be closely watched by the markets.

President of the European Parliament Antonio Tajani  said that so far, the EU have noted "no concrete proposals have arrived regarding the three irrevocable priorities of Brexit negotiation. And, there were only "very foggy proposals". Tajani emphasized that "without an agreement on this, we cannot talk about the future." He also reiterated the three priorities as " rights for three-and-a-half million EU citizens living in the U.K.; the payment of what the EU deserves — not a euro more nor a euro less;  third point, the Good Friday Agreement, that has to give us a positive solution for the border between Ulster and the Republic of Ireland." Tajani went on to said that he will ask the Council tomorrow to extend the deadline for assess whether there is sufficient progress to move on to trade agreement. Tajani would suggest to push the decision from October to December. But he also said that "we cannot postpone further than December".

Meanwhile, UK Brexit Secretary David Davis has ruled out staying in the European Economic Area or the European Free Trade Association after Brexit. David said in the House of Commons that joining EFTA would be "more complicated, more difficult and less beneficial". And, the government prefer a separate transition deal. Also, UK will not longer participate in the EEA after leaving the EU. And, "we are considering what steps if any we might take to formally confirm our withdrawal from the EEA agreement."

BoJ Governor Haruhiko Kuroda will end his five year term next March. There have been some criticism on Kuroda for being out of ideas in boosting inflation in Japan. Prime Minister Shinzo Abe’s top advisor Nobuyuki Nakahara warned before that Kuroda will "fall into inertia" after being in the job for so long. But according to a Bloomberg survey of economist done between August 21 and 25, Kuroda is still the front runner for the job by a market. Respondents assigned a score of 68 out of 100 for Kuroda. The next is Deputy Governor Hiroshi Nakaso at 34/100, and then Columbia University Professor Takatoshi Ito at 30/100.

EUR/USD jumps sharply in early US session but it’s staying below 1.2069 resistance so far. Intraday bias remains neutral and more consolidations could be seen. Another fall cannot be ruled out yet as the consolidation extends. But after all, there is no clear sign of trend reversal yet. Outlook will remain bullish as long as 1.1661 holds. Break of 1.2069 will extend larger rise from 1.0339 to next key fibonacci level at 1.2516. 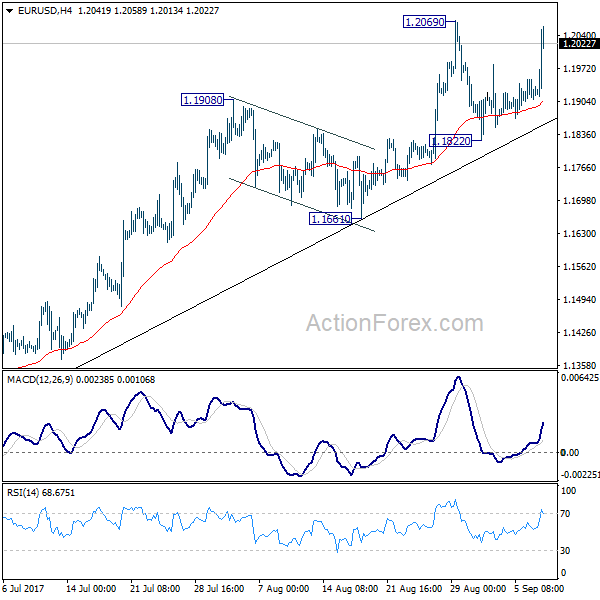 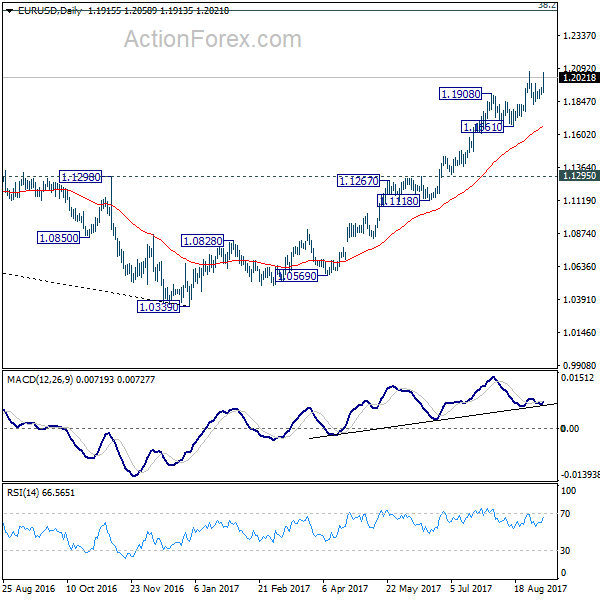 ECB de Cos: Coronavirus keeps balance of risks to downside

How Is Europe Growth Looking?