The forex markets are engaging in sideway trading in tight range in Asia today. The selling climax on Yen should have passed for the near term, with Yen pairs turned into consolidation mode. But the Japanese currency remains the runaway loser for the week, followed by Euro at a distant, and then Swiss Franc and Dollar. Australian Dollar is still the strongest one, together with other commodity currencies and Sterling. 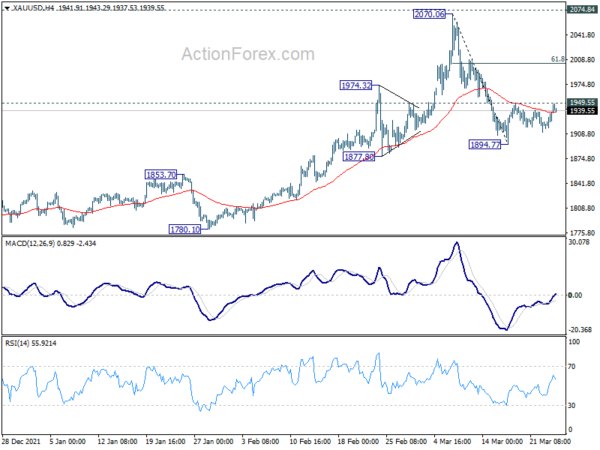 Fed Mester: We’re going to need to do some 50 basis-point moves

Cleveland Fed President Loretta Mester reiterated yesterday that Fed should “front-load” interest rate hikes in the first of of the year, and start quantitative tightening at the same time. “We have to recognize that inflation is very elevated. It is well above our goal. We have to do what we can with both our policy tools to get inflation under control,” she emphasized.

“I think we’re going to need to do some 50 basis-point moves,” Mester added. “I don’t want to presuppose every meeting from here to July, but I do think we need to be more aggressive earlier rather than later.”

San Francisco Fed President Mary Daly said she has “everything on the table” for the May FOMC meeting. “If we need to do 50, that is what we’ll do,” she added. “We’re prepared to do whatever it takes to ensure that we get price stability, which clearly no one thinks we have right now.”

Daly pointed to the new dot plot projection that interest rate will rise to 1.9% this year, and 2.8% by the end of next. “Relative to previous periods of tightening, this is quite a bit of front-loading just as the SEP (Summary of Economic Projections) has indicated.”

“I don’t think it’s appropriate to you, you know, really ratchet up so quickly, that we forget about the risks out there, but rather we be data dependent,” she said.

“We could get a lot of tightening in financial conditions globally and that is something we have to think about,” she said. “Some increase in the policy rate above neutral is likely to be required. That’s down the road in 2023. Right now I don’t think we need to be so decisional on what that looks like.”

BoJ board member Goushi Kataoka warned in a speech to business leaders, “disruptions in Russia-related trade will weigh not just on Russia’s economy but global growth by prolonging worldwide supply constraints.” And for the time being, “we must pay attention to downside risks to Japan’s economy…as well as upside risks to prices.”

Another member said, “many companies are feeling the limit of sticking to a business model that was effective deflation. As they change their price-setting behaviour, inflationary pressure may heighten.”

However, “nominal wage growth must exceed 2per cent for Japan to stably meet the BOJ’s price target,” on member was quoted.

Usamah Bhatti, Economist at S&P Global, said: “Flash PMI data indicated that activity at Japanese private sector businesses fell for the third month running during March. The decline in output eased from the previous survey period however, and was only marginal as companies noted that COVID-19 cases had continued to reduce, allowing the lifting of the quasi-state of emergency across Japan. By sector, manufacturers noted a renewed rise in output in at the end of the first quarter, while service providers indicated a softer deterioration in business activity.

“Higher employment levels in March had been a positive sign, though firms also widely reported higher wages. Meanwhile the reopening of the international borders led to the first new export business growth in the service sector since June 2021.”

In a report, IMF urged RBNZ to have “significant increases” in interest range in the near term to address inflation as a priority.

IMF said, “with the recovery well-entrenched, tight labor market conditions, and elevated inflation, it is appropriate to withdraw fiscal and monetary support as envisaged.”

Fiscal policy should “remain agile”. “While the scheduled tightening of fiscal policy is appropriate, the authorities should calibrate the fiscal stance to the evolution of the pandemic and economic conditions, providing additional, targeted support where needed.”

As for monetary policy, IMF said it should remain “data dependent, and continued, swift policy normalization will be appropriate under baseline conditions.”

“Given New Zealand’s strong cyclical position and inflationary pressures, significant increases in the Official Cash Rate in the near term are appropriate, signaling the RBNZ’s commitment to addressing inflation as a priority.”

SNB is expected to keep interest rate unchanged at -0.75% today, and reiterate the need for negative rate and readiness for intervention. ECB will release monthly economic bulletin.

On the data front, PMIs from Eurozone and UK will be featured. US will release jobless claims, durable goods orders, current account and PMIs.

A temporary top is formed at 0.7506 on loss of upside momentum. Intraday bias in AUD/USD is turned neutral first. Further rally is expected as long as 0.7372 support holds. On the upside, above 0.7506 will target 0.7555 resistance. Decisive break there should confirm that whole corrective decline from 0.8006 has completed at 0.6966. On the downside, however, break of 0.7372 will dampen this bullish case, and turn bias back to the downside for 0.7164 support. 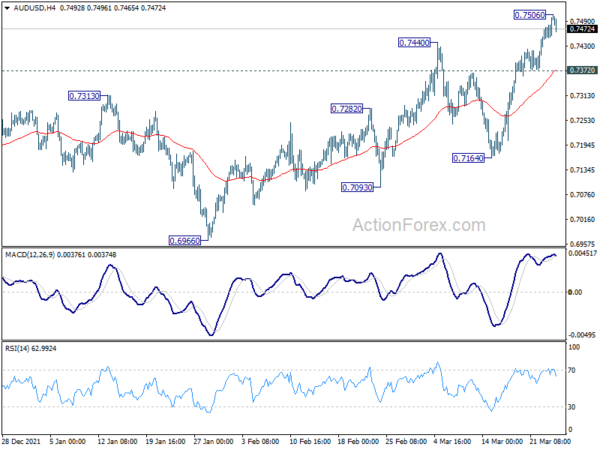 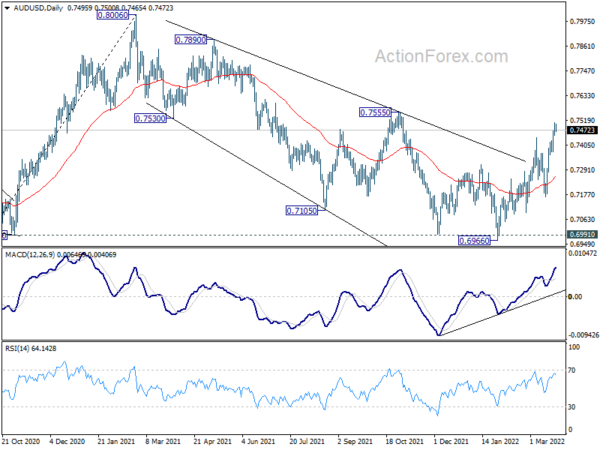