Dollar’s broad based rally continues into US session. The unexpected contraction of Q1 US GDP might give the greenback a little jitter. But it’s unlikely to alter the up trend for now. As for today, Canadian Dollar is the second strongest Yen is the worst performing one on post-BoJ selloff. But Kiwi and Sterling also also weak. Euro and Swiss Fran are mixed together with Aussie.

Technically, as Yen is back under pressure, some focus will be on CAD/JPY. The pull back from 102.93 should have completed at 98.98 already. Retest of 102.93 should be seen next and break will resume larger up trend. That could be a sign of more broad based selling in Yen, the should be followed by break of 95.73 high in AUD/JPY and 139.99 high in EUR/JPY. 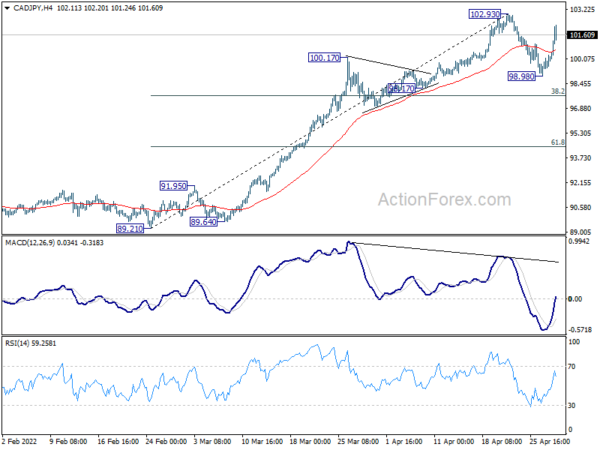 US GDP unexpectedly contracted -1.4% annualized in Q1, much worse than expectation of 1.1% growth. That’s also the first contraction reading since Q2 2020.

US initial jobless claims dropped to 180k, continuing claims down to 1.408m

In remarks to a Committee of the European Parliament, ECB Vice President Luis de Guindos said, Russian invasion of Ukraine has “cast a dark shadow over” Europe, as a human tragedy and affecting the economy. Economic activity is expected to continue to growth this year, “albeit at a slower pace than was expected “. The war has “amplified the impact on consumer energy prices”.

The surge in energy prices is “reducing demand and raising production costs” while the war is “weighing heavily on business and consumer confidence and has created new bottlenecks.” These developments point to slower growth in the period ahead.

He reiterated that the APP will be concluded in Q3 and changes to interest rates will follow “some time after” the end of the net purchases, and will be “gradual”.

BoJ left monetary policy unchanged as widely expected, by 8-1 vote, with dove Goushi Kataoka dissented again. Under the yield curve control framework, short-term policy interest rate is held at -0.10%. 10-year JGB yield target is kept at around 0%, without upper limit on JGB purchases. BoJ also clarified that it will offer to purchase 10-year JGBs at 0.25$ every business day through fixed-rate purchase operations.

The central bank also reiterated that it will “expanding the monetary base until the year-on-year rate of increase in the observed consumer price index (CPI, all items less fresh food) exceeds 2 percent and stays above the target in a stable manner.”

It also pledged that it “will not hesitate to take additional easing measures if necessary; it also expects short- and long-term policy interest rates to remain at their present or lower levels.”

In the new economic projections, GDP is forecast to grow:

CPI (all items less fresh food) is expected to be at:

New Zealand ANZ business confidence ticked down to -42 in Apr

ANZ said: “With plenty of wage and other cost inflation in the pipeline, it’ll be some time before the RBNZ can conclude that they’re getting ahead of the inflation game. We continue to expect another 50bp hike in May, and steady 25bp increases thereafter taking the OCR to a peak of 3.5%.”

As a result of the monthly deficit in March 2022, the annual goods trade deficit has further widened to reach NZD -9.1B for the March 2022 year.

USD/CHF’s rally continues today and intraday bias remains on the upside. Current up trend should target next medium term projection level at 0.9864. On the downside, below 0.9669 minor support will turn intraday bias neutral and bring consolidations. But downside of retreat should be contained above 0.9459 resistance turned support to bring another rally. 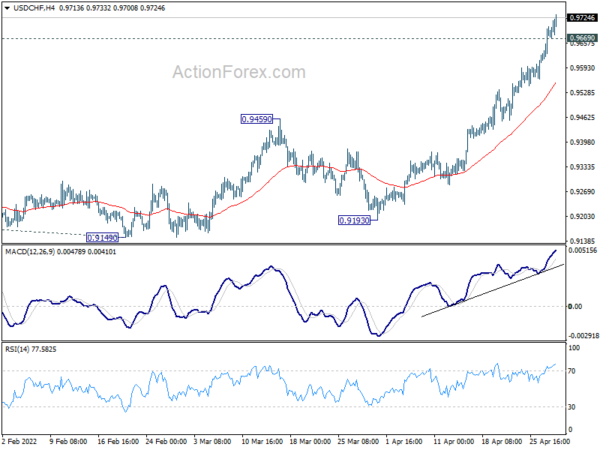 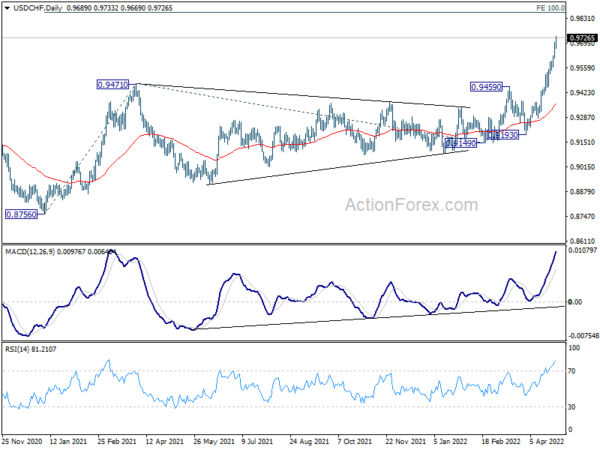