SNB and BoE Next after Fed Delivered

US stocks recovered overnight after Fed delivered the 75bps rate hike as market priced in, while Dollar and yields retreated. Asian markets are mixed with some weakness seen in Hong Kong HSI. For the week, the greenback remains the strongest one, except versus Yen which it’s paring gains against. Sterling is the worst performing as focus now turns to SNB and then BoE rate decision.

Technically, there is some downside prospect for Dollar for the near term, given then it was rejected against near term resistance levels against most peers. The levels include 1.0348 in EUR/USD, 0.6828 support in AUD/USD, 1.0063 resistance in USD/CHF and 1.3075 resistance in USD/CAD. Euro is the exception as it’s clearly weak against Sterling, Aussie and Canadian. In particular, eyes will be on whether side of the range of 0.8484/8720 would EUR/GBP breaks through. 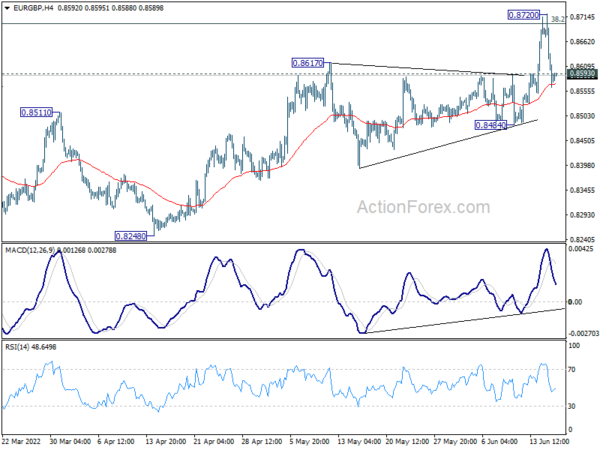 Fed hikes by 75bps to 1.50-1.75%. Esther George dissented and voted for a 50bps hike only. Fed said that it’s “highly attentive to inflation risks” in the statement. Also, Fed now forecasts interest rate to be at 3.4% by the end of this year, sharply higher than prior estimate of 1.9%. Also, in the new dot plot, all members penciled in rate hikes to 3.125% and above by the end of 2022.

In the new median economic projections, federal funds rate is forecast to be at:

GDP growth is forecast to be at:

PCE inflation is forecast to be at:

Core PCE inflation is forecast to be at:

Unemployment rate is forecast to be at:

US stocks closed higher overnight even though FOMC delivered an “uncommon” mega hike of 75bps. Fed Chair Jerome Powell also indicated at the post-meeting press conference that “either a 50 basis point or a 75 basis point increase seems most likely at our next meeting” while “ongoing rate increases will be appropriate.”

The recovery in stocks is more seen as a “sell-on-rumors-cover on news” move. Fed delivered what the markets have expected and the selloff was already done earlier in the week. Also, some would give a nod to Fed’s determination to combat inflation and create the conditions for a soft-landing, even though it’s a big challenge. 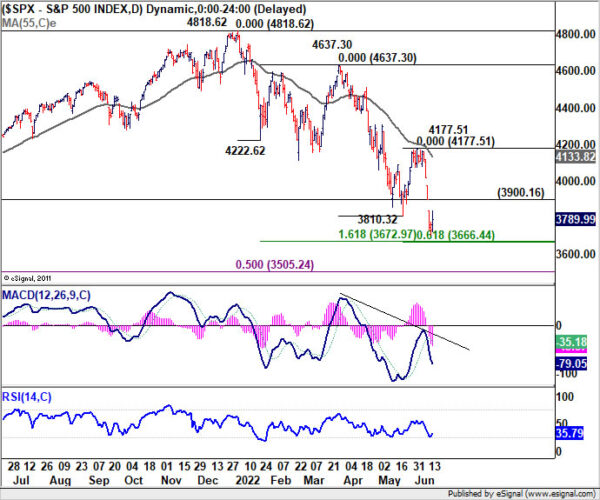 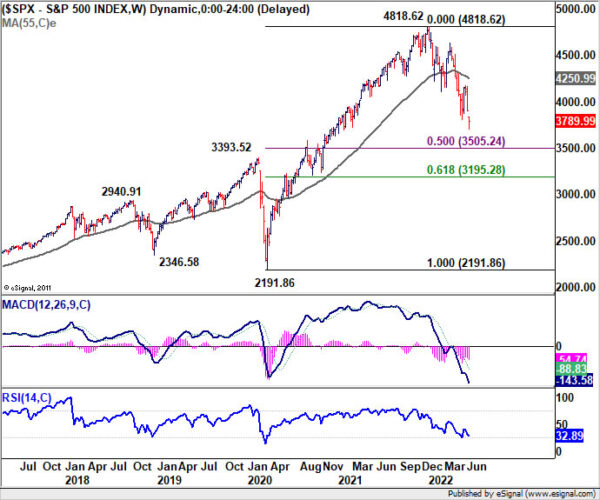 Bjorn Jarvis, head of labour statistics at the ABS, said: “The increase in May 2022 was the seventh consecutive increase in employment, following the easing of lockdown restrictions in late 2021. Average employment growth over the past three months (30,000) continues to be stronger than the pre-pandemic trend of around 20,000 people per month.

“In addition to the continuing trend of increasing employment, we have continued to see relatively stronger growth in hours worked. This is something we also saw this time last year, before the Delta outbreak.”

“The service industry group, which makes up approximately two thirds of the economy, remained flat. This result reflects falls in some industries being offset by rises in others.”

SNB and BoE rate decisions are the next focuses for today. SNB is expected to policy unchanged today but start turning up a hawkish tone, setting the stage for the first rate hike in 15 years at the September meeting. Inflation reaching 2.9%, a 14-year high, in May isn’t much of a problem comparing to other parts of the world. Yet, ECB’s tightening stance is giving SNB much room to adjust policy now.

The situation for BoE is more complicated. A 25bps hike to 1.25% is the base case. There are arguments for a larger hike with inflation at 7.8% yoy. Yet, there are also arguments for a pause given that UK economy has already started a recession in Q2. The eventual decision and the voting could drive much volatility in the Pound.

Here are some previews for BoE and SNB:

GBP/CHF is staying in the down trend from 1.3070 for now and outlook remains bearish as long as 1.2292 resistance holds. But the structure of the decline suggests that it’s more of a corrective move. Downside potential could be limited with strong support at around 61.8% retracement of 1.1107 to 1.3070 at 1.1857 to complete the down trend. 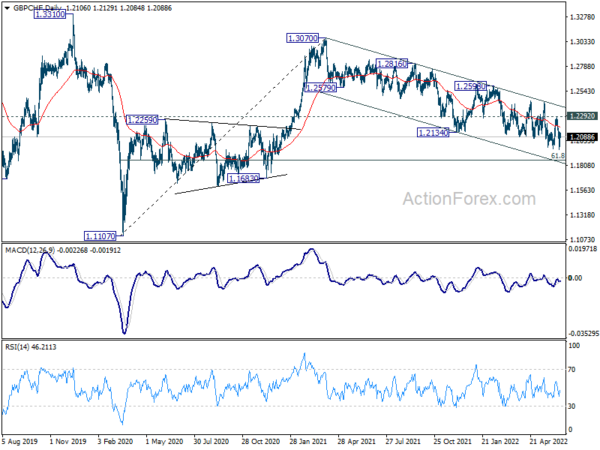 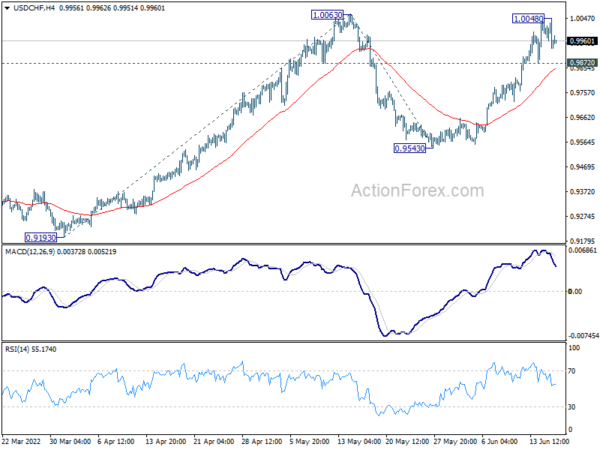 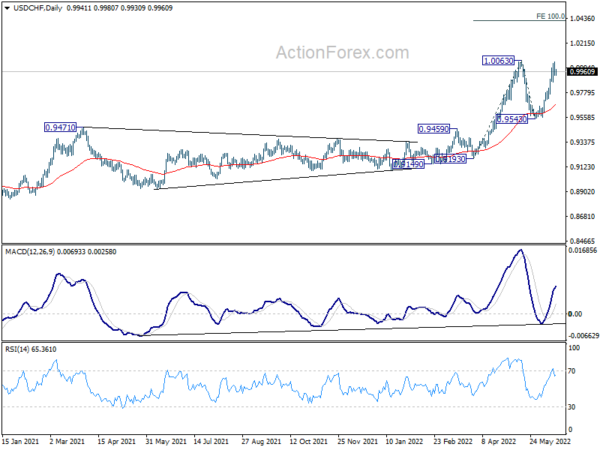