Swiss Franc remains the strongest one for the week and stays firm into US session. Dollar is also regaining some ground, as the second best. On the other than, commodity currencies are the worst performing one, as led by Canadian. In other markets, European indexes are mildly in black while US futures are nearly flat. Trading might turn quiet ahead of a long weekend in the US.

Technically, EUR/CHF is getting close to 1.0086 support. Firm break there will raise the chance of larger down trend resumption through parity and 0.9970 low. The question is, if that happens, whether it would be accompanied by more broad based decline is Euro. In particular, EUR/USD is still in favor to break through 1.0339 low at a later stage. 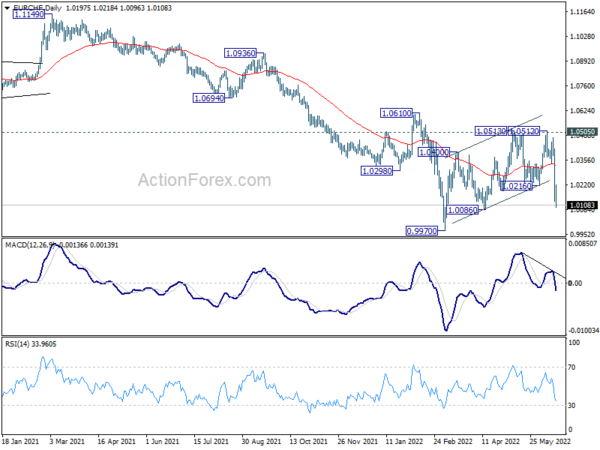 BoE Chief Economist Huw Pill told BloombergTV that in yesterday policy decision statement, “the word ‘forcefully’ – which clearly is the word the market is focused on, you focused on, and has a meaning – it’s also important to see that that was put in the context of ‘if necessary we will act forcefully’, and so there’s a conditionality there.”

But he also indicated that the statement had “a certain level of flexibility because it had to encompass those different views… we were trying to emphasise is that that flexibility also applies to what the decisions are. I don’t think it’s all about August. We talked about the pace, timing and scale of future decisions.”

BoJ left short-term policy interest rate unchanged at -0.10%, and 10-year JGB target at around 0% under the yield curve control. It will continue to defend the 0.25% 10-year JGB yield cap, by offering to purchase it at the rate on every business day through fixed-rate purchase operations.

The decision was made by 8-1 vote. Goushi Kataoka dissented again, pushing for further strengthening monetary easing by lowering short- and long-term interest rate.

The central bank also said “it is necessary to pay due attention to developments in financial and foreign exchange markets and their impact on Japan’s economic activity and prices.”

BoJ Governor Haruhiko Kuroda said in the post-meeting press conference, “the recent rapid weakening of the yen is raising uncertainty over the outlook and making it hard for companies to draw up business plans so it is negative and undesirable for the economy.”

“We will have to closely watch developments in financial and currency markets and their impact on the economy and prices,” he added.

Kuroda also added, “policy tightening is not appropriate at this point.” And he warned, “if the 10-year JGB yield exceeds 0.25%, that would diminish the effect of our monetary easing.”

BNZ Senior Economist, Craig Ebert stated that “The net result of the sub-index values was the inference that excess demand alleviated during May. New orders are perhaps the cleanest representation of demand, while deliveries speak more to the supply side. To the extent excess demand is abating, so too will be core inflation pressure”.

USD/CAD’s rally resumed after brief consolidation and intraday bias is back on the upside. Firm break of 1.3075 will resume medium term rally and sustained trading above 1.3022 fibonacci level will carry larger bullish implications. Next target is 100% projection of 1.2005 to 1.2947 from 1.2401 at 1.3343. On the downside, below 1.2859 minor support will turn bias neutral again first. 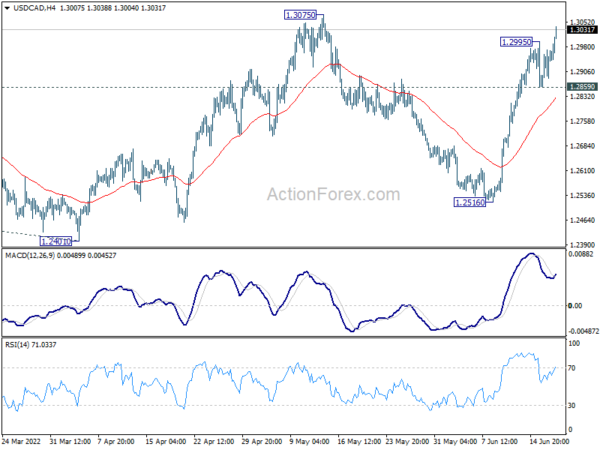 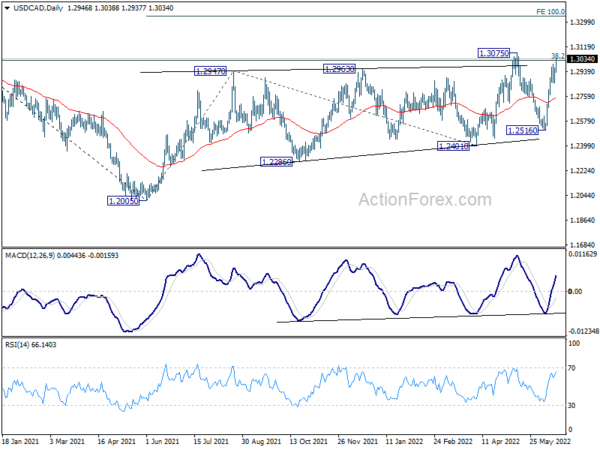