EUR/USD Resilient, But Vulnerable ahead of FOMC

Dollar is trading with a soft tone today, as focus turns to FOMC rate decision. Another 75bps hike is widely expected and Chair Jerome Powell is not expected to deliver any dramatic comments. Traders would likely come back after the event risk is cleared. In the currency markets, Euro is staying under much pressure on gas crisis but Sterling and Swiss Franc are not bothering too much. Commodity currencies are losing some upside momentum, but remain the relatively stronger ones.

Technically, 1.0118 minor support in EUR/USD is the main focus today. It’s so far resiliently holding on to the level despite broad based Euro selloff. But firm break there will argue that rebound from 0.9951 has completed. More importantly, larger down trend would likely be ready to resume through 0.9951 low. This time, if happens, EUR/USD should trade below parity for a longer while before bottoming and reclaiming the psychological level. 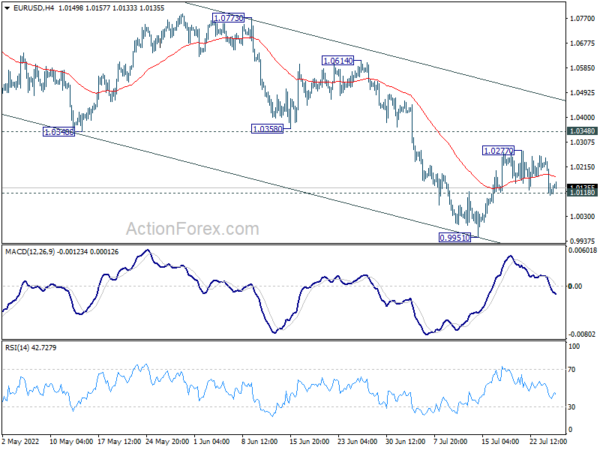 Australia CPI surged to record 6.1% yoy, but below expectations

“In addition to concerns about disrupted supply chains, the war in Ukraine and soaring energy and food prices, there are now worries about sufficient gas supplies for businesses and households next winter. This is currently causing consumer sentiment to hit rock bottom,” explains Rolf Bürkl, GfK consumer expert. “Especially as a tight supply of natural gas is likely to add to the pressure on energy prices and thus inflation.”

Fed to hike another 75bps again, some previews

Fed is widely expected to raise interest rates by 0.75% today, for the second time in a row, to bring the federal funds rate target rate to 2.25-2.50%. More tightening is expected afterwards, as most FOMC members believed that interest rates have enter into “restrictive” region to curb inflation, which is already at multi-decade high.

The questions are on the pace of tightening beyond the neutral range, its impact on economic activity, and risks of recession as a result. Fed Chair Jerome Powell will be grilled for these questions. But a concrete answer is unlikely for now. The next rate-setting meeting on September 21 is nearly two months away. Two sets of prices, jobs and activity data will be published during the time, and before the new economic projections. The situation is so uncertain for Powell to tell the markets anything meaningful.

Here are some previews on Fed: 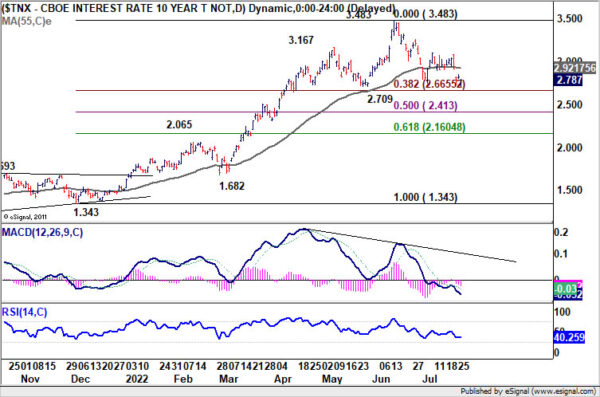 Intraday bias in USD/CAD remains neutral at this point. On the downside, firm break of 1.2818 support will bring deeper fall back to 1.2516 key support. This will also raise the chance of near term bearish reversal. On the upside, above 1.2988 minor resistance will reinforce near term bullishness, and turn bias back to the upside for retesting 1.3222 instead. 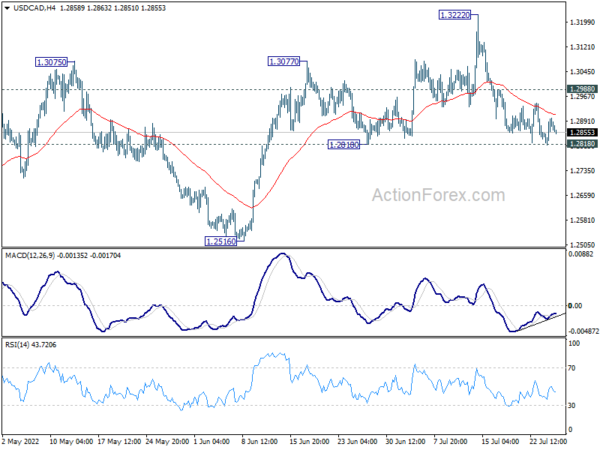 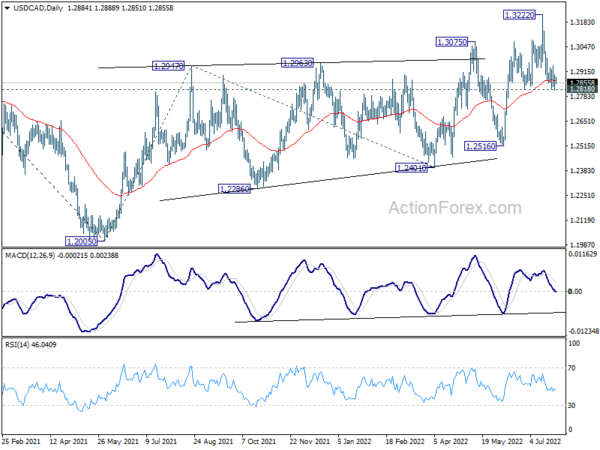