Dollar was sold off broadly overnight and stays weak in Asian session. Markets well received Fed Chair Jerome Powell’s message that tightening pace is going to slow ahead. While stocks also rebounded, Yen reacted more to falling benchmark treasury yields. As for the week, the greenback is now the worst performer. Euro follows as second worst on worries over the impact of gas crunch. Sterling is the strongest one, helped by buying against Euro. Australian Dollar is the second strongest.

Technically, there are three levels to watch to confirm that Dollar selling is here to stay. Firstly, break of 1.0277 minor resistance in EUR/USD will resume the rebound from 0.9951. Further break of 1.0348 support turned resistance will raise the chance of a near term reversal. Secondly, firm break of 134.73 support in USD/JPY will indicate that larger correction is underway, for 126.35/131.34 support zone. Thirdly, break of 1745.21 resistance in Gold will also affirm the case of bullish reversal, after drawing support from 1682.60 cluster level. 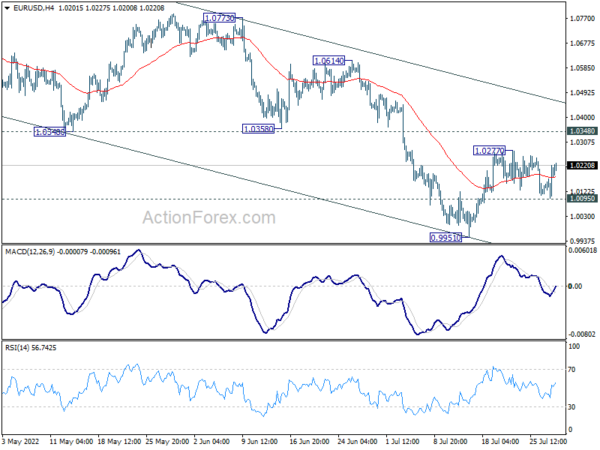 US stocks staged a strong rebound overnight after Fed Chair Jerome Powell hinted that tightening could slow ahead. After yesterday’s 75bps hike, federal funds rate is now at 2.25-2.50%, close to the 2.5% neutral rate.

“While another unusually large increase could be appropriate at our next meeting, that is a decision that will depend on the data we get between now and then,” Powell said. “We will continue to make our decisions meeting by meeting, and communicate our thinking as clearly as possible.”

“As the stance of monetary policy tightens further, it likely will become appropriate to slow the pace of increases while we assess how our cumulative policy adjustments are affecting the economy and inflation,” he also noted. 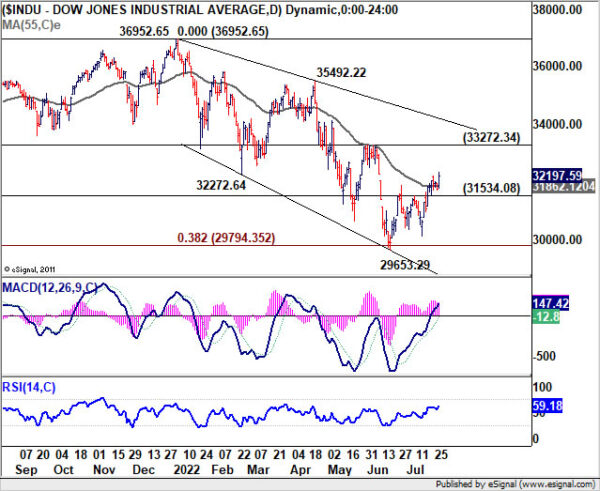 Deputy Governor Masayoshi Amamiya said, “Japan’s economy hasn’t recovered yet to pre-pandemic levels… The foundations for an economic recovery remain weak and the outlook for wages is highly uncertain. As such, we need to support economic activity with accommodative monetary policy.”

“Achieving our price target means having consumer inflation hit 2% on average over the business cycle, not a temporary rise to that level driven by exogenous factors such as increasing energy import costs,” he emphasized.

Japan’s CPI core (all-item ex fresh food), has been above BoJ’s 2% target for three straight months. But officials are seeing it as temporary, at least until wage pressures build up.

Ben Dorber, head of retail statistics at the ABS, said: “While the 0.2 per cent rise in June 2022 was the sixth-straight rise in retail turnover, it was also the smallest so far this year….

“Given the increases in prices we’ve seen in the Consumer Price Index, it will also be important to look at changes in the volumes of retail goods, in next week’s release of quarterly data.”

ANZ said that most activity indicators were little changed, but residential construction intentions plummeted again to a fresh record low (-73.7). Inflation pressures remain intense, but may be topping out.

It added: “New Zealand businesses are well aware that the Reserve Bank is on a mission to reduce customer demand for their wares in order to reduce inflation. No wonder they’re feeling apprehensive.”

Eurozone economic sentiment indicator and Germany CPI flash will be released in European session. Later in the day, US GDP and jobless claims will be featured.

USD/JPY’s fall from 139.37 extends lower today and focus is now on 134.73 support. Considering bearish divergence condition in daily MACD, sustained break of 134.73 will argue that it’s already in correction to medium term up trend. Deeper decline would then be seen through 55 day EMA to 126.35/131.34 support zone. On the upside, above 137.44 minor resistance will turn bias back to the upside for retesting 139.37 resistance instead. 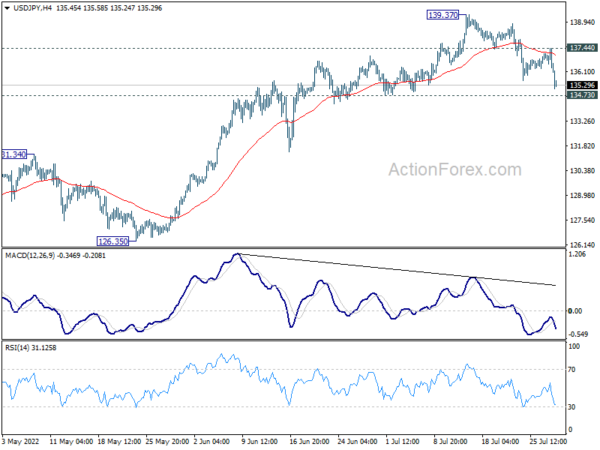 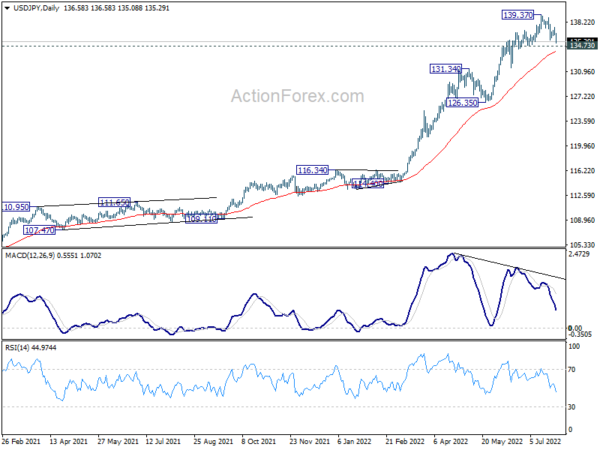