Yen rises strongly today, and buying intensifies in early US session, after surprisingly poor US GDP data. Benchmark treasury yield in both the US and Germany tumble sharply, aiding Yen’s advance. Swiss Franc is also strong For now, Euro is the worst performer for today, as selling started earlier in European session already, while Sterling is playing catch-up. Dollar is mixed while commodity currencies look indifferent.

Technically, USD/JPY’s break of 134.73 support argues that it’s already in correction to medium term up trend. Deeper fall could be seen to 126.35/131.34 support zone. Gold is also pressing 1745.21 minor resistance. Sustained break there will add to the case of bullish trend reversal, after hitting 1682.60 long term cluster support. That, if happens, would be verification of Dollar weakness. 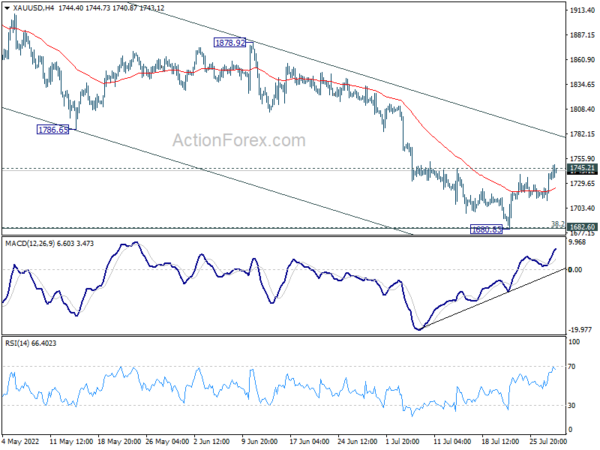 US GDP contract -0.9% in Q2, second quarter of contraction

US GDP contracted an annualized -0.9% in Q2, much worse than expectation of 0.4% rise. That’s the second quarter of contraction, after Q1’s -1.6% annualized.

EU Economic Sentiment Indicator dropped from 101.8 to 97.6. Employment Expectations Indicator dropped from 110.2 to 106.6. In the EU, the drop in the ESI in July was due to significant losses in industry, services, retail trade and consumer confidence, whereas confidence in construction decreased more mildly. The ESI fell markedly in four out of the six largest EU economies, Spain (-5.0), Germany (-4.9), Italy (-3.4) and Poland (-3.2), while it remained broadly stable in France (-0.1) and the Netherlands (+0.2).

Deputy Governor Masayoshi Amamiya said, “Japan’s economy hasn’t recovered yet to pre-pandemic levels… The foundations for an economic recovery remain weak and the outlook for wages is highly uncertain. As such, we need to support economic activity with accommodative monetary policy.”

“Achieving our price target means having consumer inflation hit 2% on average over the business cycle, not a temporary rise to that level driven by exogenous factors such as increasing energy import costs,” he emphasized.

Japan’s CPI core (all-item ex fresh food), has been above BoJ’s 2% target for three straight months. But officials are seeing it as temporary, at least until wage pressures build up.

Ben Dorber, head of retail statistics at the ABS, said: “While the 0.2 per cent rise in June 2022 was the sixth-straight rise in retail turnover, it was also the smallest so far this year….

“Given the increases in prices we’ve seen in the Consumer Price Index, it will also be important to look at changes in the volumes of retail goods, in next week’s release of quarterly data.”

ANZ said that most activity indicators were little changed, but residential construction intentions plummeted again to a fresh record low (-73.7). Inflation pressures remain intense, but may be topping out.

It added: “New Zealand businesses are well aware that the Reserve Bank is on a mission to reduce customer demand for their wares in order to reduce inflation. No wonder they’re feeling apprehensive.”

USD/JPY’s break of 134.73 support now suggests that 139.37 is a medium term top, on bearish divergence condition in daily MACD. Fall from there is seen as a correction to medium term up trend. Intraday bias is on the downside for 55 day EMA (now at 133.84) first. Sustained break there will target 126.35/131.34 support zone. On the upside, break of 137.44 resistance is needed to indicate completion of the decline. Otherwise, risk will stay on the downside in case of recovery. 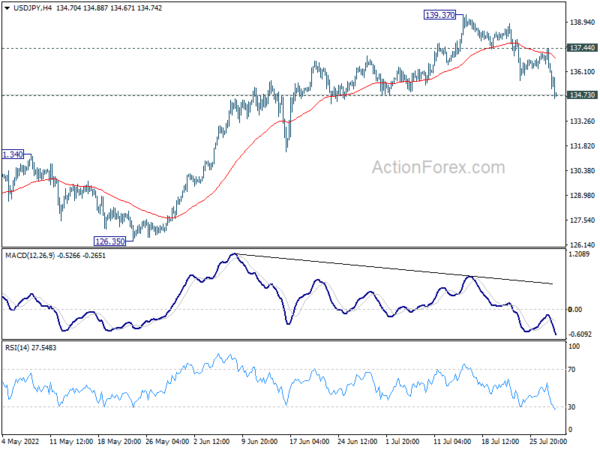 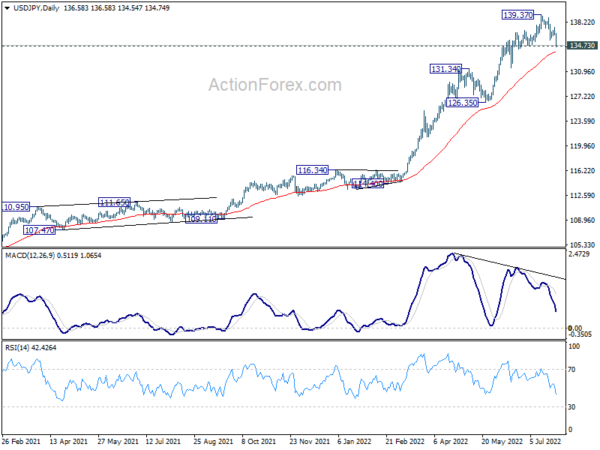