Dollar Selling is Back While Yen Strength Continues

Dollar selling is back today while Yen’s strength continues. Euro is also soft as the second worst after the greenback. On other hand hand, Sterling is strengthening with help from buying against Euro. Commodity currencies are mixed for now, with Canadian Dollar turning softer while Kiwi leads Aussie higher. Stock market sentiment is mixed, and will probably need some guidance from this week’s important data releases, starting from ISM manufacturing today.

Technically, one interesting development to note is the interplay between Dollar and Euro. EUR/USD is still range bound while both are being pressured elsewhere. GBP/USD and AUD/USD are already resuming near term rebound, after very brief retreat. At the same time, EUR/GBP and EUR/AUD look on the verge of decline resumption. Let’s see if the developments in GBP/USD, AUD/USD, EUR/GBP and EUR/AUD would help squeeze EUR/USD out of range, or keep it inside.

UK PMI Manufacturing was finalized at 52.1 in July, down from 52.8 in June. That’s also the lowest level in 25 months. S&P Global said that output fell in consumer and intermediate goods industries. Job created accelerated as companies addressed staff shortages.

“The UK manufacturing sector shifted into reverse gear at the start of the third quarter. Output contracted for the first time since May 2020, as new order intakes suffered the first back-to-back monthly decreases for two years.

“Rising market uncertainty, the cost of living crisis, war in Ukraine, ongoing supply issues and inflationary pressures are all hitting demand for goods at the same time, while lingering post-Brexit issues and the darkening global economic backdrop are hampering exports.

“With the Bank of England implementing further interest rate hikes to combat inflation, the outlook is beset with downside risks. With this in mind, the continued low degree of optimism among manufacturers is of little surprise.”

“Production is falling at especially worrying rates in Germany, Italy and France, but is also now in decline in all other surveyed countries except the Netherlands, and even here the rate of growth has slowed sharply…

“The energy crisis adds to the risks that not only will weaker demand and destocking cause manufacturing production to decline at an increased rate in the coming months, but reduced energy supply will act as an additional drag on the sector.”

Wang Zhe, Senior Economist at Caixin Insight Group said: “In general, the eased Covid situation and restrictions facilitated a continuous recovery in the manufacturing sector in July. Supply and demand continued to improve, with supply stronger than demand. Employment lagged, remaining in contractionary territory. Costs gradually rose, with output prices on the decline, posing challenges for company profits. The market held on to positive sentiment, along with concerns about the economic outlook.

Japan PMI Manufacturing was finalized at 52.1 in July, down from June’s 52.7. That’s the lowest level since September 2021. S&P Global said there were renewed reductions in output and new orders. The softest rise in outstanding business 17 months was due to weaker demand. Rising prices and delivery delays led to accelerated stock building.

Usamah Bhatti, Economist at S&P Global Market Intelligence, said: “The headline PMI masked some worrying trends when looking at the underlying sub-indices, which add downside risks for the sector. New order inflows fell for the first time in ten months and at the fastest pace since November 2020, which contributed to a renewed contraction in production levels – the first since February.

Innes Willox, Chief Executive of Ai Group said: “The supply and labour constraints afflicting the Australian economy are weighing heavily on the manufacturing sector. Production and employment both fell in July, as manufacturers struggle with chronic labour shortages and supply chain interruptions. New orders rose this month, but our manufacturers simply can’t meet this demand without more workers.”

Intraday bias in GBP/USD is back on the upside as rebound form 1.1759 resumed after brief retreat. Further rally should be seen to 1.2405 resistance first. Firm break there will target 1.2666 key resistance next. On the downside, however, break of 1.2062 minor support will argue that the rebound is over, and turn bias back to the downside for retesting 1.1759 low instead. 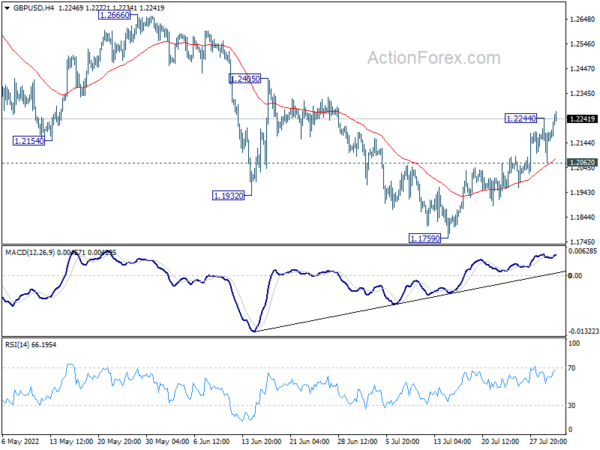 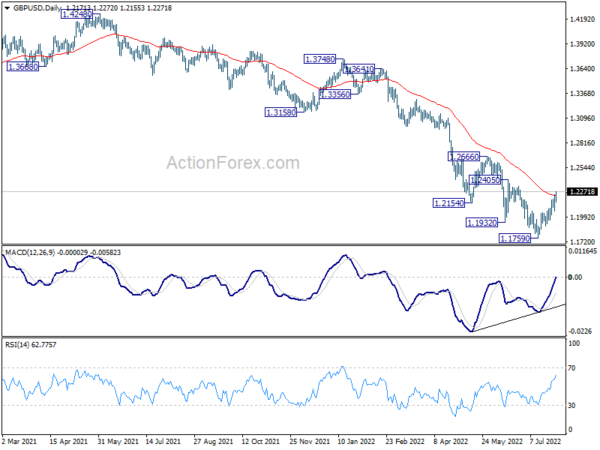