Dollar’s rally extends in early US session after solid economic data. Headline durable goods orders rose 1.7% in August, versus consensus of 1.0%. Ex-transport orders rose 0.2%, in line with expectation. Dollar traders are keenly looking forward to US President Donald Trump’s announcement of tax reform (or just tax cuts?). It’s reported that corporate tax rate would be brought down from 35% to 20% level. Top individual income tax rate will also brought down from 39.6% to 35%. Trump is scheduled to deliver a speech in Indianapolis later in the afternoon to promote his plan.

The greenback is also supported by Fed Chair Janet Yellen’s speech yesterday. In short, while there are concerns over inflation, Yellen still expect Fed to continue with gradual adjustments in the stance of monetary policy. And she also warned that adjustments in the stance of monetary policy, inflation will rise and stabilize at around 2 percent over the medium term." And, "without further modest increases in the federal funds rate over time, there is a risk that the labor market could eventually become overheated, potentially creating an inflationary problem down the road that might be difficult to overcome without triggering a recession." Hence, "we should be wary of moving too gradually."

It’s a know that German Chancellor Angela Merkel is having much difficulty in forming a coalition government after the election. The business-friendly FDP is the highly likely partner. Its leader Christian Lindner warned Merkel that "politics is not mathematics", and issues like immigration could derail an agreement of Merkel’s CDU/CSU, FDP and Greens. CDU’s sister party CSU is pushing for an annual cap of 200k migrant arrivals, but Merkel objects to a limit. FDP is asking for a Canadian like point based system but Greens will insist on family reunions. And if

The relationship with France and position on Euro reforms is also a key factors to consider. French President Emmanuel Macron delivered a high profile speech yesterday, outlining his visions for tighter integration of EU. But Macron has already drew mixed reactions from Germany. CDU’s Eckhardt Rehberg poured cold water to Macron and said "the problem in Europe is not a lack of money". And EU already has enough instruments to boost investments. Ifo head Clemens Fuest also criticized that Macron’s plans for the Eurozone are "wrong". A common finance minister won’t or a joint budget won’t solve the problems. Fuest said it’s " more important to ensure more stability in the financial sector and to reconcile liability and control in economic and financial policy."

RBNZ rate decision in a major focus in the upcoming Asian session. There is little chance for a move considering firstly, a new acting Governor Grant Spencer is in place. There are much political uncertainties after the general election last weekend. The central bank is widely expected to stand pat and keep the OCR unchanged at 1.75%. And, RBZN will likely also reiterate the concerns over the exchange rate. Technically, NZD/USD’s decline accelerates this week on the back of Kiwi weakness and Dollar strength. The development suggests that fall from 0.7557 is not completed yet. Further downside should be seen to 0.7130 first, and then 100% projection of 0.7557 to 0.7130 from 0.7432 at 0.7005 in near term. 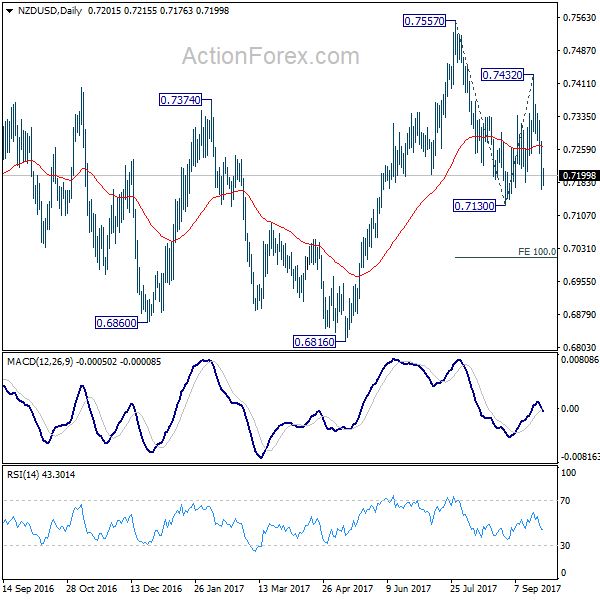 USD/JPY’s rise from 107.31 resumes by taking out 112.71 resistance and hits as high as 113.22 so far. Intraday bias is back on the upside for 114.49 resistance next. The break of medium term channel resistance argues that correction from 118.65 is already completed with three waves down to 107.31. Break of 114.49 will confirm this bullish case and target a test on 118.65 next. On the downside, break of 111.46 support is needed to indicate short term topping. Otherwise, near term outlook will remain cautiously bullish in case of retreat. 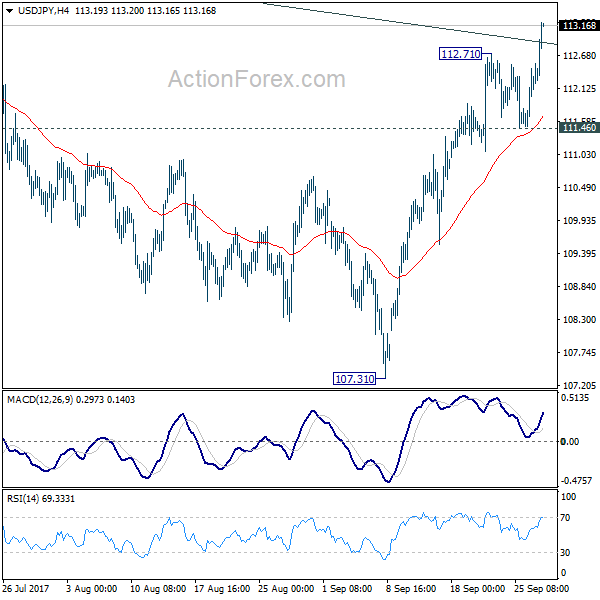 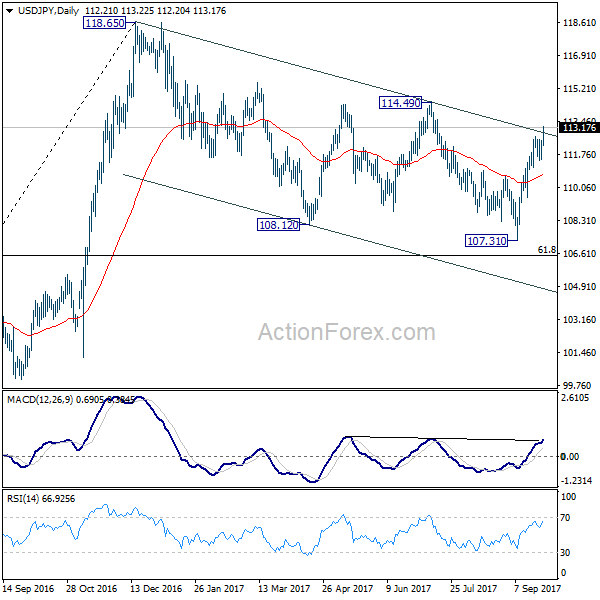