Dollar rises broadly in Asian session, extending the post-Powell rally. Risk-off sentiment is a factor giving the greenback another boost. At the same time, 10-year yield is back above 3.1% in Asia, giving Dollar another lift, and hammers Yen at the same time. The trend will likely continue for a while with an empty calendar today. But more volatility lies ahead with lots of heavy weight data scheduled later in the week, including US non-farm payroll report.

Technically, Gold resumes the decline from 1807.66 resumes by breaking through 1727.56 temporary low. Deeper fall should be seen as long as 1765.29 resistance holds, towards 1680.83 key support level. There is still prospect of a bounce from there to stage a near term bullish reversal. However, sustained break of 1680.83 will be a medium term bearish signal, and could also be a signal of more powerful, persistent rally in Dollar too. 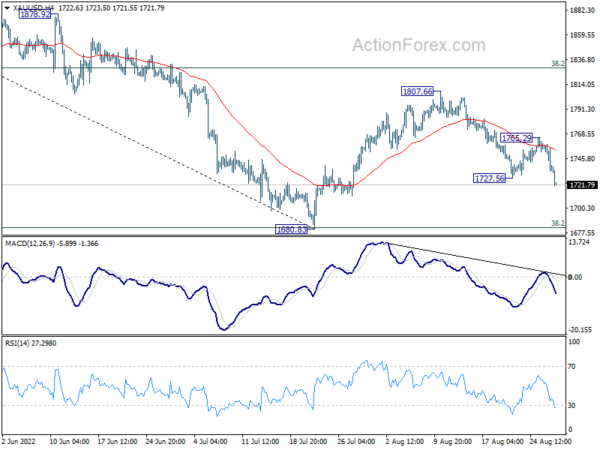 ECB board member Isabel Schnabel said, “Both the likelihood and the cost of current high inflation becoming entrenched in expectations are uncomfortably high. In this environment, central banks need to act forcefully.”

Governing Council member Martins Kazaks said, “Frontloading rate hikes is a reasonable policy choice. We should be open to discussing both 50 and 75 basis points as possible moves. From the current perspective, it should at least be 50.”

Another Governing Council member Francois Villeroy de Galhau said ECB needs to be at “neutral rate” before the end of the year, “after another significant step in September… Have no doubt that we at the ECB would if needed raise rates further beyond normalization: bringing inflation back to 2% is our responsibility; our will and our capacity to deliver on our mandate are unconditional.”

Governing Council member Olli Rehn said, “The reality is that we have excessively high inflation globally, also in Europe — that’s why it’s action time. The next step will be a significant move in September, depending on the incoming data and the inflation outlook.”

SNB Jordan: Inflation is increasingly spreading to goods and services

SNB Chairman Thomas Jordan said over the weekend, “There are signs that inflation is increasingly spreading to goods and services that are not directly affected by the pandemic or the war in Ukraine.”

“In fact, it appears that in the current environment, higher prices are being passed on more quickly — and are also being more readily accepted — than was the case until just recently,” he added.

Inflation expectations “have also been moving upwards slightly” and wage growth is “gathering momentum,” Jordan said, cautioning that the “longer-term outlook for monetary policy is also subject to high uncertainty.”

“In particular, a decline in global economic integration could increase companies’ price-setting power, meaning that they would be able to push through price increases more easily,” he said.

BoJ Kuroda: We have no choice other than continued monetary easing

“So we expect that by the end of this year, maybe inflation rate may approach 2 or 3%, but next year, inflation rate again decelerate toward 1.5%,” he said.

“We have no choice other than continued monetary easing until wages and prices rise in a stable and sustainable manner.”

“Turnover rose in five of the six retail industries in July 2022. This shows that, despite cost-of-living pressures, households are continuing to spend.”

Focus back to economic data, including US NFP, ISM and Eurozone CPI and China PMIs

Focuses will turn back to economic data this week. In particular, eyes will be of US non-farm payroll, which would be crucial for Fed officials to determine the size of the next rate hike in September. Also to be featured from the US include consumer confidence and ISM manufacturing.

USD/JPY’s rise resumes by breaking through 137.70 and intraday bias is back on the upside for 139.37 high. Strong resistance could be seen there to limit upside, to start the third leg of the corrective pattern from 139.37. Break of 136.17 minor support will turn bias back to the downside for 130.38 support. Nevertheless, decisive break of 139.37 will confirm up trend resumption for 147.68 long term resistance. 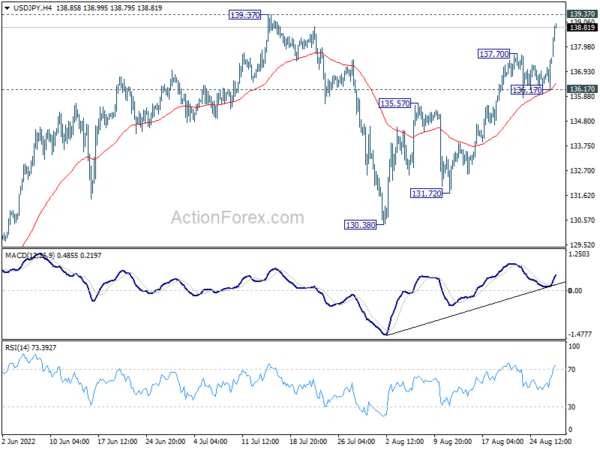 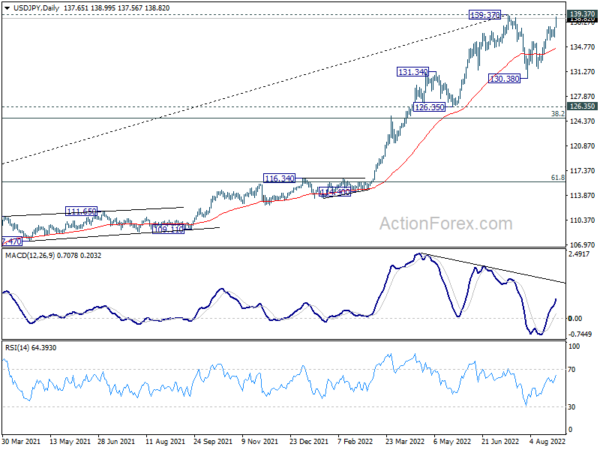