Sterling’s rebound extended further overnight as sentiment towards it continued to stabilized. Indeed, the Pound is trading up against Aussie and Canadian for the month. Sterling looks set to have a strong close for the week too. Commodity currencies are generally pressured today, together with steep decline in Japan Nikkei. But there is little risk aversion support to Yen. Dollar is mixed for now, overwhelmed by the comeback of Euro too.

Technically, GBP/CAD is now pressing an important cluster resistance. The levels include 1.5296 resistance, 55 day EMA (now at 1.5292), and 38.2% retracement of 1.7375 to 1.4069 at 1.5332. Rejection by this cluster resistance, followed by break of 1.4728 minor support, will argue that the rebound from 1.4069 has completed. That will also maintain medium term bearishness for down trend resumption through 1.4069 at a later stage. However, sustained break of this cluster should add to the case that the worst is over for the Pound, and open up stronger rise back to 61.8% retracement at 1.6112. We’ll probably find out which way next week. 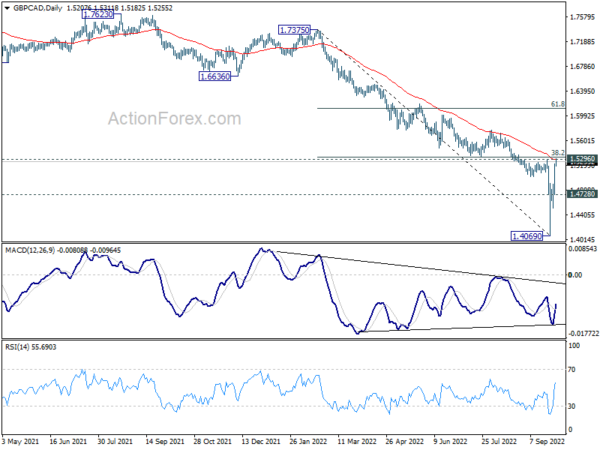 BoE Chief Economist Huw Pill said in a speech, “on the basis of the fiscal easing announced last week, the macroeconomic policy environment looks set to rebalance. Taken in conjunction with the macroeconomic impact of ensuing market developments, it is hard to avoid the conclusion that the fiscal easing announced last week will prompt a significant and necessary monetary policy response in November.”

The MPC forecasts will be the “vehicle” for making ” necessarily comprehensive assessment” on recent developments. The assessments will “embody recent evidence of weakness in economic activity, as well as the impact of the Government’s Energy Price Guarantee on headline inflation and wage and price setting behaviour.” They will factor in “the evolution of international commodity prices, not least developments in wholesale natural gas markets” and “impact of the Government’s Growth Plan and other fiscal announcements in detail.”

As for the gilt interventions announced by BoE this week, Pill emphasized it’s a “temporary and targeted financial stability operation”. It was “not a monetary policy operation”.

Fed Daly: Going to take restrictive policy at least through next year

San Francisco Fed President Mary Daly said yesterday she’s “quite comfortable” with the economic projections that interest rate will rise to 4-4.5% by the end of this year, and 4.5-5% next.

“It’s going to take restrictive policy for a duration of time to get clear and convincing evidence that inflation is getting back to 2% — so from my mind, that’s at least through next year,” she added.

“If inflation continues to print very high and we get no easing of inflation and only modest easing of labor markets, then that’s basically an economy that’s still got a lot of momentum, and inflation is still too high — we’re going to have to keep moving up because we are going to understand that the terminal rate isn’t as close as it would be,” she said.

Japan industrial production rose 2.7% mom in August, much better than expectation of -0.2% decline. That’s also the third consecutive month of growth. The Ministry of Economy, Trade and Industry expects production to rise further by 2.9% mom in September and then 3.2% mom in October.

Senior NBS statistician Zhao Qinghe said, “In September, with a series of stimulus packages continuing to take effect, coupled with the impact of hot weather receding, the manufacturing boom has rebounded. The PMI returned to the expansionary range… [The non-manufacturing index] remained above the threshold, with the overall expansion of the non-manufacturing sector decelerating.”

On the other hand, Caixin PMI Manufacturing dropped from 49.5 to 48.1, below expectation of 49.9. Caixin said production fell for the first time in four months amid quicker dropped in sales. Firms cut back on purchasing activity and inventories. Selling prices fell at quickest rate since December 2015.

later in the day, US personal income and spending, with PCE price index will be released, as well as Chicago PMI. 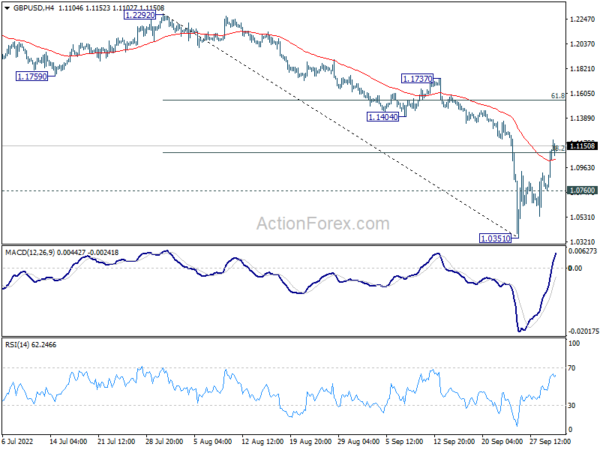 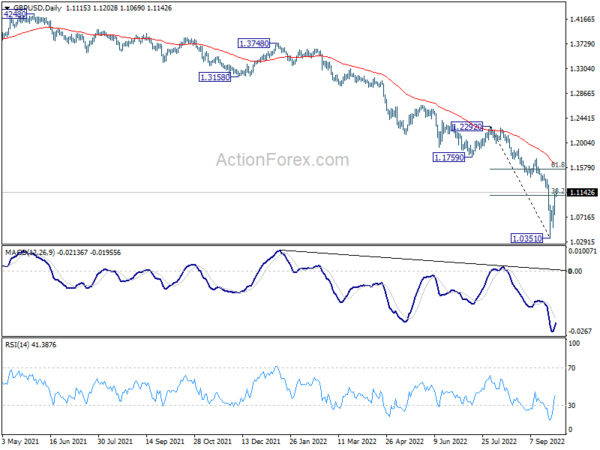