Yen rises broadly in Asian session on rumors that the Japanese government is considering to revive the joint statement with BoJ, which would loosen up the languages on the 2% inflation target, and set the stage for a policy change next year. Yet, any changes is likely only after a change in BoJ governor in April. Chief Cabinet Secretary Hirokazu Matsuno also denied the news. Anyways, Yen is currently the stronger one followed by Aussie and Sterling. Kiwi is the weaker one followed by Dollar and Euro. Overall markets mixed.

Technically, a focus of the week is whether Dollar could extend last week’s rebound and solidify a sustainable rally, especially against commodity currencies. Break of 0.6301 support in NZD/USD should confirm short term topping at 0.6512, on bearish divergence condition in 4 hour MACD. Deeper fall should then be seen to 38.2% retracement of 0.5511 to 0.6512 at 0.6103. 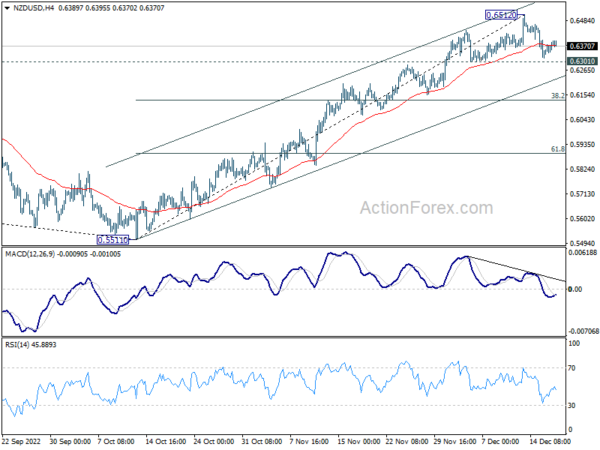 BusinessNZ chief executive Kirk Hope said: “With its sister survey the PMI again showing contraction in November and economic headwinds approaching, the easing of expansion in activity is not unexpected. Also, with the Global PSI result of 48.1 at a 29-month low, it will be a tall order for the New Zealand services sector to continue the overall trends experienced during the second half of 2022”.

BNZ Senior Economist Craig Ebert said that “November’s PSI proved, for the third month running, to be an important counterpoint to the weakening PMI. It looks as though the services industries – just like they did in Q3 – will more than make up for any weakness in manufacturing in Q4, such that GDP for that quarter manages an expansion”.

BoJ to stand pat, some more data before holidays

BoJ is widely expected to keep monetary policy unchanged this week. There were talks of a view in the policy framework some time next year, which would path the way for a policy change. The markets will listen carefully to Governor Haruhiko Kuroda for any hints on that. BoJ will also publish the minutes of last meeting. RBA minutes will also be featured. 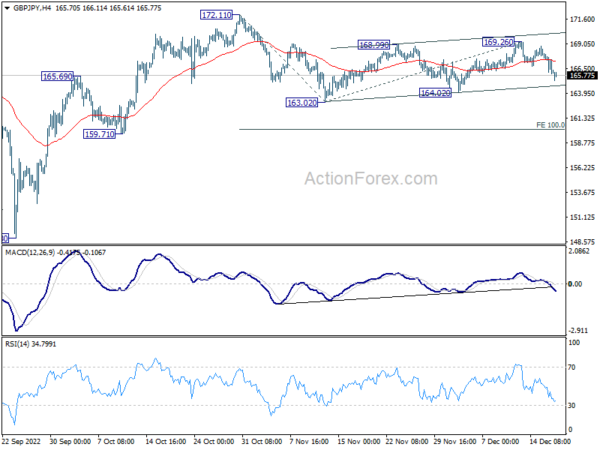 In the bigger picture, medium term upside momentum has been diminishing as seen in bearish divergence condition in weekly MACD. Sustained break of 55 week EMA (now at 161.26) will argue that it’s already correcting whole up trend from 123.94 (2020 low). Nevertheless, before that, such up trend could still extend through 172.11 high. 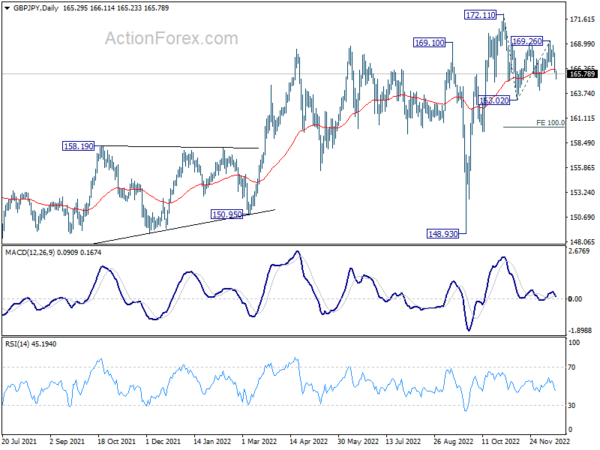