Market reactions to the US government shutdown is rather muted. Dollar is trading generally lower today but is held within Friday’s range. Asian markets are pretty steady with Nikkei trading down just -0.14% at the time of writing. The Senate was in session yesterday but failed to deliver any breakthrough. The shutdown is extending into its third day and there is no sign of a resolution in the Senate yet. A procedural vote is expected at noon today. But there are unlikely enough votes to pass the bill to keep government running through February 8. For forex traders there are so many key events ahead in the week that they couldn’t care less regarding the government shut down.

Big week for Yen with BoJ and CPI

The week ahead is full of key events and is particularly important for Yen and Euro. BoJ meeting and announcement is a major focus. There has been talk that BoJ is starting to consider policy normalization, given the improvements in the economy. Also, the summary of opinions in the December meeting showed there was a slight change in the board members’ thinking. One member noted that "when it is expected that economic activity and prices will continue to improve going forward, the situation may occur where the Bank will need to consider whether adjustments in the level of interest rates will be necessary."

For the moment, markets would like to get clear indications from BoJ that the massive stimulus is here to stay for some more time. There were unnamed sources quoted by Bloomberg saying that BoJ officials perceive markets expectation of stimulus withdrawal have well moved ahead of their own. And inflation is staying well off the 2% target without sign of any upthrust. In addition, the tweak in bond purchases this year carries no policy implications. That is, BoJ is still sticking to the yield curve control framework.

In addition to BoJ meeting, consumer inflation data to be released on Friday could also be a Yen mover.

Similarly important for Euro with ECB and data

Some ECB officials have recently talked about ending the EUR 30b a month asset purchase after September this year. The monetary policy account of December meeting also showed discussions on changing the central bank’s communications. These factors prompted speculations that ECB could drop the pledge to extend the asset purchase program if necessary. However, Reuters quoted an unnamed source saying that "market reaction to the minutes was excessive". Euro would likely be very sensitive to any change, or lack of change, in ECB’s forward guidance.

Besides, key economic data including German ZEW, Ifo, Eurozone PMIs will be released.

More in the calendar

Intraday bias in EUR/JPY remains neutral at this point. More consolidation would be seen in range of 133.03/136.63. But after all, outlook stays bullish with 133.03 support intact. Break of 136.63 will resume medium term up trend. However, on the downside, break of 133.03 will have 55 day EMA and medium term channel support firmly taken out. Also, considering bearish divergence condition in daily MACD too, that will suggest medium term reversal. Deeper fall should then be seen to 132.04 support for confirmation. 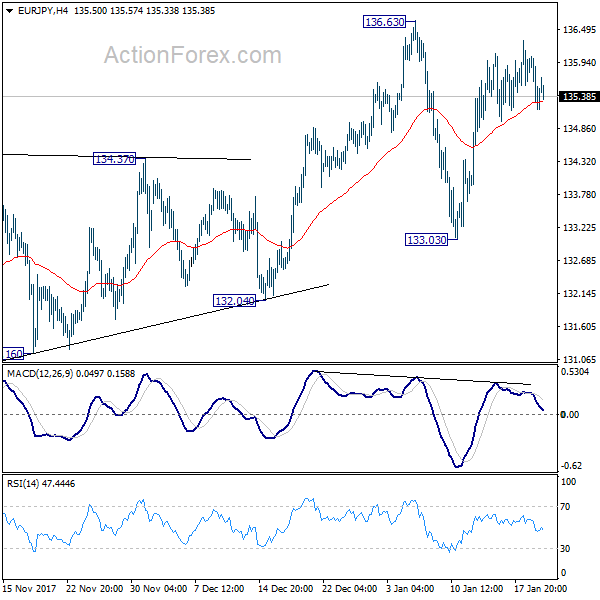 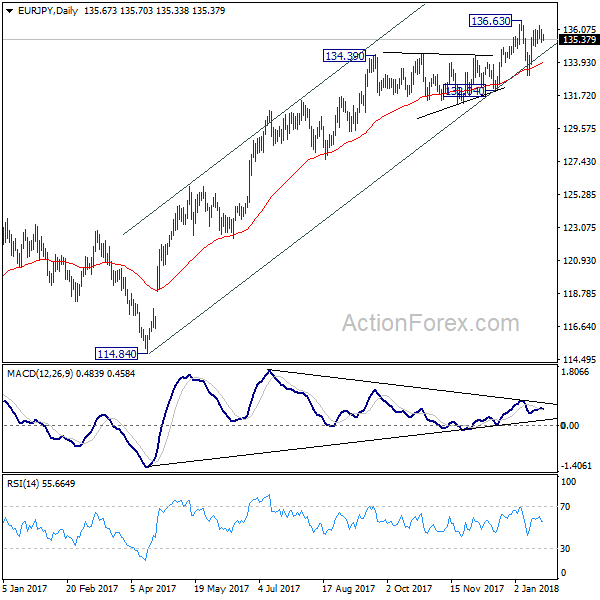