DJIA rebounded strongly overnight by closing up 150.52 pts or 0.73% at 20701.50. S&P also rebounded by gaining 16.98 pts or 0.73% to close at 2358.57. Some attributed the rebound to strong economic data. Conference Board consumer confidence jumped to 125.6 in March, hitting the highest level since December 2000. But from our point of view, the rebound in stocks were mainly technical driven. Strong support was seen in both DJIA and S&P 500 from 55 day EMA. Meanwhile, the rebound in stocks was also accompanied by yields and Dollar index. The development suggests that reversal Trump trade has at least passed the first climax even though there is no sign of it being completed yet. The focus is turned to Sterling selling as Brexit day finally arrives.

Fed Vice Chair Stanley Fischer sounded hawkish in his interview by CNBC. He said that two more rate hikes "seems about right" for this year. He noted that it is "the sensible thing to do" to watch and wait White House’s fiscal policies which jumping the gun on the results. US President Donald Trump’s failure on health care act changed Fischer’s "internal calculus" but the the overall economic outlook. Separately, Fed Governor Jerome Powell said Fed is "getting closer" to achieving maximum employment. Inflation is "still a bit short, but not terribly short" of target. He reiterated that "it’s appropriate if we stay on this path for us to gradually raise interest rates."

In Canada, BoC Governor Stephen Poloz emphasized that the "correlation between economic progress and openness" is "striking". And, "when trade barriers are falling, when people are coming to our shores and when investment is rising, Canadians prosper." In response to the current protectionist approach of US Trump, Poloz warned that "protectionism does not promote growth and its costs are steep." Regarding immigration, Poloz said that Canada would have to rely entirely on immigration in less than 30 years to maintain population growth. And, "take away the force of international migration since Confederation, and Canada would be around 10 million people, not 36 million as we are today."

Sterling weakness could be temporary

Sterling is sold off deeper as the Brexit Day finally comes. UK Prime Minister is schedule to trigger Article 50 today, nine months after the historical Brexit referendum last year. And, UK will officially end the 44 year old membership with EU. As the negotiation starts, there are three main focuses, immigration, trade relationship and the cost of the "divorce". It’s generally expected that EU leaders will take a tough stance considering the rise in euroskeptism, nationalism and populism in Europe in general. However, at the moment, there is no fresh news regarding Brexit and all should already be priced in the markets. Hence, while the pound stays bearish against Dollar, there is no fresh evidence of bearishness against the others yet.

GBP/USD’s sharp decline and strong break of 1.2468 minor support suggests that rebound from 1.2108 is completed at 1.2614 already. Intraday bias is turned back to the downside for 1.2108 support next. Overall, price actions from 1.1946 are viewed as a consolidation pattern pattern. Break of 1.2108 support will be the first sign of larger down trend resumption and would target 1.1946 low for confirmation. On the upside, above 1.2614 will bring another rise. In that case, we’d expect upside to be limited by 1.2705/2774 to bring down trend resumption eventually. 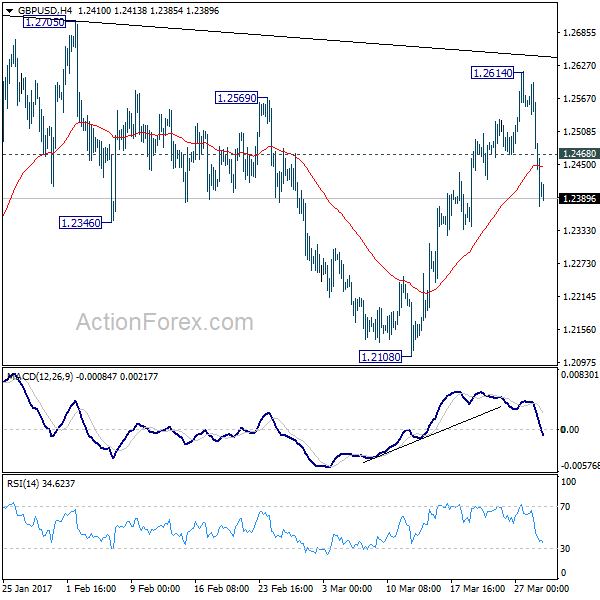 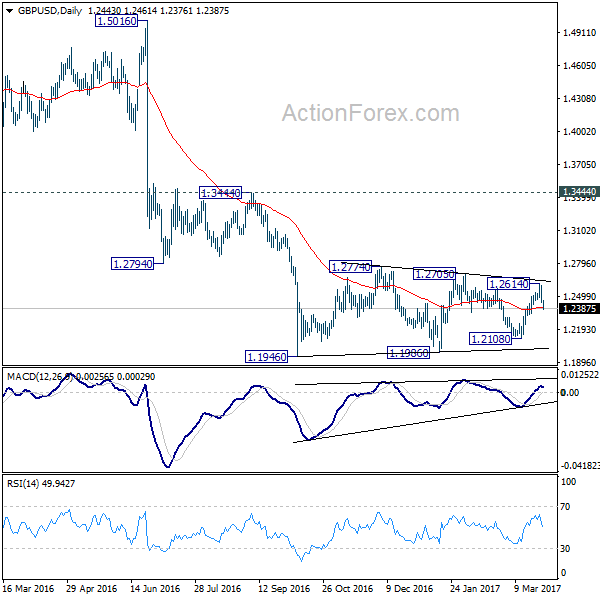