Sterling is trading broadly lower today as weighed down by weaker than expected services data. Concerns over UK’s own internal split regarding Brexit ne got it ion is also weighing down on the Pound. Nonetheless, loss is so far limited. GBP/USD is holding above 1.4, EUR/GBP well below 0.9828, GBP/JPY also well above 151.95 support. The key to Sterling’s trend will remain on the BoE Super Thursday. Yen is trading broadly higher today as global stock market rout continues but the Swiss Franc doesn’t follow. And indeed, Aussie and Kiwi follow as the next strongest ones.

UK PMI services dropped to 53.0 in January, down from 54.2 and missed expectation of 54.1. Markit noted that, along with other PMI figures, the gauges indicated sharp slow down in economic growth in the UK. And, "the January slowdown pushes the all-sector PMI into dovish territory." Chief business economist Chris Williamson added that "with the survey also indicating weaker upward price pressures, the data therefore cast doubts on any imminent rise in interest rates." Released last week, PMI manufacturing dropped to from 56.2 to 55.3. More seriously, PMI construction dropped from 52.2. to 50.2.

BoE on Thursday will be the major focus for the week with quarterly Inflation Report featured. There are increasing speculations that BoE would pull ahead the next rate hike. In a Bloomberg survey, 13 out of 32 economists predicted the next hike coming as soon as in May. Another 5 predicted it to happen in August. The economic projections to be published in the Inflation Report will be a key to such market expectations. But the determining factor would be the outcome of the Brexit transition agreement with EU.

EU chief Brexit negotiation Michel Barnier is meeting UK Theresa May and Brexit Secretary David Davis for the first time since December today. Since last week, the debate on whether UK should remain within a customs union with the EU heated up, causing serious split inside Conservatives. Barnier said the EU "knew the line of the government". He emphasized "we have to respect the red lines of the British government, but they have to respect the rules of the Union".

ECB: Impact of US tax reform "highly uncertain and complex

ECB said in a short article today that the tax report in the US will provide a "significant fiscal stimulus" to growth in the U.S. and would be "positive in the short term." However, the impacts on the Eurozone are "highly uncertain and complex" including tax base erosion. It noted that "Lower U.S. corporate tax rates raise the tax attractiveness of the United States relative to other countries." And, "prior to the reform, the U.S. corporate tax rate stood above the rates of all large euro area countries, while, after the reform, it is close to the lower end of rates in those countries."

Eurozone Sentix investor confidence dropped to 31.9 in February, down from 32.9 and missed expectation of 33.2. Sentix said in the release that "the recovery process in the Eurozone is… continuing, although the first clouds are appearing in the blue economic sky". It added that "negotiations on forming another grand coalition aren’t going down well with investors". And the figure was "a vote of no confidence in a grand coalition" in Germany. Also from Eurozone, Services PMI was revised up to 58.0 in January. Retail sales dropped -1.1% mom in December.

In Germany, Chancellor Merkel’s CDU/CSU and the Social Democrats couldn’t conclude the coalition negotiations in time to meet the self-imposed deadline of Sunday. The talks will enter into extra time today. On the positive side, agreements were made on housing and digital economy. But, it’s believed that two key issues remain on the table, including SPD’s demand to tighten up rules for businesses to grant temporary contracts, and aligning doctors pay between private and public health care. 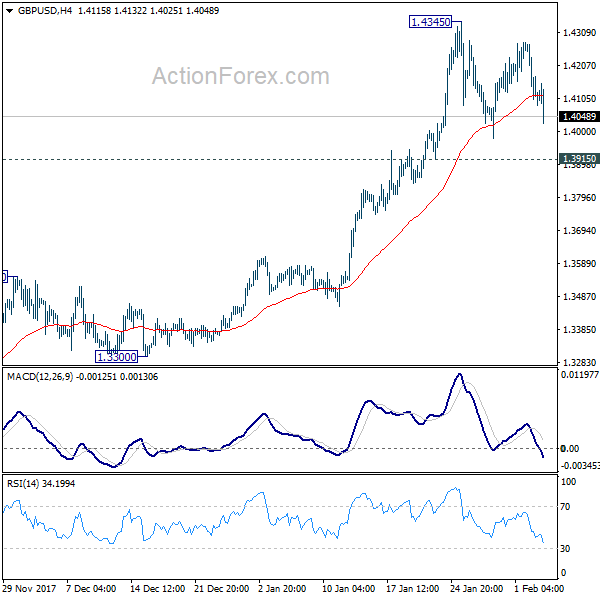 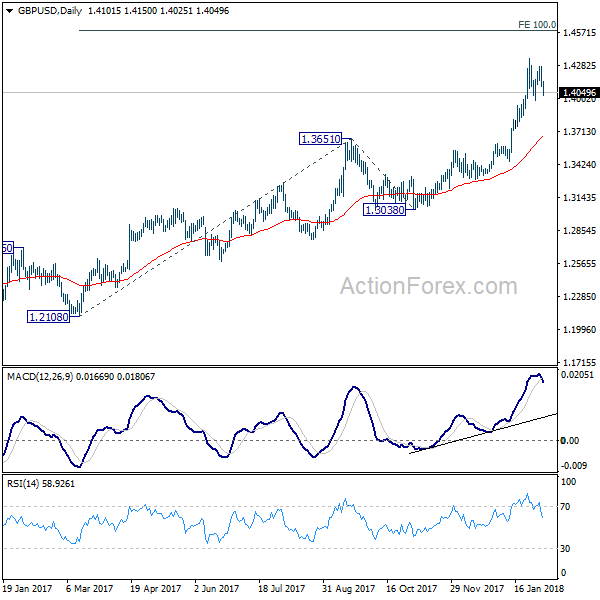