Sterling jumps broadly after Reuters reported that UK Junior Brexit Minister Robin Walker said it’s very close to transition deal with the EU. But so far, no detail is reported yet. Meanwhile, Australian Dollar remains one of the strongest one today, together with the Japanese yen. Canadian Dollar is trading the the weakest one so far as last week’s rebound lost steam. Euro is followed as the second one while Dollar is the third weakest. Officials from both sides continue to exchange words regarding trade relationship.

An update on Trump and EU

US president Donald Trump tweeted this morning (US time) that “Secretary of Commerce Wilbur Ross will be speaking with representatives of the European Union about eliminating the large Tariffs and Barriers they use against the U.S.A. Not fair to our farmers and manufacturers.” That’s seen as a follow up to his tweet over the weekend that “the European Union, wonderful countries who treat the U.S. very badly on trade, are complaining about the tariffs on Steel & Aluminum.” And he warned, “if they drop their horrific barriers and tariffs on U.S. products going in, we will likewise drop ours. Big Deficit. If not, we Tax Cars etc. FAIR!”

ECB Governing Council member Jan Smets said that “inflation pressures could take more time to build.” He pointed out that “the level of potential output may have become higher due to structural reforms and… slack may be bigger.” Meanwhile, he also emphasized it’s “absolutely crucial” to meet the inflation target and “not accept a level below that:. Regarding growth, Smets said it’s “too early to conclude that growth is plateauing.” He added that “come soft indicators have been a bit weaker but the recovery is on solid footing and we are in a clear, expansionary period.”

ECB Executive Board member Benoit Coeure reiterated that interest rates will stay at “very low levels”, “far beyond the end of QE. Like many others, he pointed out “inflation is not quite where we would like it to be.” Meanwhile, he also noted that was discussion on a first rate hike in mid-2019

North Korea quiet on meeting with US

North Korea leader Kim Jong-un is set to meet with Trump by the end on May on the topic of denuclearization. It’s reported that Kim would want to have a peace treaty with the US. But other than that, the country is so far very quiet on the topic. South Korea’s Ministry of Unification spokesman Baik Tae-hyun said today that “we have not seen nor received an official response from the North Korean regime regarding the North Korea-U.S. summit.” And, “I feel they’re approaching this matter with caution and they need time to organize their stance.”

GBP/USD rebounds strongly today. But it’s still staying below 1.3929 resistance. Intraday bias remains neutral first. On the upside, firm break of 1.3929 will be the first sign of reversal. That is, the choppy pull back from 1.4345 could have completed at 1.3711 already. In this case, intraday bias will be turned back to the upside for 1.4144 resistance for confirming this bullish view. On the downside, break of 1.3711 will resume the decline from 1.4345 through 1.3651 resistance turned support. At this point, we’ll look for strong support from 38.2% retracement of 1.1946 to 1.4345 at 1.3429 to contain downside and bring rebound. 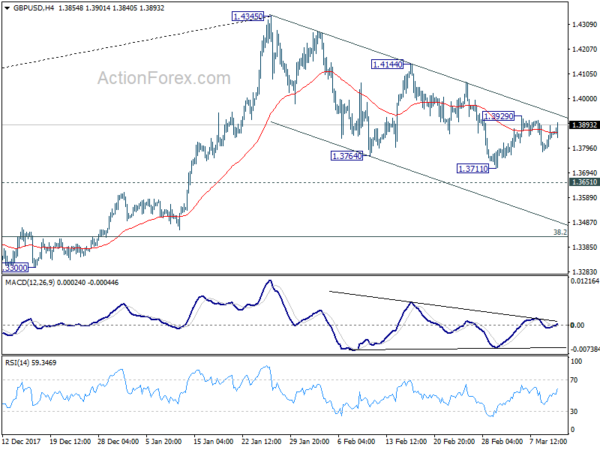 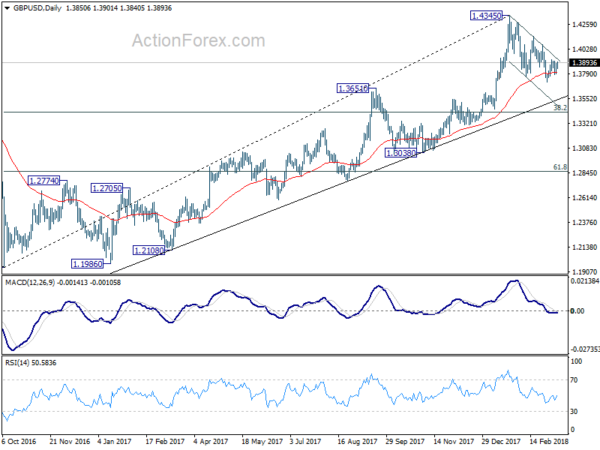