Euro and Sterling trade notably lower today as economic data missed expectation. Sterling remains relatively firm and stays as the strongest major currency for the week. The CPI miss was just 0.1% yoy, and Brexit transition deal should still give BoE policy makers a confidence boost. Euro, on the other hand, is much more troubled as deterioration in German ZEW was quite considerable. The trades mildly generally firmer today as markets await FOMC rate hike tomorrow. Before that, eyes will be on whether G20 leaders would come up with something against protectionism and trade war in their joint communique.

UK headline CPI slowed to 2.7% yoy in February, down from 3.0% yoy and missed expectation of 2.8% yoy. Core CPI slowed to 2.4% yoy, down from 2.7% yoy and missed expectation of 2.5% yoy. The reading doesn’t give any added pressure for BoE to rate interest rate in May. Nonetheless, CPI stays above the mid-point of 2-3% target range. BoE board members should still view the Brexit transition deal as a relief to businesses. And investors could come back with, at least, part of the uncertainties cleared. Known hawks like Michael Saunders and Ian McCafferty could still start pushing for rate hike during this week’s meeting.

German ZEW economic sentiment dropped to 5.1 in March, down from 17.8, below expectation of 13.0. Current situation gauge dropped to 90.7, down from 92.3, above expectation of 90.0. Eurozone ZEW economic sentiment also dropped sharply to 13.4, down from 29.3, missed expectation of 28.1.ZEW titled the release as “Economic Outlook Worsens Considerably” which is an indication of how bad things turned. ZEW President Professor Achim Wambach noted that “concerns over a US-led global trade conflict have made the experts more cautious in their prognoses. The strong euro is also hampering the economic outlook for Germany, a nation reliant on exports.” But he added that “combined with the experts’ continued positive assessment of the current situation, however, the outlook is still largely positive.”

In the Swiss State Secretariat for Economic Affairs report published today, the government painted a brighter picture of the economy. Growth forecasts for 2018 and 2019 were both revised up. Also, 2018 inflation forecast was revised notably higher. The report titled Economy continues dynamic recovery noted that “the economy to continue its dynamic recovery and anticipates strong GDP growth of 2.4% in 2018. The buoyant international economy is supporting foreign trade, while a favourable investment climate is stimulating domestic demand.”

The tone of the report was very upbeat as it said “Switzerland’s economy has not looked this healthy since the minimum euro exchange rate was discontinued in early 2015. The upturn gathered increasing momentum and became more broad-based in the second half of 2017.” “The Expert Group predicts that foreign trade will provide a significant boost to growth in 2018 especially but also in 2019.”

Regarding economic risks, SECO saw short-term positive and negative risks are “balanced”. But it warned that “protectionist measures recently announced in the US pose negative risks for the global economy.” And, “any escalation to a trade war between the major economic zones would have a considerable dampening effect in the medium-term.”

More about the report here.

Also from Swiss, trade surplus widened to CHF 3.14b in February, above expectation of CHF 1.87b.

The RBA minutes for the March contained little surprise. Policymakers remained concerned about the soft inflation outlook, noting faster wage growth is needed to assure a stronger and more sustainable improvement on inflation. As suggested in the minutes, “employment had grown strongly and the unemployment rate had fallen over the preceding year. However, the improvement in overall conditions had not yet translated into a definitive pick-up in wages growth, which remained low”. It added that “further progress on these goals [reducing the unemployment rate and bringing inflation closer to target] was expected over the period ahead, but this process was likely to be gradual”. Also from Australia, house price index rose 1.0% qoq in Q4 versus expectation of 0.0% qoq.

More on RBA minutes in RBA Minutes Reiterated The Impacts Of Low Wage Growth On Inflation.

Masazumi Wakatabe said that BoJ sounded cautious as he said BoJ should avoid premature shift in monetary policy. Also, in his view, the central bank shouldn’t hesitate to ease monetary policy further if needed. Nonetheless, she acknowledged that various economic data already showed the positive impacts of current and past ultra loose policy.

Masayoshi Amamiya, also emphasized the importance to continue with powerful monetary easy, for achieving improvements in the output gap. He acknowledged that Japan is no longer in deflation. But BoJ hasn’t meet its 2% inflation target yet.

EUR/USD’s sharp fall today now put 1.2257 support back into focus. Intraday bias is turned neutral first. For the moment, we’re slightly favoring the case that price actions from 1.2445 are corrective in nature. And 1.2257 support should hold even in case of a brief breach. Another rise is expected and break of 1.2445 will target a test on 1.2555 key resistance. However, sustained break of 1.2257 will dampen this bullish view. In that case, intraday bias will be turned back to the downside, to resume the fall from 1.2555 through 1.2154. 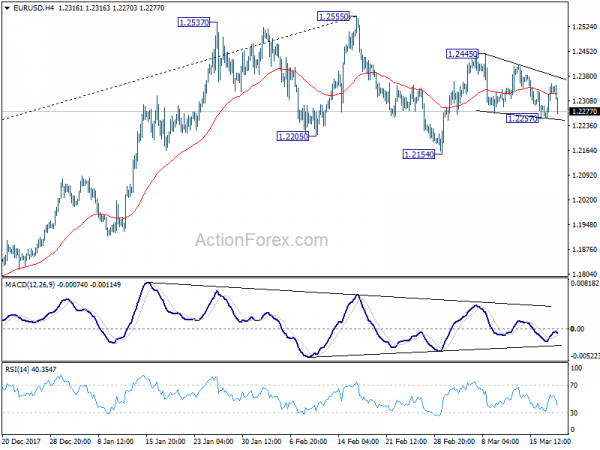 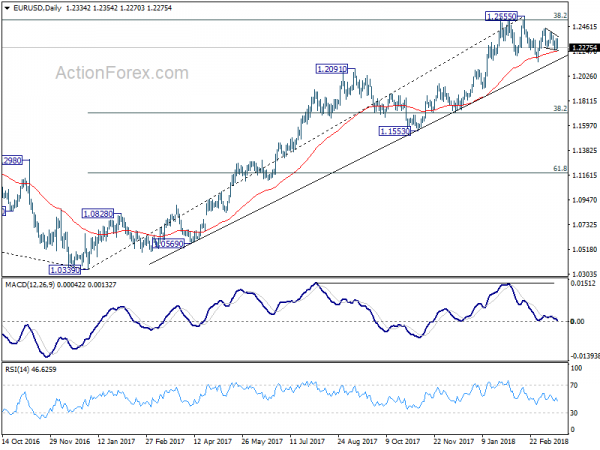