Markets Tread Water as Traders’ Minds are Already on Holiday

The forex market are starting to ignore economic data release today and tread water, just ahead of long weekend. Dollar is trading in black across the board for the week. But better than expectation job data doesn’t the greenback a boost to extend its rally. Canadian Dollar also shrugs off worse than expected GDP data and stays as the second strongest for the week. Meanwhile, Yen and Swiss France are the weakest.

Philadelphia Fed President Patrick Harker said in a WSJ interview that he now expects three Fed rate hike this year. Harker is seen as on the dovish side of the spectrum as he previously projected just two hikes in 2018. He pointed to “some firming of inflation” as he reason for the upgrade is his own forecast. He also clarified that he placed more emphasis on inflation than fiscal policy. Nonetheless, Harker also sounded cautious on trade tensions. He noted that risk of increasing trade tariffs as a source of uncertainty for both economic projections and monetary policy.

ECB Governing Council member,  Dutch central bank Governor Klaas Knot talked about monetary policy as he  presented his bank’s annual report in Amsterdam today. He emphasized that the top priority for ECB now is to “normalize monetary policy and strengthen the economic and monetary union”. And, market expectations of ECB’s policy action “have more or less converged at what I call a sweet spot”, with ” a fair degree of consensus around these expectations.”Therefore, the likelihood of being “too cautious” is a bit larger than being “too bold”.

Regarding trade relationship with the US, he said “he question is if Europe will come with countermeasures which could make us slip into a trade war.” But he also emphasized that ” if the US were to implement trade restrictions on say steel, it will be the American consumer paying the price.”

Swiss KOF economic barometer dropped to 106.0 in March, down from 108.4, below expectation of 107.2. KOF noted in the release that “notwithstanding this decline, the present position is still on a level clearly above its long-term average.” This indicates that in the near future the Swiss economy should continue to “grow at rates above average”.

Gfk noted in the release that “the prospect of wage rises finally outstripping declining inflation, high levels of employment with low-level interest rates, and finally some movement on the Brexit front appear to have boosted our spirits.” While it’s “still a little early to be talking about green-shoots”, “this is definitely a movement in the right direction”.

Japan retail sales rose 0.4% mom, 1.6% yoy in February, slightly higher than expectation of 0.6% mom, 1.7% yoy. And it’s marked improvement from January’s -1.6% mom, 1.5% yoy. It’s noted that consumer spending could be at the beginning of mild recovery. Improvement is also seen lately in the labor market. Overall picture suggests that consumption is going to pick up momentum. And that should eventually help lift inflation. But for now, core inflation is still way off BoJ’s 2% target and it will take some more time for BoJ to start considering stimulus exit.

Japan FM Aso: No bilateral trade negotiations with US

Japan finance minister Taro Aso said in the parliament that historically, US Dollar always rise against Japanese Yen when interest rate differentials widened to 3%. Aso added that US interest rates will “undoubtedly rise ahead”. And therefore, there won’t be “one-sided” Yen appreciation that could hurt the economy.

No change in USD/CHF’s outlook. Rebound from 0.9186 is still in progress but it’s seen as a corrective move. Hence, we’d expect strong resistance from 0.9626 key fibonacci level to limit upside. On the downside, break of 0.9432 support will indicate near term reversal and completion of rebound from 0.9186. In this case, intraday bias will be turned back to the downside for retesting 0.9186 low. However, sustained break of 0.9626 will be another evidence of larger reversal. In this case, further rise would be seen to next fibonacci level at 0.9900. 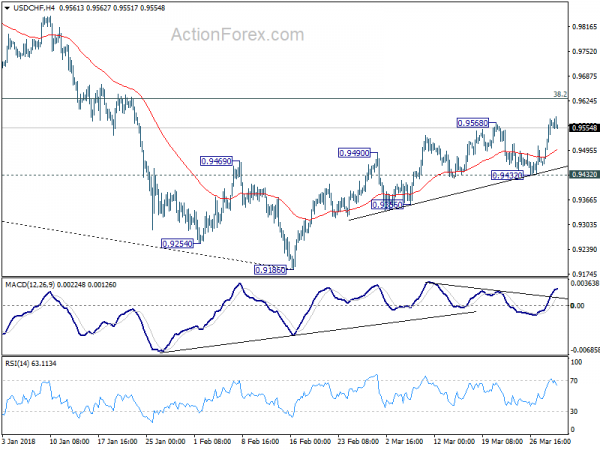 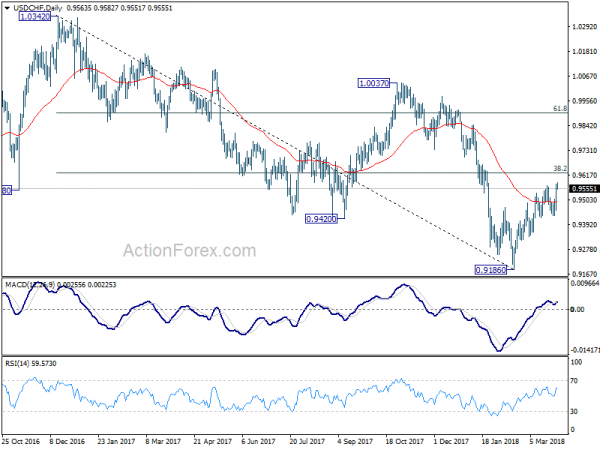