Action Forex
HomeAction InsightMarket OverviewRisk Aversion Comes Back on Syria Tension, Dollar Gets No Help from...

Risk Aversion Comes Back on Syria Tension, Dollar Gets No Help from CPI

Risk aversion comes back to the markets today. Syria tension comes into spotlight and US-China trade war leaves the stage temporarily. DAX turned south at initial trading and never looked back. It’s currently trading down -1% at the time of writing. CAC id down -0.67% while FTSE is down -0.22%. US futures also point to lower open, with DOW likely heading back towards 24000 handle. In the currency markets, Yen and Swiss Franc are trading as the strongest one entering into US session. Sterling suffered some selling after data misses. For the day so far, Yen is the strongest one followed by Euro. Australia Dollar and Canadian Dollar are the weakest.

US President Donald Trump is a master in escalating tensions with his tweets, no one can beat that. The financial markets are rocked again after Trump said in his usual morning tweet that “Russia vows to shoot down any and all missiles fired at Syria. Get ready Russia, because they will be coming, nice and new and ‘smart!’ You shouldn’t be partners with a Gas Killing Animal who kills his people and enjoys it!” The tweet triggered concerns that if, intentionally or unintentionally, any US strike causes Russian casualties, there would be an escalatory cycle that worsen the situation in Syria further.

US CPI and core CPI accelerated in March, FOMC minutes next

Released from the US, headline CPI dropped -0.1% mom in March, below expectation of 0.0% mom. But annual rate accelerated to 2.4% yoy, up fro 2.2% yoy and met expectation. Core CPI rose 0.2% mom, 2.1% yoy, up from 1.8% yoy in February, and met expectations. The set of data should ease some inflation worries of Fed policymakers. But they are providing no support to Dollar. Focus will turn to FOMC minutes next.

The main question in reading the FOMC minutes is whether Fed is more likely to stick with its projection of having three hikes in total this year. Or, it’s more likely to hike four times. During the March meeting, among the 15 top Fed policymakers, 8 had two or fewer hikes for this year in the famous dot-plot. On the other hand, 7 had three or more. This showed quite a divergence between Fed hawks and doves. And the minutes could reveal more about the debates inside FOMC.

But after all, it should be noted that with easing concerns over trade war, traders are back putting their bets on a June hike. As indicated by fed funds futures, chance of a 25bps June hike surged sharply this week to 95%. But that provides little support to Dollar so far. The greenback might not get any sustainable boost even it the Fed minutes turn out to be more hawkish than expected.

ECB President Mario Draghi spoke at the Generation €uro Students’ Award today. He said that EU cannot solve its problem just at national levels. And, more integration will allow EU to face economic challengers more effectively. Draghi also sounded easy regarding recent escalation in trade tension between US and China. In his view, the impact of the tariffs “announced” is small. Nonetheless, this could still hurt investor confidence. And Draghi emphasized that while “the direct effects are not big… in the end the key issue is retaliation.”

Separately, ECB governing council member Ardo Hansson said recent low inflation in the euro area has been the result of “a combination of factors.” And, most of these factors are “temporary in nature”. Therefore, impact from these factors will “weaken over time”. Therefore, Hansson said “we need to be more patient in achieving our price stability goal.” Nonetheless, ECB still has to monitor the side effects of policy carefully.

The Confederation of British Industry published a report showing that UK business overwhelming prefer to stay with EU rules after Brexit. Carolyn Fairbairn, CBI Director-General said that for the majority of businesses, “diverging from EU rules and regulations will make them less globally competitive, and so should only be done where the evidence is clear that the benefits outweigh the costs.” She emphasized that the report comes from “heart of British business” and it provides “unparalleled evidence to inform good decisions that will protect jobs, investment and living standards across the UK.” Additionally, she urged “major acceleration” in the partnership between businesses and the government to deal with Brexit issues.

RBA Lowe: No strong case for near term adjustment in interest rate

BA Governor Philip Lowe devoted a section on monetary policy is his address to Australia-Israel Chamber of Commerce (WA) today. And, he brought out four broad points.

Firstly, he expects a “further pick-up” in the Australian economy, with increased investment, hiring and exports. Inflation is also expected to “gradually pick up” with wages growth too. But there are uncertainties “lying in the international arena”. Lowe warned that “a serious escalation of trade tensions would put the health of the global economy at risk and damage the Australian economy”. And, “we also have a lot riding on the Chinese authorities successfully managing the build-up of risk in their financial system.” Domestically, the level “high level of household debt remains a source of vulnerability”.

Secondly, the next interest rate move will likely be “up, not down”. And that might “come as a shock to some people”. Thirdly, inflation returning to midpoint of target zone is expected to be “only gradual”. And, “it is still some time before we are likely to be at conventional estimates of full employment. Fourthly, and most important to the markets, “Reserve Bank Board does not see a strong case for a near-term adjustment in monetary policy.” Lowe reiterated that other global central banks have lower policy rates than Australia “over the past decade”. So, the situations are different.

IMF Lagarde: Sun is still shining but we have to “steer clear of protectionism”

In a speech at the University of Hong Kong, IMF Managing Director Christine Lagarde expressed her optimism on the global economy. She said the “economic picture is “mostly bright” and “the sun is still shining”. Global momentum is driven by “stronger investment”, “rebound in trade” and “favorable financial conditions”. She said the forecast to be release next week will “continue to be optimistic”.

Regarding advanced economies, Lagarde said Eurozone’s upswing is “now more widely spread across the region”. US growth will “likely accelerate further due to expansionary fiscal policy”. In Asian emerging markets, China and India lead by “rising exports and higher domestic consumption. But she also warned of “darker clouds looming”. Momentum in 2018 and 2019 will eventually slow because of “fading fiscal stimulus” in the US China, rising interest rates and tighter financial conditions.

Lagarde emphasized three priorities for the global economy, including 1. Steering clear of Protectionism, 2. Guard against Fiscal and Financial Risk, 3. Foster Long-term Growth that Benefits Everyone.

New People’s Bank of China Governor Yi Gang pledged to further open the financial markets in the Boao Forum for Asian in China. And some specifics were offered by Yi too. Firstly, the government will remove foreign ownership caps on Chinese banks by the end of June. Secondly, foreign securities and life insurance companies will be allowed to hold majority stakes in their Chinese counterparts. That is, ownership could be raised from 49% to 51%. And such restriction will also be abolished in three years. Thirdly, by the end of June, the permitted business scope for foreign insurance agents will be expanded. Fourthly, the daily quota for foreign investors to buy Chinese stocks and for Chinese investors to buy Hong Kong traded stocks will be quadrupled. In addition, by the end of 2018, China will launch a trading link between Shanghai stock markets to London’s. Separately, Yi also said that China won’t devalue Yuan as part of the moves of trade war with the US. 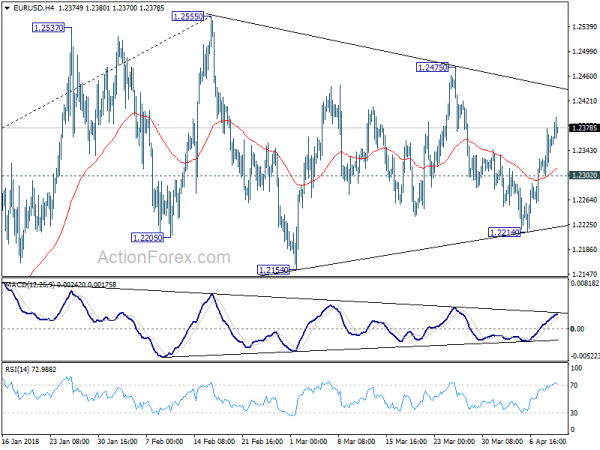 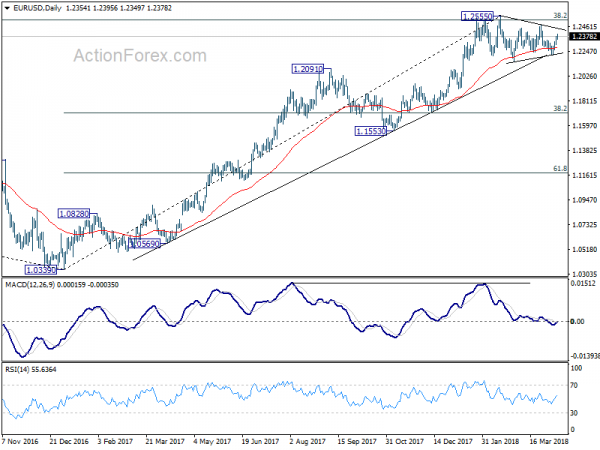