Dollar traded mixed overnight as while 10 year yield breached 3% handle, there was no follow through selling in bonds that kept it above that level. On the other hand, the situation was complicated by the selloff in stocks due to earnings, which propelled Japanese Yen briefly higher. The greenback is regaining strength in Asian session. In particular, Dollar is already extending recent rally against Aussie, and Swiss Franc. With an exceptionally light calendar today, intermarket movements will be the main driver in FX.

The economic calendar is exceptionally light today. Asian session was already quieter than usual with Australia and New Zealand on holiday. Japan released all industry activity index which rose 0.4% mom in February and that triggers little reaction in the markets. Looking ahead, Italy is on bank holiday today. Credit Suisse will release economic expectation for Swiss. China will release conference board leading index. US will release crude oil inventories. BoC Governor Stephen Poloz will speak today too. And traders will look through today’s event for ECB rate decision tomorrow, and Q1 GDP of US and UK on Friday.

Having said that, the interaction between different financial markets would probably be the drivers today.

US 10 year yield edged higher to 3.003 overnight and breached 3% handle briefly. Then, it failed to sustain above 3% and closed at 2.983, up only 0.010. Bear in mind again that 3% is an important psychological level for many investors. And there is a key resistance of 3.036, 2013 high. These could both limit the strength of TNX for the very near term.

If the markets movements unfold like the above today, that is, stocks tumble and yield struggles to advance, we could see a reversal of fortune in Aussie and yen. That is, firmness in US yields will pressure both Aussie and Yen. But in case of risk aversion triggered by other factors, like earnings, Yen could be supported by risk aversion. This would be an interesting point to watch today. 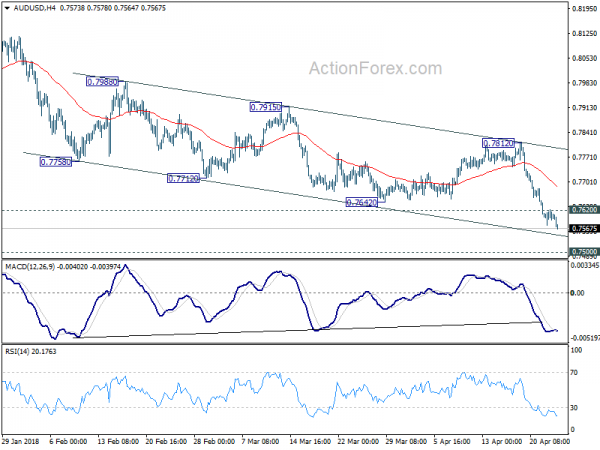 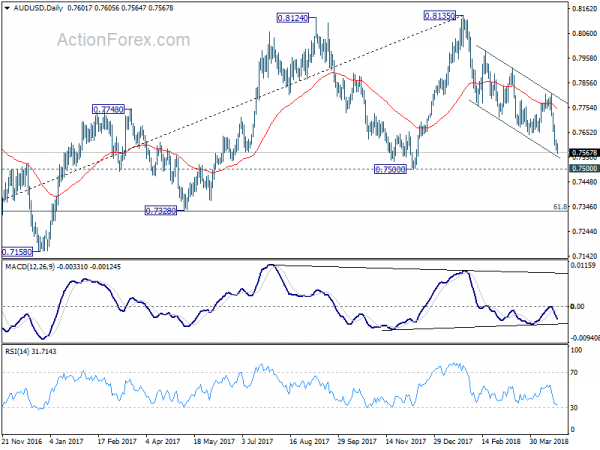