Dollar edges mildly higher in early Asian session today but quickly turned mixed. The greenback is somewhat supported by comments from Fed officials. St. Louis Fed President James Bullard echoed some other officials and said Fed could start winding down its $4.5T balance sheet later this year. But in that case for Bullard, it would become less necessary to raise interest rate. On the other hand, New York Fed President William Dudley said on Friday that shrinking the balance sheet would only prompt a "little pause" in tightening.

Fed balance shrinking should be considered in March projections

We’d like to remind our readers that Dollar suffered selloff last month when Fed’s new economic and interest rate projections disappointed. That was, in spite of recent solid economic data (except Friday’s NFP of course), Fed maintained projection of three hikes this year and in 2018. And the minutes released last week showed FOMC members have already discussed the topic of unwinding the balance sheet. That is, Fed’s rate projection should have that "little pause" Dudley mentioned considered. In other words, the talk of balance sheet normalization shouldn’t alter Fed’s rate path.

Fed chair Janet Yellen will speak today and markets will look into hints of her view on rate and balance sheet. But we’d like to maintain our view that economic data including inflation and employment will remain one of the two main driving forces in Fed’s outlook. US President Donald Trump’s implementation of his election promises of fiscal stimulus would be another factor, and possibly the more important one.

Bank of Canada rate decision on Wednesday will be a major focus this week. BoC is widely expected to keep interest rate unchanged at 0.50%. The tone of the statement could remain slightly dovish in spite of improvements in economic data. Nonetheless, Canadian Dollar will likely follow more on oil prices as WTI crude oil could be heading back to 55.24 resistance due to geopolitical tensions.

In addition to that, UK CPI and employment, German ZEW, China CPI, PPI and trade balance, Australia employment, US CPI and retail sales will be closely watched in a holiday shortened week, ahead of long weekend.

AUD/USD’s fall from 0.7748 continues today and breaches 0.7490 support. The development indicates that rise from 0.7158 is already completed at 0.7748. And, near term trend has reversed Intraday bias stays on the downside for 0.7144/58 support zone next. On the upside, above 0.7351 minor resistance will turn bias neutral and bring recovery. But upside should be limited by 0.7586 support turned resistance to bring fall resumption. 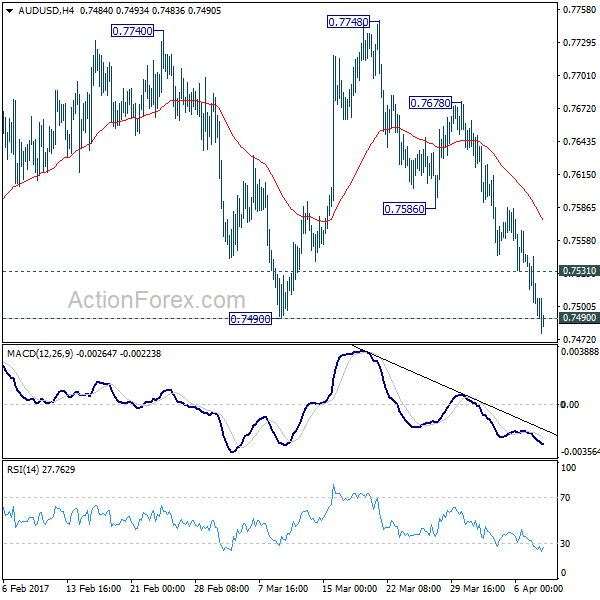 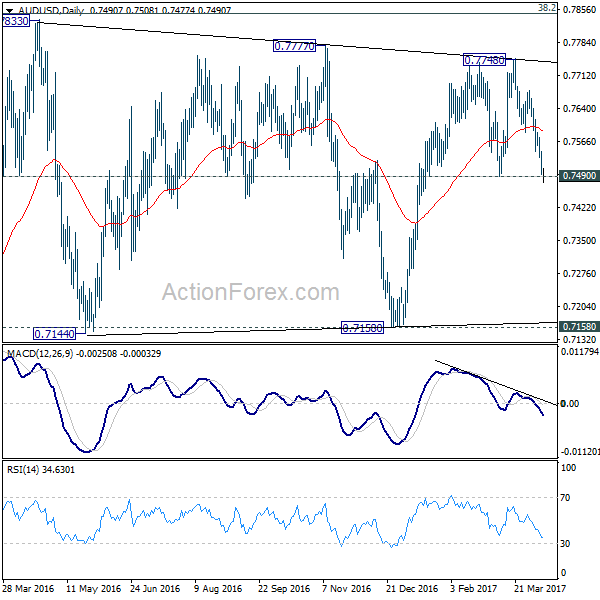