The post CPI selloff in Dollar was relatively shallow and the greenback is regaining some footing today. Similar Sterling stays week after post BoE selling, but loss is so far limited. On the other hand, Canadian Dollar remains the strongest one for the week and stays firm ahead of today’s employment data release. In other markets, WTI crude oil reached as high as 71.89 overnight and stays firm at around 71.25 at the time of writing. US equity indices ended broadly higher with DOW 8- 0.8% to 24739.53. Nikkei followed and rose 1.16% to 22758.48. Gold edged higher yesterday but struggled to stay above 1320.

US House Speaker Ryan urged NAFTA agreement notification by May 17

US House Speaker Paul Ryan told the NAFTA negotiation parties that May 17 is the deadline for the new NAFTA deal for eventual passage for the current Congress to vote on within this year. Ryan said “We have to have the paper – not just an agreement, we have to have the paper – from USTR by May 17 for us to vote on it this year, in December, in the lame duck”. But later, his spokesman said he referred to a notification of intent to sign the NAFTA agreement, not the full text. The new elected Congress will take office in January.

Canadian Foreign Minister Chrystia Freeland said after meeting with US legislators that “we are definitely getting closer to the final objective.” Mexico’s Economy Minister Ildefonso Guajardo said he’ll know by the end of Friday ” if we really have what it takes to be able to land these things in the short run.”

BoJ Kuroda: Some steps remaining for government on fiscal reforms

BoJ Governor Haruhiko Kuroda spoke to the parliament today and hailed that the government has made significant progress on fiscal reforms. And, there is “some lag before the steps already taken begin to affect the economy”. But he also emphasized that there are “still some steps remaining that the government needs to take on structural reform and growth strategy.”

New Zealand BusinessNZ Performance of Manufacturing Index rose to 58.9 in April, up from 53.1. That’s also the highest level since January 2016. BusinessNZ’s executive director for manufacturing Catherine Beard noted that “although April represents a good result for the sector, the key will be to continue the expansion momentum over the coming months.”

Canadian job data will be the main focus for today. US will release import price index and U of Michigan consumer sentiment.

GBP/USD dipped to 1.3459 as recent decline resumed. But downside momentum is a bit week. Nonetheless, intraday bias is back on the downside. Firm break of 1.3448 fibonacci level will pave the way to next fibonacci level at 1.2874. On the upside, break of 1.3617 will indicate short term bottoming. In that case, bias will be turned to the upside for stronger rebound, possibly back to 55 day EMA (now at 1.3869). 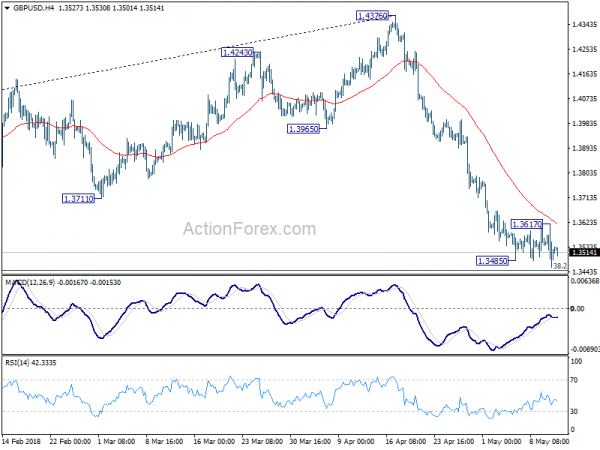 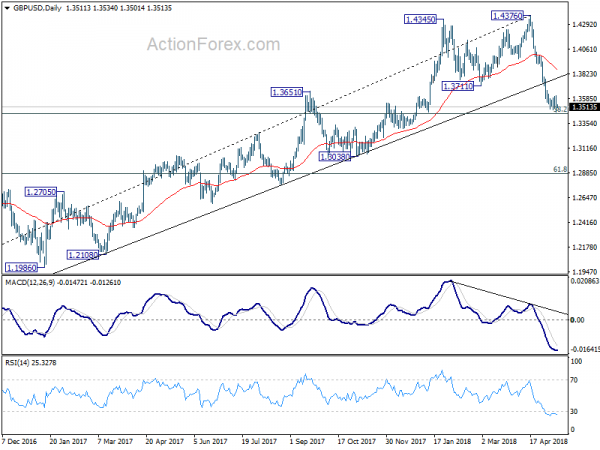