Politics are the main drivers in the forex markets today. Euro tumbles broadly on concern of the populist policies of the coalition government in Italy. EUR/USD finally took out 1.1822 support decisively But the more important development could be in EUR/CHF which dives through 1.8 handle. Dollar actually doesn’t perform very well today as it’s the third weakest one. Safe haven flows helped pushed treasury yields lower. 10 year yield hit seven year high at 3.094 yesterday but it’s now back at around 3.06. The renewed uncertainties regarding North Korea, as well as Italy worries are the triggers.

According to a 39-page draft obtained by Huffington Post Italia, the anti-establishment 5 Star Movement and far-right League are planning to ask ECB to forgive EUR 250B of Italian debt. Further than that, they would seek to renegotiate Italy’s contribution to EU budget. And, the populist duo would also push for new Eurozone rule to allow member states to leave. It’s generally expected that the final version of the policies will be watered down. But the sense of concerns is there in the markets, regarding the possibilities of chaos created by a government run by these two political outsiders.

German Merkel: You can talk better if you remain in the Iran deal

Merkel admitted that the agreement “is everything other than ideal”. But she acknowledged that “Iran is, according to all the knowledge of the international nuclear authorities, sticking to the commitments of the agreement.”

China’s ambassador to WTO, Zhang Xiangchen said that “the US is blocking selection of new Appellate Body members, taking restrictive trade measures under Section 232 and threatening to impose tariff measures of US$50 billion of goods imports from China under Section 301 of US domestic law.” And, he warned “any one of these, if left untreated, will fatally undermine the functioning of the WTO.”

The US was reported to have requested China to cut its trade surplus with it by USD 200b by 2020. Zhang criticized that “such practices clearly violate the non-discrimination principle of the GATT, therefore have long been abandoned” by the WTO.

And he pointed out the contradiction in what the US is trying to do. He said “the US is blaming the Chinese Government for state intervention on the one hand, while pressing China, by way of issuing government orders, to increase imports, restrict exports, and reduce excess capacity on the other hand.” Also, “governments can make efforts to promote trade, but cannot force companies to do business by pointing gun at their heads.”

North Korea threatened to cancel Trump-Kim summit after they’re infuriated by comments from Trump’s national security adviser John Bolton that North Korea could follow a Libyan model of nuclear disarmament. The meeting is scheduled to be on June 12.

North Korea’s vice-foreign minister Kim Kye-gwan used strong words in a statement carried by the state news agency KCNA. He condemned that Bolton’s suggestion was “not an expression of intention to address the issue through dialogue”. And, “it is essentially a manifestation of awfully sinister move to impose on our dignified state the destiny of Libya or Iraq which had been collapsed due to yielding the whole of their countries to big powers.”

Kim went further and warned that if the US “corners us and unilaterally demands we give up nuclear weapons we will no longer have an interest in talks and will have to reconsider whether we will accept the upcoming DPRK-US summit”. And, “if President Trump follows in the footsteps of his predecessors, he will be recorded as more tragic and unsuccessful president than his predecessors, far from his initial ambition to make unprecedented success.”

But it’s generally believed that the contraction is temporary. In particular, a relatively weaker Yen at 100 against Dollar and global recovery, export led Japanese economy remains on solid footing for expansion.

Also from Japan, industrial production was revised up to 1.4% mom in March, from first estimate of 1.2% mom.

EUR/CHF drops sharply to as low as 1.1777 so far today and breaks 38.2% retracement of 1.1445 to 1.2004 at 1.1790. Based on current momentum, deeper decline would likely be seen. Intraday bias stays on the downside for 61.8% retracement at 1.1659 and below. On the upside, break of 1.1864 support turned resistance is needed to indicate short term bottoming. Otherwise, near term outlook will be mildly bearish even in case of recovery.

In the bigger picture, current development suggests solid rejection by prior SNB imposed floor at 1.2000. Considering bearish divergence condition in daily MACD, 1.2004 could be a medium term top. And price action from 1.2004 is corrective the up trend from 1.0629. Hence, for now, deeper fall could be seen back to 1.1445, which is close to 38.2% retracement of 1.0629 to 1.2004 at 1.1479. We’d expect strong support from there to bring rebound to extend the medium term corrective pattern. 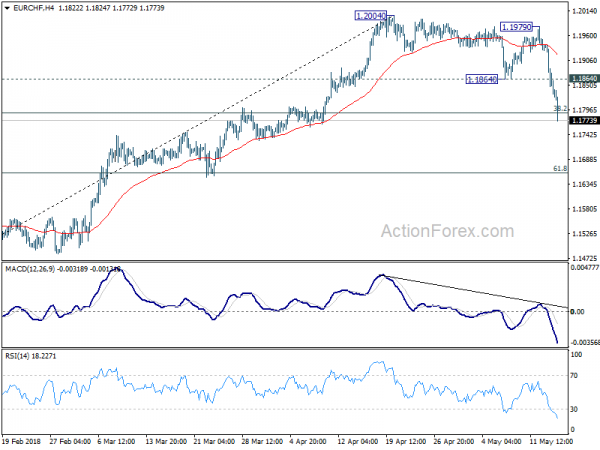 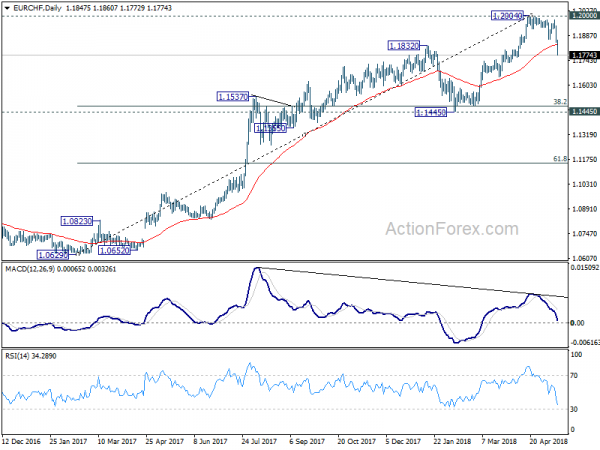