Dollar surged broadly last week as Fed policymakers finally made up their mind on hiking a total of four times this year, as reflected in the new projections. The greenback was also helped by ECB monetary policy decision, with traders disappointed on the rate path. The headlines were then dominated by trade war toward the end of the week, as the US abandoned negotiation and fired another shot towards China. But judging from the reactions in the currency as well as stock markets, investors were not too bothered by this US triggered trade war yet.

While Euro was sold of steeply after ECB, it wasn’t the worst performing one of last week. Canadian Dollar was the biggest loser on concerns over trade tensions with the US. Adding to that oil price dived ahead of this week’s OPEC+ meeting. Australia Dollar followed as the second weakest as RBA is no where near a rate hike. And, while Australia escaped the steel and aluminum tariffs, its economy will most likely be hurt by US protectionist trade policy indirectly through the trade war with China.

There will be more central bank activities this week, just ahead of half-year end. SNB and BoE are unlikely to give any surprise. RBA minutes will also continue to sing the same old tune.

US triggered second round of trade war, China responded

On Friday, the US Trade Representative formally announced the section 301 tariffs on Chinese imports, targeting products related to the Made in China 2025 policy. There are two set of tariffs lines. The first set contains 818 lines of the original 1,333 lines announced in April. This set covers around USD 34B of Chinese imports. 25% tariffs will be imposed starting July 6, 2018. The second set contained 284 proposed tariff lines, covering around USD 16B in Chinese goods. This set will undergo further public view before finalizing.

Altogether they’re valued around USD 50B. and focuses on products from industrial sectors that contribute to or benefit from the “Made in China 2025” industrial policy, which include industries such as aerospace, information and communications technology, robotics, industrial machinery, new materials, and automobiles. The list does not include goods commonly purchased by American consumers such as cellular telephones or televisions.

Soon after, China announced the retaliation measures, targeting USD 50B of US products. The first set of productions include soybean, agricultural products, automobiles. These products are valued at around USD 34B, will be subjected to 25% tariffs, starting July 6, 2018. China would also impose 25% tariffs on other products, valued at around USD 16B, including  chemicals, medical equipment, and energy products. Effective date is to be determined. China condemned US actions as violating rules of the WTO and threatens China’s economic interests and security.

DOW’s late rebound could be based on false hope

DOW initially tumbled to as low as 24894.38 on Friday, breaking 25000 handle. But it staged a strong rebound later in the session to close at 25090.48, just down -84.83 pts or -0.34%. Technically, the development kept near term rebound from 23344.52 intact. And more upside is in favor in near term. But the structure of the rebound and the weak upside momentum is in line with the view that it’s a corrective move. That is, upside should be limited by 25800.35/26616.71 resistance zone. Another decline is expected as the third leg of the consolidation pattern from 26616.71 before it completes.

Fundamentally, Friday’s movements could be based on the believes that US and China will go back to the negotiation table at some point. And there will eventually be a deal. But we’d like to point out that Trump’s recent actions have clearly showed there is no intention of negotiation at all. Recalling the result of the Kim-Trump summit, Trump decided to stop military exercises with South Korea, for negotiation in good faith with North Korean leader Kim. But he “pointed a gun” to EU and Canada with steel tariffs for trade negotiations. He left the G7 summit early and overturned the statement at his allies’ back. And in the end, nothing was achieved with the activated tariffs. It’s the same with China as Trump clearly showed the master of deals is not going to the negotiation table. Hence, beware of a steeper selloff in stocks as investors finally realize this truth.

Fed is now ready for two more hikes this year

The FOMC announcement last week was more hawkish than generally expected. Federal funds rate was raised by 25bps to 1.75-2.00% as expected. In the new economic projections, the most important part is that federal funds rate is projected to be at 2.4% by the end of 2018, revised up from 2.1%. That is, Fed is now leaning towards total of four rate hikes this year. 2018 GDP forecast was raised to 2.8%, up from 2.7% in March projections. 2019 and 2020 GDP projections were unchanged at 2.4% and 2.0% respectively.

Dollar initial hesitated after Fed’s announcements. But bulls quickly jumped in following less hawkish than expected ECB decisions. Dollar index jumped to as high as 95.15 last week. The break of 95.02 indicates resumption of rebound form 88.25. But we’d prefer to see sustained break of 95.15 key resistance to confirm. Also, that should be accompanied by a decisive break of 1.1509 in EUR/USD, which it’s still holding on to. Nonetheless, for the near term, outlook will stay bullish as long as 93.19 support holds.

ECB announcement, on the other hand, disappointed Euro traders. The central bank did make that “judgement call” regarding quantitative easing. It decided to taper the EUR30B per month asset purchase program after expiring in September, to EUR 15B per month, subject to incoming data. The program will then run till the end of December 2018 and end there.

However, in the forward guidance, it’s also mentioned that interest rates will be held at “present levels at least through the summer of 2019 and in any case for as long as necessary to ensure that the evolution of inflation remains aligned with the current expectations of a sustained adjustment path”. Currently, the main refi rate, the marginal lending rate and the deposit rate at 0%, 0.25% and -0.40% respectively. Euro was sold off steeply as traders were unhappy with the rate path.

Stocks loved that though

Canadian Dollar suffered most last week on a couple of factors. Recent batch of weaker than expected data could keep BoC on the sideline for longer than expected. In additional to that, Trump and his aides’ hostility towards Prime Minister Justin Trudeau and Canada in general suggested that the trade tensions will only escalate. Steel and aluminium tariffs are already there. The so called national security automobile tariffs are coming. And, there is no light in the ever dragging NAFTA negotiations.

Adding to that oil prices tumbled just ahead of an important meeting of OPEC, Russia and other producers in Vienna this week. It’s speculated that OPEC could reach an agreement to moderately raise production over the coming months. Or, There could be a scenario that Saudi Arabia and Russia will shoulder the added productions. But one way or the other, oil production will likely be increased, but in a controlled way so as not to spike the markets. 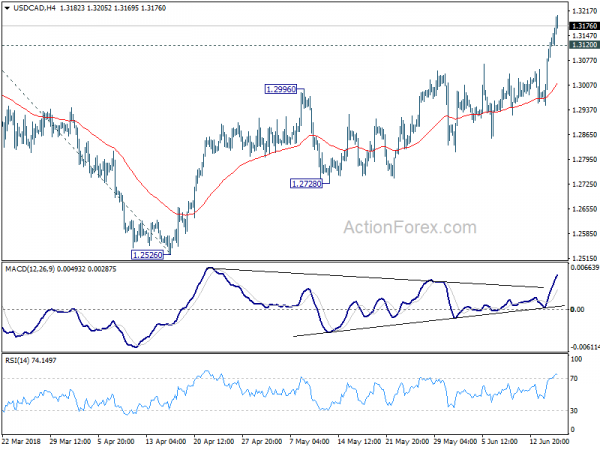 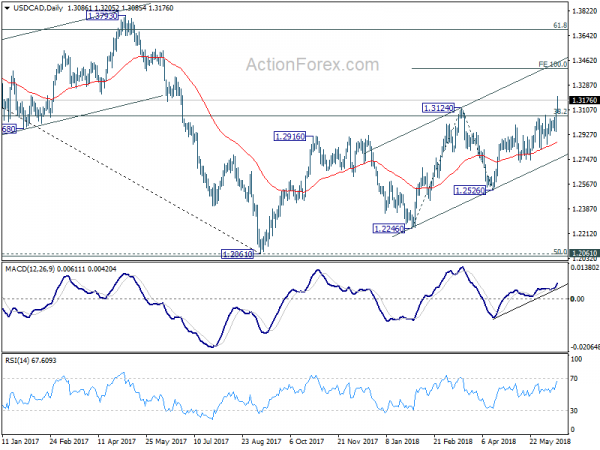 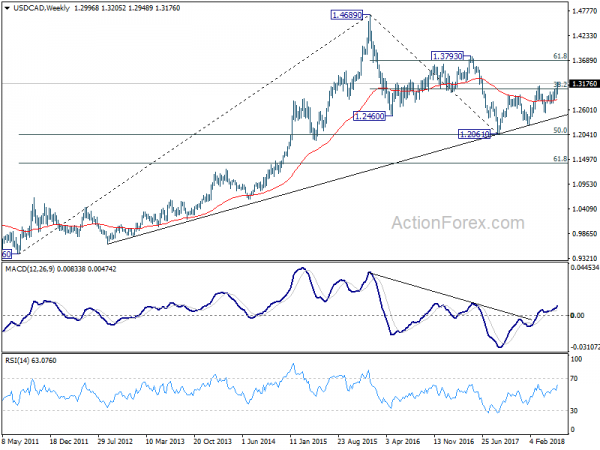 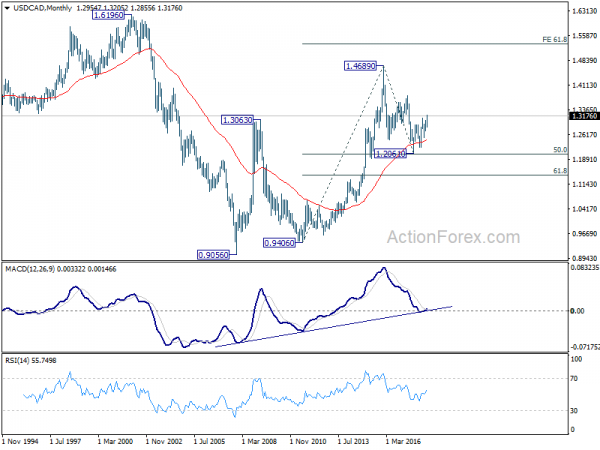