Geopolitical tensions somewhat took a back seat last week. The headlines were filled by news of UK snap election, French election, and to a lesser extent US tax reform. Sterling ended the week as the strongest major currency after boosted by the news of snap election and prospect of a "softer" Brexit. Euro survived the terrorist attack in Paris and French election uncertainties to end as the second strongest one. Dollar ended the week mixed as markets seemed not too convinced by news of Trump administration’s tax reform. Meanwhile, Canadian Dollar ended as the weakest one as dragged down by WTI crude oil’s sharp fall and break of 50 handle. The result of French election on Sunday will be the first market mover this week.

The first round of French presidential election on Sunday prompted some risk averse sentiments in the markets. In particular, investors are getting more cautious after the terrorist attack in Paris. German bund yields tumbled to close the week at 0.19%, lowest level for the year. At this point, centrist Emmanuel Macron and far-right Marine Le Pen are still expected to come out of Sunday as the winner for the run-off on May 7. Anti-euro Le Pen seemed to have gotten a jump in support after the Paris attack. But that didn’t change the base line scenario of a Macron-Le Pen run off with Macron as winner in that case. It was indeed, the strong momentum of another anti-euro candidate far-left Jean-Luc Melenchon that worried the markets most. A Melenchon-Le Pen run off will drastically raise the voice of Frexit in France and would give the Euro much pressure. Judging from the actions in CAC 40, markets are not too worried about it yet.

CAC 40 dipped to as low as 4980.81 last week but that was mainly following the sharp fall in FTSE. CAC 40 then drew strong support from 55 day EMA and 38.2% retracement of 4733.81 to 5142.81 and rebounded. The news of Paris attack didn’t trouble the index much. It’s staying in up trend despite loss of upside momentum as seen in daily MACD. For now, outlook of the index remains bullish for another rise through 5142.81 at a later stage.

The world was shocked by UK Prime Minister Theresa May’s u-turn and call for a snap election last week. The notion was then approved by the parliament with overwhelming 522 to 13 votes. FTSE 100 suffered the worst day since Brexit referendum and tumbled sharply after the news. On the other hand, Sterling soared and ended the week as the strongest major currency. May’s Conservative is widely expected to win the election in June as the party is having over 20% margin of support over its strongest rivals. Some analysts noted that a win in the election will give May the mandate to pursue her "own" Brexit strategy. And that would mean a softer and more patient approach, in avoidance of "hard Brexit". Markets’ repricing of the scenarios for Sterling has sent FTSE sharply lower due to profit projections on exchange rate.

But negative for FTSE

The sharp decline in FTSE clearly indicated topping at 7447.00. This is supported by the strong break of 55 day EMA as well as bearish divergence condition in daily MACD. We also see the rise from 5499.50 as ended and thus expect medium term pull back to 38.2% retracement of 5499.50 to 7447.00 at 6703.05. At this point, we’re staying bearish in GBP/USD for medium term. But upside acceleration in GBP/USD, accompanied by downside acceleration in FTSE, could prompt us to change the medium term outlook of GBP/USD.

US stocks, yields and Dollar attempted to rebound last week on news regarding US President Donald Trump’s tax reforms. But the developments argue that these markets have merely stabilized rather than reversed. After some comments by Treasury Secretary Steven Mnuchin, the White House finally said on Friday that Trump will release "broad principles and priorities" of the tax overhaul on the coming Wednesday. Trump also said that "the process has begun long ago but it really formally begins on Wednesday." However, it’s also reported that the announcement will only contain broad principles and no details. Meanwhile, it’s also reported that this round of reform will only be temporary because the so called border-adjusted tax will be excluded. Based on the current reactions, markets will need something more concrete before committing to a rebound.

10 year yield dipped to as low as 2.177 but recovered since then. There is no change in the near term bearish outlook as long as 2.391 resistance holds. And TNX’s correction from 2.615 would extend to as 38.2% retracement of 1.336 to 2.621 at 2.130. Based on oversold condition as seen in daily chart, strong support should be seen at around 2.13 to bring a rebound. But still, break of 2.391 resistance is needed to indicate completion of the correction. Or, more downside would be seen ahead.

Regarding trading strategy, out EUR/USD short (entered at 1.0580) was stopped out at 1.0680 last week, losing -100 pips. We’ll wait for markets reaction to French election before putting on a position.

GBP/JPY formed a short term bottom at 135.58 last week, just ahead of 135.39 medium term fibonacci level. The development argues that whole consolidation pattern from 148.42 has completed. But we’d prefer to see decisive break of 140.08 resistance to confirm. At this point, we’re favoring the bullish case and expect further upside in GBP/JPY ahead. 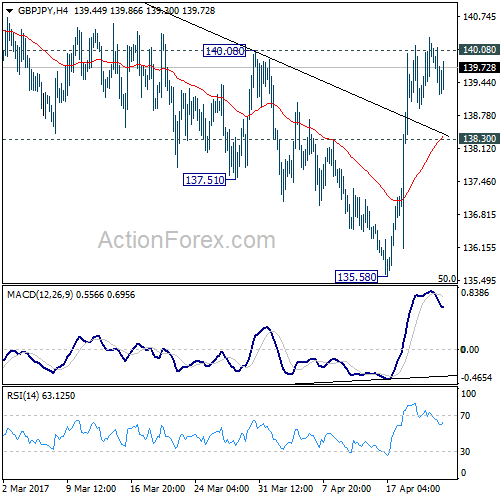 Initial bias in GBP/JPY is neutral this week for some consolidations. But as long as 138.30 minor support holds, further rally is expected. Decisive break of 140.08 resistance should affirm our bullish view and target 144.77 resistance next. However, break of 138.30 will turn focus back to 135.58 low instead. 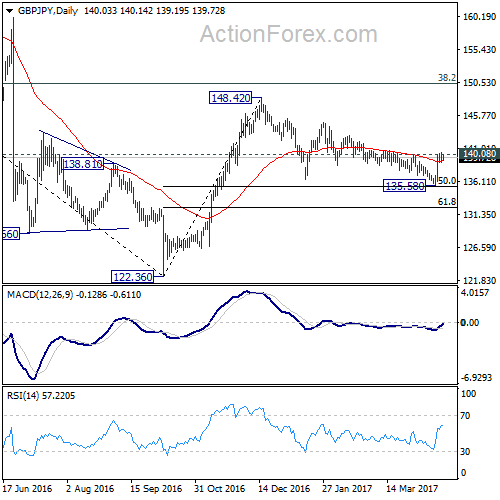 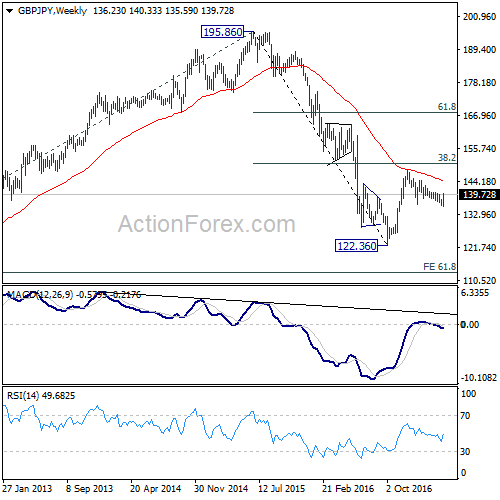 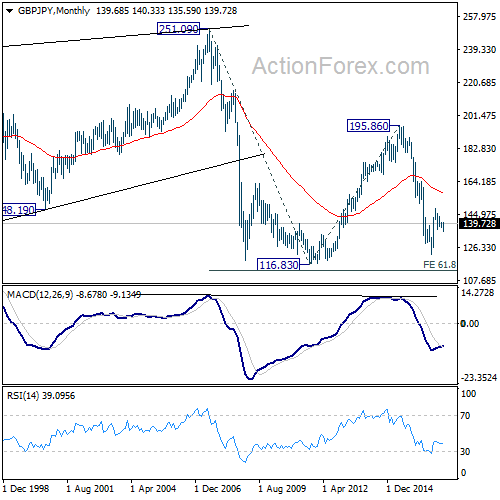