Sterling was overwhelming the weakest one last week on Brexit political drama in the UK. It’s now even uncertain for how long Prime Minister Theresa would stay in position, not to mention if there would be an agreement for orderly Brexit. Dollar followed as the second weakest after cautious comments from Fed officials prompted traders to pare back bets on Fed’s rate path. Canadian Dollar was the third weakest as oil price’s free fall continued.

Euro was mixed only, thanks to other happenings overshadowing Italy-EU budget clash. New Zealand and Australian Dollar were the strongest ones, lifted by their own data. Also, prospect of de-escalation of US-China trade war also helped.

Looking ahead, the economic calendar is relatively light this week, in particular with US on Thanksgiving holiday. RBA and ECB minutes will catch some attentions. Also Eurozone PMIs and Canada CPI and retail sales will be watched. The main focuses will remain on UK politics, Italy budget, US-China trade talks and fedspeaks.

Traders have started to pare back bets on Fed’s rate hikes quite notably. Some high profile Fed officials expressed their concerns of global slowdown and that impact on the US. In the background, both Japan and German recorded GDP contraction in Q3. Then Fed Chair Powell named current global slowdown as a headwind for the US ahead.

More Fed officials jumped in later, in particular, Trump’s newly appointed Fed Vice Chair Richard Clarida. He pointed out that global slowing is going to be relevant to the outlook of US with impacts through trade and capital markets, etc. Dallas Fed Robert Kaplan said global growth is going to be a little bit of headwind that may spill over to the US.

For now, raising interest rates to neutral is still the consensus among Fed policymakers. But where the neutral rate lies is up for debate to a certain extent. Some like Philadelphia Fed Patrick Harker even said he’s not convinced with a December hike. Minneapolis Fed President Neel Kashkari also said he didn’t see any need for more rate hikes.

Another point that Powell brought out last week was that Fed will have a press conference at every meeting starting 2019. And that means every meeting is live. This arrangement comes at the very correct timing as Fed can calibrate their rate path with much more flexibility next year.

Staying with the US, China sent a document with listing out 142 items regarding Trump’s requests on trade and market access. That’s generally seen as a positive step towards a “framework” deal at the Trump-Xi meeting during the Nov 30-Dec 1 G20 summit. But there are also concerns regarding the non-negotiable items on the list, as well as China’s commitment to its own words.

Trump’s responses were, nevertheless, rather upbeat. He hailed on Friday that ” it’s a very complete list. I think it’s 142 items, and that’s a lot of items.” He added “there are four or give big things left off” and “it’s just not acceptable to me yet”. But he also said “I think we’ll probably get them too”. Regarding imposition of additional tariffs on USD 267B of Chinese goods, Trump said “we may not have to do that. China would like to make a deal.”

Dollar index risks medium term reversal, but not yet there

Both developments on Fed expectations and de-escalation in US-China trade war were Dollar negative. Dollar index edged higher to 97.69 last week then turned south to close at 96.46. It’s too early to call for a reversal as the index is staying inside near term rising channel, above rising 55 day EMA. But risk is increasing considering that it’s close to 61.8% retracement of 103.82 to 88.25 at 97.87, a key fibonacci resistance. Break of 95.67 support will be an important sign of medium term topping and should bring deeper fall back to 93.81 support and below.

Sterling was sold off steeply on political turmoil in the UK. In short, Prime Minister Theresa May appeared to have secured Cabinet support for her Brexit agreement with EU. European Council also decided to hold an unscheduled meeting on November 25 to approve the agreement. However, just around half a day later, four ministers resigned in protest to the Brexit agreement, including Brexit Minister Dominic Raab.

Then Brexiteer leader Jacob Rees-Mogg led a campaign to oust May with no-confidence vote request. Right now, over 20 other MPs have already submitted their requests. It seems very likely for them to meet the requirement of 48 and a leadership challenge could happen as soon as on the coming Tuesday.

So far, it’s quite uncertain if May could get 158 or more MPs to support her in case of the no-confidence vote. And even if she could survive this, it rather doubtful if she can be the Brexit agreement through the Commons. The Pound will remain vulnerable in the week ahead.

Euro somewhat survived as Brexit overshadowed Italy’s budget clash. In Italy’s resubmitted draft budget plan to the European Commission, budget deficit target was held unchanged at 2.4% of GDP in 2019. Among that, Italy planned to raise its structural deficit by 0.8% of GDP. This is clearly a violation of EU’s demand to cut by -0.6%. GDP growth forecasts was held unchanged at 1.5% for the same year. That was widely seen as overly optimistic.

Now, European Commission is expected make decision on what to do with Italy, possibly on the coming Wednesday. It’s believed that the commission will start the first step to discipline Italy, which is called “Excessive Deficit Procedure”. The EU Economic and Financial Committee will then have two weeks to review the Commission’s report. Then, the Commission could move to formally launched the EDP, which can results in fines.

GBP/JPY’s sharp decline last week suggests rejection by 149.70 resistance. Initial bias remains on the downside this week for 142.76 support first. Sustained break there will bring retest of 139.39/47 key support zone. On the upside, above 145.59 support turned resistance could bring stronger rebound. But near tem outlook will be neutral at best as long as 149.70 key resistance holds. 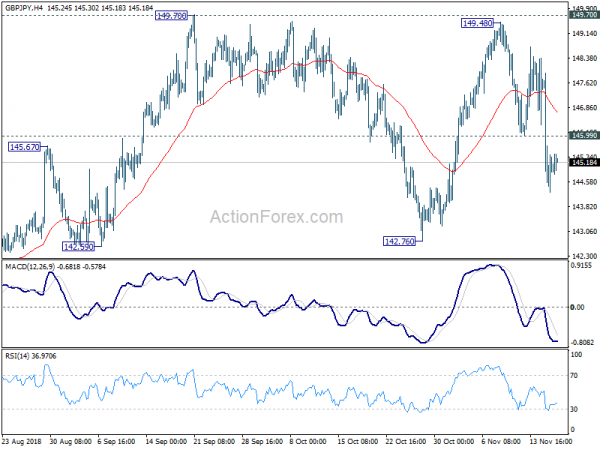 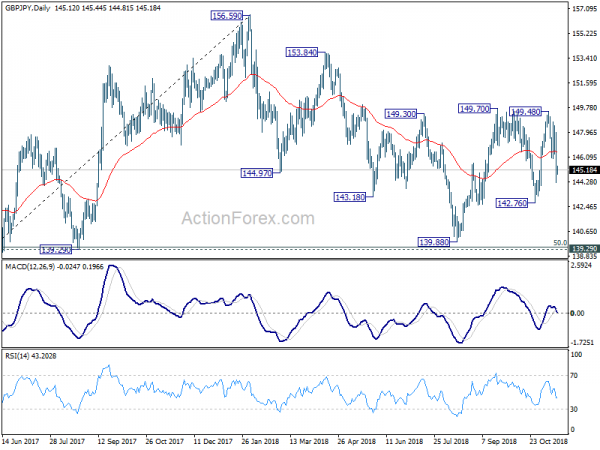 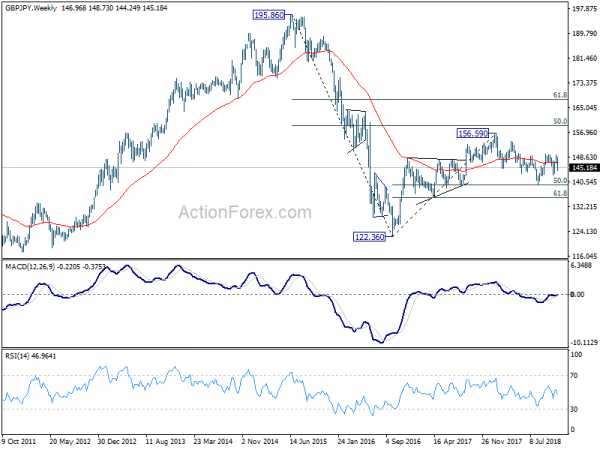 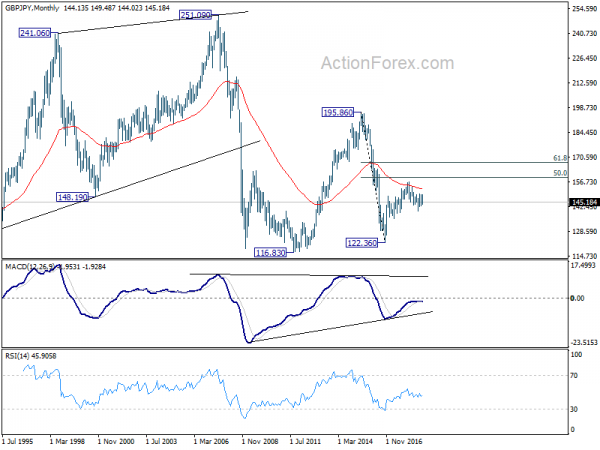