There were big roller coaster rides in the financial markets last week. Apple’s sales outlook downgrade heightened the concerns over serious slowdown in the Chinese economy. There was the “Currency Flash Crash” which sent through all key technical resistance levels while Australian Dollar tumbled to multi-year low. The partial US government shut down is entering its third week, without any breakthrough.

But looking through all the volatility and one-off events, there are a few developments to note. Firstly, China stepped up the pledge to support the economy with easing measures immediately announced. More are expected to come this year which might cushion any deterioration in sentiments. Secondly, Fed chair Jerome Powell turned rather cautious in his comments which prompted some re-think of the rate path ahead. Thirdly, stakes are getting high on US-China trade talks, which are to resume at vice ministerial level this week.

In the currency markets, after all the volatile moves, Yen was only the second strongest one for the week. Canadian Dollar occupied the top spot, thanks to rebound in oil prices and as markets prepare for BoC rate decision. Australian Dollar was the third strongest after recovery from the torture of the flash crash. Euro was the worst performing one, followed by Swiss Franc and then Dollar.

Investors expect Fed to stand pat in first half, may cut rate by December

Fed Chair Jerome Powell’s comments on Friday were at least more cautious than before, if not dovish. In short, he pledged that Fed was “listening” to the markets after December’s volatility. And, “particularly with the muted inflation readings that we’ve seen coming in, we will be patient as we watch to see how the economy evolves.” He also added that “we are always prepared to shift the stance of policy and to shift it significantly” if needed.

So, basically, traders are not expecting any rate hike by Fed in 2019 at all. What’s more important is that, CME futures are pricing in 3% chance of a cut in March and June, but over 25% chance of a cut to 2.00-2.25% in December. That is, for now, the consensus is Fed will do nothing in the first half. And chance of rate cut towards the end of the year increases, depending the developments. To us, such pricing is a bit too pessimistic on the economy, in particular after the strong NFP report.

While US stocks tumbled broadly after Apple’s sales outlook downgrade, sentiments staged a massive turnaround on Friday, with help from Powell. However, we’d like to point out that the post-Christmas rebound is still viewed as a corrective move, and all three major indices are held below key near term fibonacci levels. Such rebound might not sustain for long.

Yield curve inversion, a indication of recession ahead, is clearly something that’s troubling investors. The situation was rather serious when 10 year yield dived to as low as around 2.54 and 1-year yield reached 2.50. It looked like 1- and 10-year yields were going to invert. But the situation eased much after Friday’s rebound.

The Dollar index very much reflected EUR/USD’s movements. That is, it’s staying in familiar range. DXY drew support from 95.67 and recovered after last week’s decline attempt. But there was no momentum for an upside breakout. The development is starting to turn bearish with 55 day EMA taken out briefly. But still, break of 95.67 support is needed to confirm near term reversal. On the upside, 61.8% retracement of 103.82 (2017 high) to 88.25 (2018 low) at 97.87 remains a difficult hurdle to overcome. Near term outlook is overall neutral for now.

Overall market sentiments have started to turn around on Friday on news that China was ready for measures to support the economy. The State Council noted in a brief statement in its website that Premier Li Keqiang pledged to step up “countercyclical adjustments” of macro policies. Measures will include tax cuts, targeted lowering of reserve requirements to help small and private companies.

And a few hours later, the People’s Bank of China announced to lower the reserve requirement ratios (RRR) by 100 basis points to “support the development of the real economy, optimize the liquidity structure, and reduce financing costs”. The RRR will be lowered by 0.5% on January 15 and another 0.5% on January 25. Currently, the RRR stands at 1.4% for large banks and 12.5% for smaller banks.

In addition, China’s Ministry of Commerce confirmed that there will be US-China vice ministerial level trade talks in Beijing on Jan 7-8. There will be “positive and constructive discussions” in following up to the agreement of Xi and Trump in Argentina. Deputy U.S. Trade Representative Jeffrey Gerrish will lead the team on the US side. This was seen by many as positive developments on US-China trade talk and gave another lift to sentiments.

The news gave Chinese stocks a lift while helped other markets globally. After breaching 2449.19 low to 2440.90, the Shanghai SSE composite quietly rebound to close higher at 2514.86 on Friday. Last week’s high at 2532.00 is the first hurdle to confirm short term bottoming. We’d expect this to be done rather quickly this week. And there is prospect of rising further to 55 day EMA (now at 2594.56). The real hurdle is double bottom neck line at 2703.51. For now, we’d expect strong resistance from there to limit upside to bring down trend resumption. We don’t expect investors to be convinced that the Chinese government could save the slowdown that easily.

Canadian Dollar ended the week as the strongest one partly thanks to the rebound in oil prices. Also, traders lighten up their short positions ahead of BoC rate decision this week. For now, its seems most analysts lean towards the case of holding rate unchanged at 1.75%. But this is not a total consensus. BoC turned cautious last week as it warned that “the persistence of the oil price shock, the evolution of business investment, and the Bank’s assessment of the economy’s capacity will also factor importantly into our decisions about the future stance of monetary policy”. But overall it still maintained that the policy rate would “need to rise into a neutral range to achieve the inflation target”.

Talking about oil prices, WTI extended the rebound from 42.05 short term bottom to as high as 49.33/ Considering bullish convergence condition in daily MACD, 42.05 will likely provide a solid base for the short term at least. The question is how far the rebound could go. For now, we’re not seeing any strong momentum to warrant a trend reversal yet. Thus, upside should be limited by 54.61 resistance, which is close to 38.2% retracement of 77.06 to 42.05 at 55.42). That should have set the range for a medium term sideway pattern. 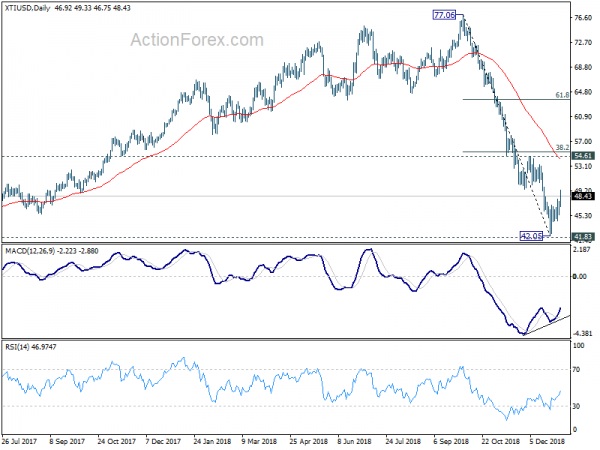 The outcome of BoC’s meeting could very much depend on how they view the rebound in oil prices. If they do see it as a correction, there is certainly room to stand pat and be cautious. That’s another story if they see 42 as the bottom already. The overall BoC meeting will be a rather live one, together with new economic projections too.

We’ve closed our EUR/JPY short as last updated in this update. So we’re not going to repeat here.

In considering the strategy for this week, we’d firstly avoid Sterling. Brexit debate is going to resume in the UK parliament this week, with a vote tentatively scheduled for next week. So far, we haven’t seen any real progress yet but there could be a turnaround any time. It’s just too hard to predict what’s next.

Secondly, we’d avoid Aussie and Yen for now after last week’s flash crash. Both look exhausted recent moves. AUD/USD has bottomed in near term after breaching 2016 low of 0.6826. But current rebound doesn’t warrant bullish reversal yet. Similarly, EUR/AUD topped out in near term after breaching 2015 high at 1.6587. But the deep pull back doesn’t suggest medium term bearish reversal yet too. Yen crosses are still bearish in general after last week’s rebound. But USD/JPY, EUR/JPY and GBP/JPY’s recovery could extend higher.

Thirdly, we’d also like to avoid Canadian Dollar for now. Current rebound in oil price is seen as corrective. And, if the sharp falls in USD/CAD and EUR/CAD are considered corrective, they’re both run away already. BoC meeting is a little of a wild card that we don’t prefer to bet on.

That leaves us with only Dollar, Euro and Swiss Franc. Dollar is in favor if 10-year yield rebound further away from the above mentioned key support zone. Positive development from US-China trade talk might also help. Additionally, there is prospect that investor might realize they’re being too pessimistic in pricing Fed’s rate path. After all, Friday’s NFP was a rather strong one.

EUR/CHF is close to key support level at 1.1173 with diminishing downside momentum as seen in 4 hour MACD. And there is prospect of a strong sustainable rebound. Thus, Swiss Franc is preferred to Euro for selling. 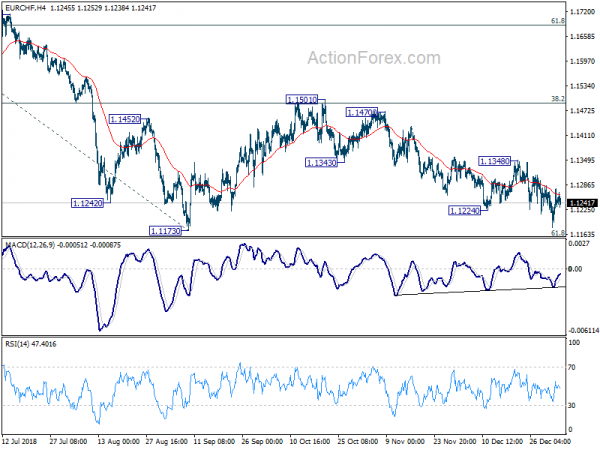 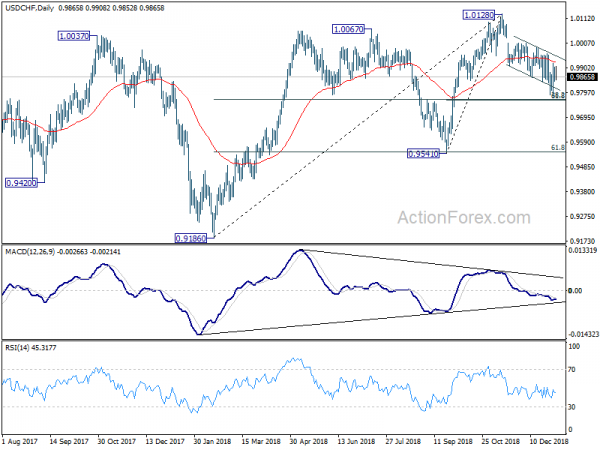 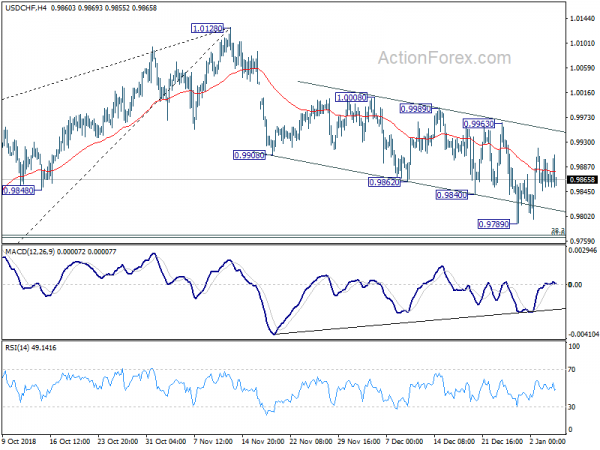 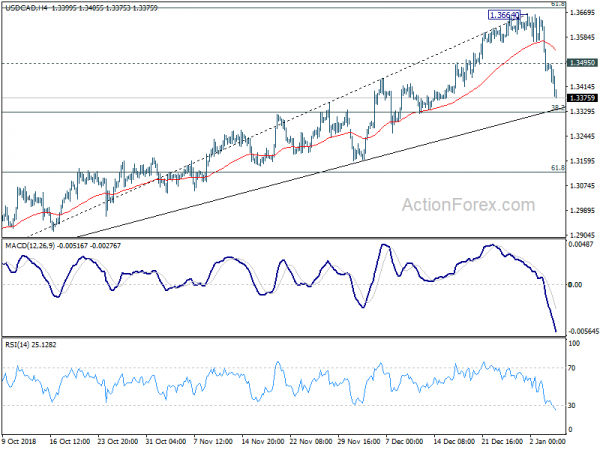 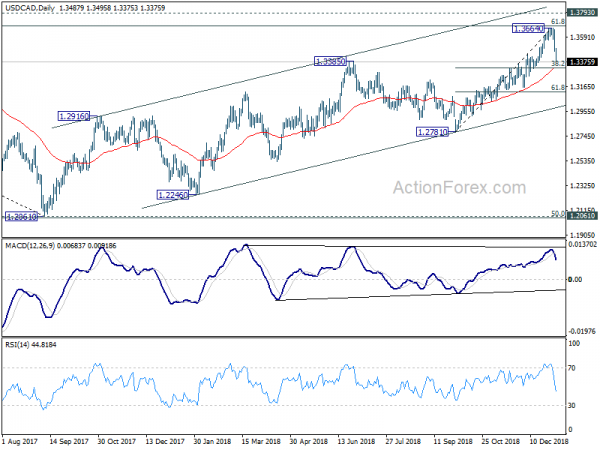 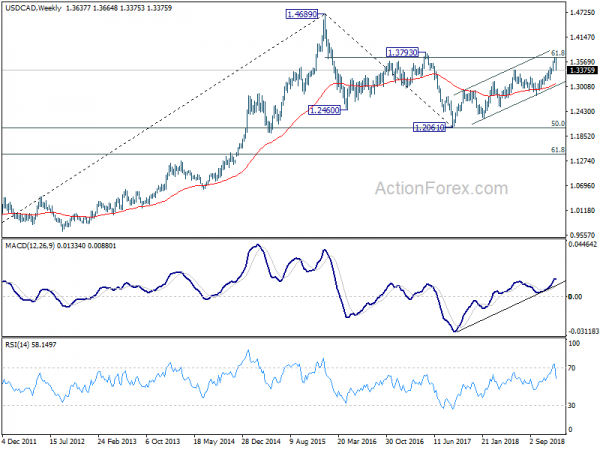 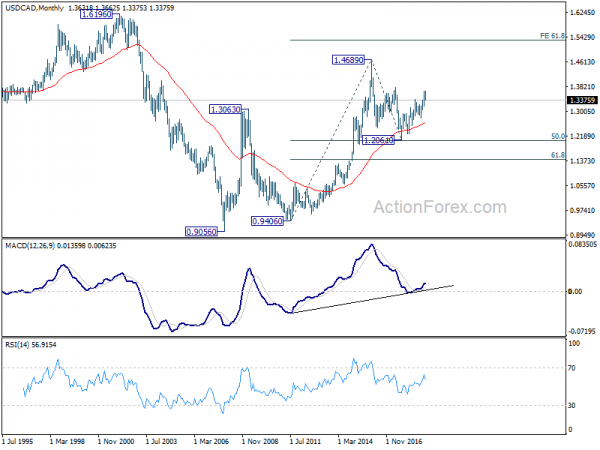