Action Forex
HomeMarket OverviewWeekly ReportWith No Clarity on Brexit and Trade War Yet, Focus Will Turn...

With No Clarity on Brexit and Trade War Yet, Focus Will Turn to FOMC Projections

Sterling ended last week as the strongest one as no-deal Brexit is now politically ruled out. But it should be noted that the path forward remains unclear, as least for a few more days. Thus, the upside breakout of Sterling was indecisive. The Pound has indeed closed below recent highs against Dollar and Yen. On the other hand, Euro ended as the second strongest while Yen was the weakest, followed by Dollar. Overall, as the key issues in Brexit and US-China trade negotiations are unresolved, traders hesitated to commit to a firm direction.

Three central banks will meet this week, including Fed, SNB and BoE. All are expected to keep monetary policies unchanged. SNB and BoE are unlikely to provide any fresh inspirations to the market. Fed’s new economic projections, however, will finally tell us, in terms of numbers rather than words, what made Fed change to a “patient” stance this year. RBA minutes will also be scrutinized. However, while more economists are now predicting two rate cuts this year, the central could refrain from giving any hints of rate cuts until May meeting.

No clarity on Brexit yet after a string of parliamentary votes

The UK House of Commons voted 391-242 on Tuesday to reject Prime Minister Theresa May’s Brexit deal, for the second time. That came despite last minute concessions from the EU that provided a way for UK to exit the Irish backstop unilaterally on one very special occasion. On Wednesday, the Commons passed a non-binding motion to “reject” no-deal Brexit under all circumstances, by 321 to 278 votes. On Thursday, the Commons voted 413 to 202 to seek Brexit delay. If a Brexit deal is approved by March 20, 2019, the extension sought will be three months until June 30. If no deal was approved, the length of the extension will depend on its purpose.

A core issue regarding the extension on the EU side is the European Parliament election on May 23-26. An EU document presented to ambassadors of member states noted that Brexit can’t be delayed beyond July 1 unless UK takes part in the election. It’s now expected that May will bring her twice-defeated Brexit deal back to the Commons for another meaningful vote on Tuesday March 19, just ahead of EU Council meeting on March 21-22. May is now using a tactic that if her deal isn’t approved, the UK would be trapped in the EU much longer than originally expected. But even so, it’s still highly unlikely for her deal to get through. The Parliament will have the chance to take over Brexit control on March 25. Clarity on the way forward might be possible only after that.

Another week has passed without any concrete news regarding the so called “substantial progress” in US-China trade negotiations. Trump said there will be news in three to four weeks, “one way or the other”. That’s consistent with the message that there will be no Trump-Xi summit at the Mar-a-Lago this month. There were talks that the deal could be sealed and signed in April. But later in the week, it’s reported that the meeting will be pushed further even to June, when both Presidents might meet in the G20 summit in Japan.

The prolonged negotiations could be a result of US Trade Representative Robert Lighthizer’s detail-oriented approach. It could also be because the deliverables of the negotiations are now trade agreements rather than memorandums of understandings. But in any case, it’s reported that Lighthizer is highly respected by the Chinese delegation for his professionalism and experience. And the Chinese government believed that working with Lighthizer is the right track to take.

Anyway, the US, Chinese and global economy will continue to endure the tariff “cannons” of the trade war for a while more. For now, no escalation is a positive. But there is no end in sight on the sufferings.

Fed to put words into numbers with new economic projections

The upcoming FOMC meeting and announce might be the only event that finally provides some clarity to the markets. Back in December, Fed projected the median longer run federal funds rate at 2.8%, or central tendency at 2.50-3.0%. And, the median projection of federal funds rate was 2.9% by the end of 2019, with range at 2.6-3.1%. Fed also maintained tightening bias.

But suddenly, there was a U-turn since the end of last year and Fed now adopts “patient” approach. According Fed chair Jerome Powell, interest rate is now at the lower end of neutral. Such comments are echoed by most Fed officials in their speeches and comments. But, theoretically, federal funds rate at 2.25-2.50% is better described at “just below” neutral of 2.50-3.0%, as Powell said before the December meeting.

So, the new economic projections to be released this week will hopefully turn policymakers’ words into numbers. That is, How patient are they expecting to be? And where is neutral rate now if federal funds are are at the lower end of neutral?

Currently, fed fund futures are pricing 0% chance of a rate hike within 2019.

10-year yield lost more ground last week to close at 2.593, below 2.6 handle. The current development suggests that a breach of December’s low at 2.554 is likely in near term. But we’d maintain that TNX is now very close to long term channel support at 2.550. It’s also close to 38.2% retracement of 1.336 to 3.248 at 2.517. So, we’d expect limited downside potential, and near term bullish reversal should be due. That is, while near term weakness in yield could drag down Dollar, the rebound should take dollar through key resistance levels. Nevertheless, it will be another story if 2.5 handle in TNX is firmly taken out, which confirms medium term bearish reversal. 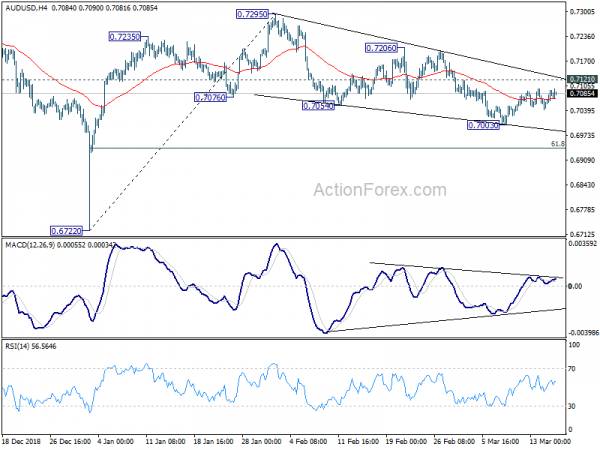 EUR/GBP dropped to 0.8474 last week but turned sideway since then. Initial bias is neutral this week for some more consolidation first. As long as 0.8676 resistance holds, further decline is expected. Firm break of 0.8474 will resume larger down trend to 0.8416 long term projection next. However, on the upside, decisive break of 0.8676 will indicate short term reversal and bring further rise to 0.8840 resistance. 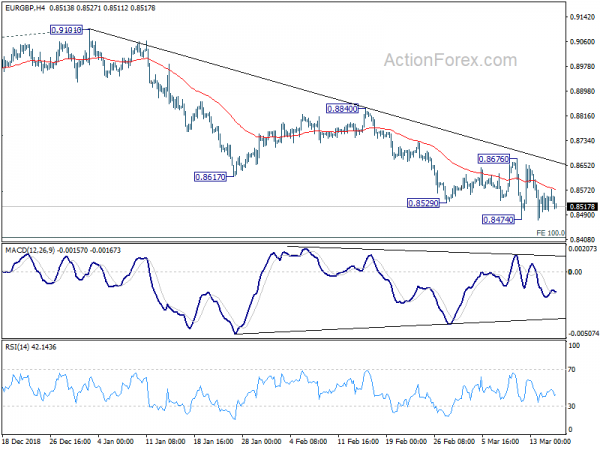 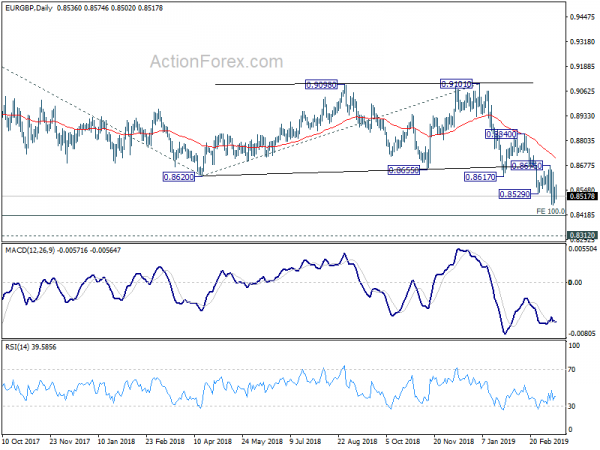 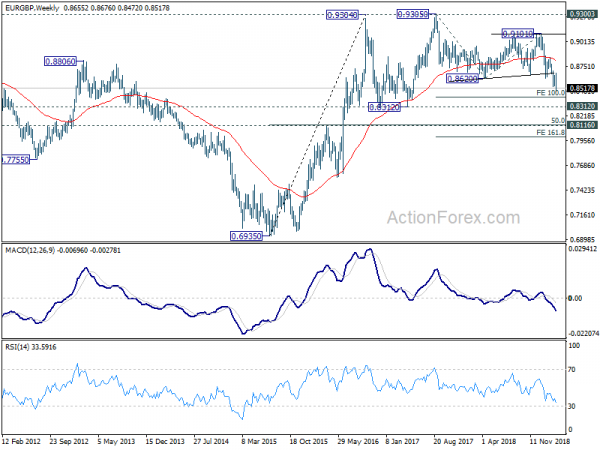 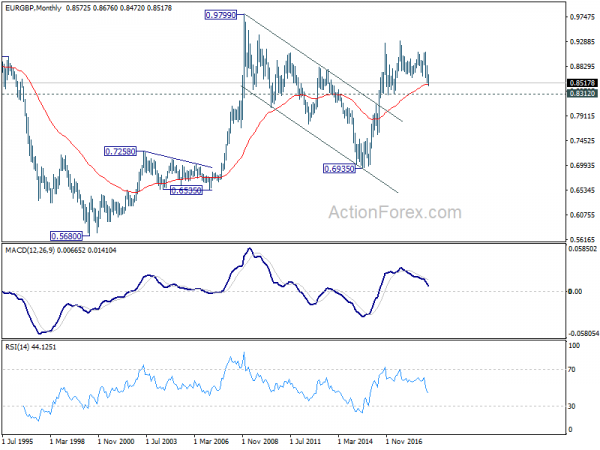