After the much more dovish than expected Fed economic projections and shockingly poor Eurozone manufacturing data, it looks like major world economies are at the brink recessions. German 10-year bund yield turned negative for the first time since 2016, and it was as high as 0.12 during the week. US yield curve between 3-month and 10-year is now inverted, with 10-year yield in free fall. While the market reactions might be exaggerated, sentiments are undoubtedly very fragile at the moment.

In the currency markets, Yen and Swiss Franc ended as the strongest ones of falling global yield and risk aversion. That’s not much a surprise. On the other hand, Canadian Dollar was the weakest ones, partly because WTI crude oil failed to sustain above 60 and retreated. But more importantly, it was argued that Canadian economy is facing more intense-than-expected moderation in the economy. If US would be in recession, Canada will only be worse. Sterling was the second weakest while Euro was the third. Despite very dovish Fed, Dollar ended the week mixed only.

Let’s have a recap some of the key events last week first.

Fed left federal funds rate unchanged at 2.25-2.50% as widely expected. The statement offered no surprise at the committee will remain “patient” regarding future adjustments to interest rates. Fed also decided to terminate the balance sheet reduction plan in September this year.

The shocks came from the all-round, deeply dovish economic projections. According to median projections, there will be no more rate hike in this year. Indeed, within the forecast horizon, there is at most one hike to 2.6%, by end of 2021, which would be lower than longer run rate at 2.8%. GDP forecasts for 2019 and 2020 are revised down. Unemployment rate for 2019, 2020, and 2021 are all revised up. Core PCE inflation projections were left unchanged. Overall the projections suggested that Fed is rather worried about growth outlook.

Talking about growth outlook, a key risk is prolonged trade tensions and tariffs. US Trade Representative Robert Lighthizer and Treasury Secretary Steven Mnuchin will visit China on March 28-29 to resume high level trade talks. Chinese Vice Premier is expected to travel to Washington in early April. Ahead of that, there were reports that China is pushing back against US demands on intellectual property protection as well as other major issues. While such reports were unconfirmed, they’re still consistent with the fact that there has been basically no leaked information on the core issues, including IP theft, forced technology transfer, subsidies on state-owned enterprises, and enforcement of the agreement.

On the other hand, Trump openly said that he’s considering to leave tariffs on Chinese products there for a “substantial period of time” even if a deal is agreed. Trump got his point that China “had a lot of problems living by certain deals.” Also keeping the tariffs there could force China to deliver what were agreed. However, without US stopping the punitive tariffs, China will certainly not agree to correcting its unfair trade practice while lifting its own retaliatory tariffs at the same time. The US won’t have it all. That is, even if there is an eventual agreement and China will speed up it’s reforms, tariffs from both sides will stay there for much longer.

And as we pointed out before, tariffs are the “cannons” of trade war and they are bombing both economies everyday right now. Believe it or not, other world economies, including Germany and Japan, who were on brink of recessions, have been dragged down by slowdown in global trade growth. US-China tariffs on each other are hurting the world too and will continue to do so for a long period of time, even if there is finally a deal, as Trump indicated.

The impact of trade on Eurozone manufacturing sector is rather evident. Eurozone PMI manufacturing dropped to 47.6 in March, a 71-month low. Offset by resilience in services, PMI composite just dropped 0.6 to 51.3. Markit noted that the data pointed to just 0.2% growth in Q1. More worryingly, forward-looking indicators suggested that growth could be even weaker in Q2. A reversal in services could drag Eurozone into contraction.

Looking into the steam engines, both manufacturing and services in France were already in contraction. Germany PMI manufacturing even dived to 44.7, a 79-month low. Services in Germany was resilient but even so, PMI composite dropped to 51.5. It should be noted that Germany narrowly avoided recession with 0% growth in Q4. But risks didn’t dissipate since then. The poor set of PMI data serve German 10-year bund yield negative for the first time since 2016.

News on Brexit were relatively positive. At the European Council meeting in Brussels, EU approved a short Brexit extension. If no Brexit deal is approved by the House of commons in UK. the extension will be until April 12, when UK has to indicate a way forward. If a Brexit deal is approved, the extension will be until May 22. But the cliff edge was just delayed. UK still still have to make a decision between a deal, no deal, a long extension or revoking Article 50.

The above discussed developments all played a hand in the financial markets last week. The collective impacts have been rather negative.

Most accurate US recession indicator triggered for the first time since 2007.

One of the most important development was yield curve between 3-month and 10-year is now inverted, after steep decline in long yields. It happened for the first time since 2007. This part of the yield curve is seen as having strong predictive power of recessions. Indeed, San Francisco Fed had published a economic letter “Information in the Yield Curve about Future Recessions” detailing some research on the topic.

More importantly, the technical development in 10-year yield suggests that the worst is yet to come. TNX dropped sharply to close at 2.455 last week. Both long term channel support and 38.2% retracement of 1.336 to 3.248 were taken out decisively. TNX was also rejected below 55 week EMA before, adding to its bearishness. In the relative bullish case, fall from 3.248 is merely correcting the up trend from 1.336. But even so, the case is now open for deeper decline to 61.8% retracement at 2.066 which is close to 2.034 support and 2.0 psychological level.

With dovish Fed projections and rising risk of recession in the US, traders raised their bet on a Fed rate cut by the end of the year drastically. Fed fund futures now imply 57.9% chance of having one rate 25bps cut (or more) by December meeting to 2.00-2.25%. It was just around 30% a week ago and 11% a month ago.

Dollar index’s performance was not too back last week. Despite dipping to 95.74, it quickly recovered to close at 96.65. Overall outlook is unchanged. that consolidation pattern from 97.71 might extend. In case of another fall, we’d expect strong support from 94.09 (38.2% retracement of 88.25 to 97.17) to contain downside. Meanwhile. decisive break of 97.71/87 resistance zone will confirm resumption of whole rise from 88.25.

EUR/CHF dropped sharply to as low as 1.1212 last week. The strong break of 1.1310 support confirmed that rebound from 1.1181 has completed at 1.1444. Initial bias remains on the downside this week for retesting 1.1173 low, as well as 1.1154/98 key support zone. We’d look for strong support from there to bring rebound. But decisive break will carry larger bearish implication. On the upside, above 1.1298 minor resistance will turn bias back to the upside for rebound. 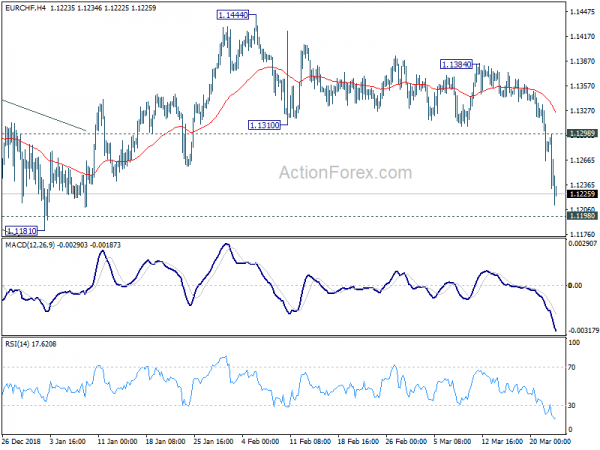 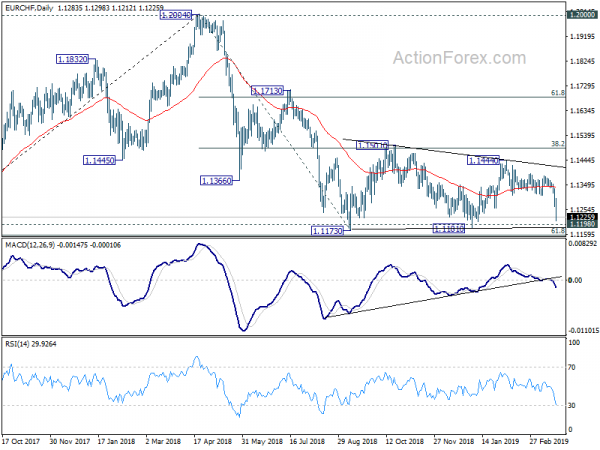 In the long term picture, the current development argues that long term up trend has completed at 1.2004 after rejection of 1.2 key resistance. Sustained break of 1.1198 support will confirm this bearish case and target 1.0629 and possibly below. 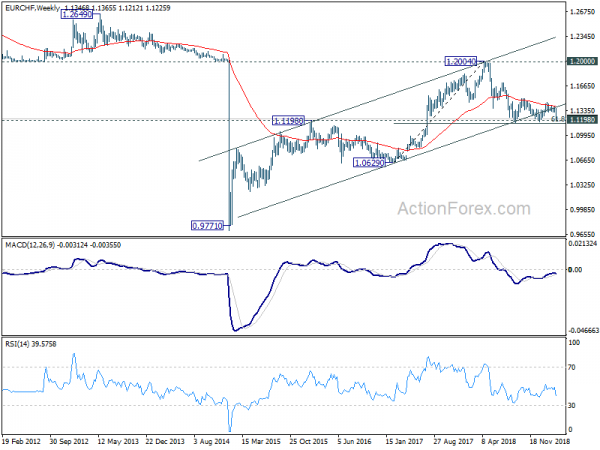 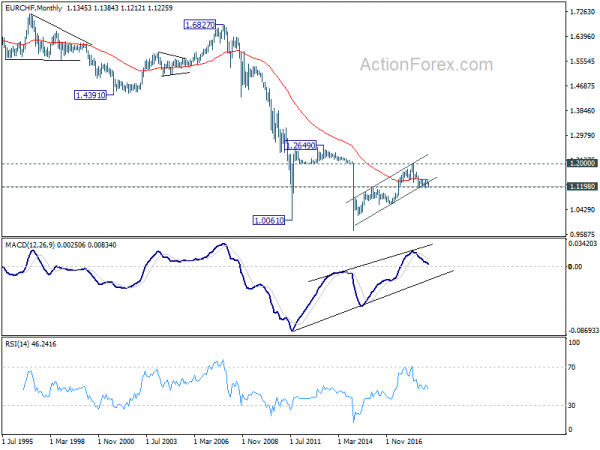