Staying in the currency markets, Sterling followed Dollar as the second weakest for the week, and then Canadian. New Zealand Dollar ended as the strongest one, followed by Swiss Franc and then Australian. Overall developments in the forex markets were rather mixed.

Though, technically, there are a couple of points to note. USD/CAD broke near term support at 1.3037 and resumed recent fall from 1.3564. The case for medium term bearish reversal in the pair is building up. AUD/USD’s strong rebound argues that recent rise from 0.6831 is still in progress and break of 0.7047 resistance would likely be seen very soon. Selloff in USD/JPY and USD/CHF also suggest that recent correct rebounds from 106.78 and 0.9695 have completed. Both pairs could retest recent lows soon. EUR/AUD’s fall from 1.6448 also looks set to resume as corrective recovery from 1.6025 has completed last week.

Powell sounded rather non-committal to any move in interest rates this month. And he pointed to upcoming economic data, including retail sales and GDP. These data would be taken into considering at the July 31 FOMC meting. But most importantly, he did nothing to talk down market’s full pricing of July rate cut. And that’s seen by traders as a nod to the highly anticipated rate cut.

He also mentioned that since June FOMC meeting, “uncertainties around trade tensions and concerns about the strength of the global economy continue to weigh on the U.S. economic outlook” and “inflation pressures remain muted”. It seems that to him, resumption of US-China trade negotiation and averting of tariffs on Mexico didn’t ease those uncertainties and concerns.

In the minutes of June FOMC meeting, it’s echoed that “uncertainties and risks regarding the global outlook appeared to be contributing to deterioration in risk sentiment in financial markets and a decline in business confidence that pointed to a weaker outlook for business investment”. Also, “many” of the voting members judged that “additional monetary policy accommodation would be warranted in the near term” if such developments “prove to be sustained” and “continue to weigh on the economic outlook”.

Combined together, the message is that the trigger for a cut could be continuation of uncertainties rather than actual deterioration in growth and inflation outlook. Such a bar for a move is rather low and based on this, the upcoming rate cut looks like a done deal. Nevertheless, we’d still argue that the picture could still change. US core CPI already reversed the trend in June and rose back to 2.1% yoy. There could also be some upside surprise in upcoming retail sales and GDP data. And again, according to June projections, only eight out of seventeen FOMC members penciled in rate cuts this year. Nine expected no change with one of the expected a hike. July FOMC rate decision is more live then people expect.

10-year yield recovered notably after making a short term bottom at 1.1943. But recovery is limited below 2.174 resistance, as well as falling 55 day EMA. Thus, outlook remains bearish and the down trend from 3.248 is expected to resume sooner or later, through 1.943 low. Nevertheless, break of2.174 will bring stronger rebound back to 2.356/614 resistance zone.

Dollar index’s rebound from 95.83 was limited below 97.76 resistance and dropped sharply. The development now argues that corrective pattern from 98.37 is not finished yet. And more medium term range trading could be seen. It’s rather hard to predict the path inside the pattern.

USD/CAD’s fall from 1.3564 resumed by breaking 1.3037 temporary low last week. Initial bias remains on the downside this week. Sustained trading below 1.3052/68 cluster support should confirm medium term reversal. Deeper decline should then be seen to 1.2781 support next. On the upside, break of 1.3143 resistance is needed to indicate short term bottoming. Otherwise, near term outlook will remain bearish in case of recovery. 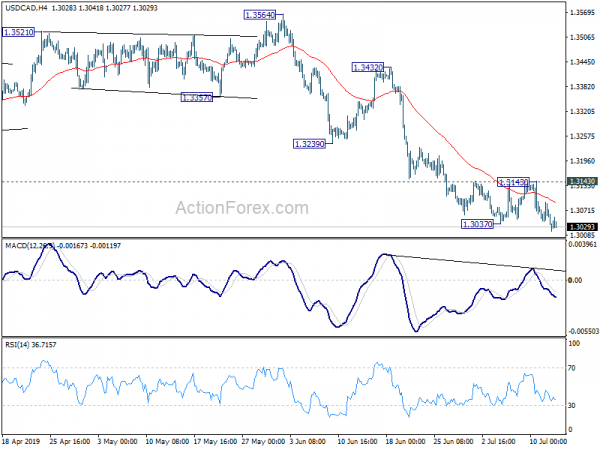 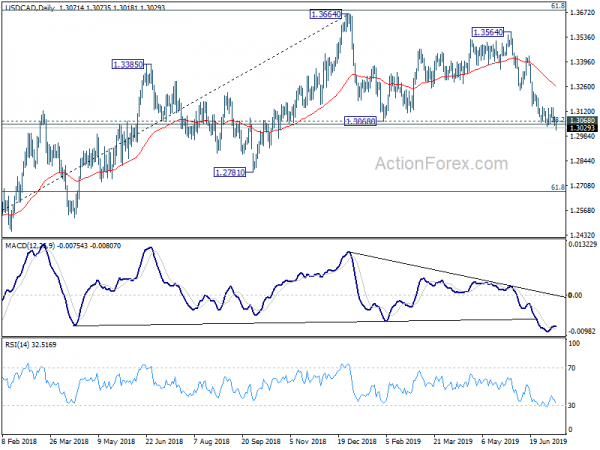 In the longer term picture, outlook remains unchanged that price actions from 1.4689 (2016 high) are forming a corrective pattern. Rejection by 1.3793 resistance would raise the chance of lengthier extension, with risk of dropping through 1.2061 low before completion. 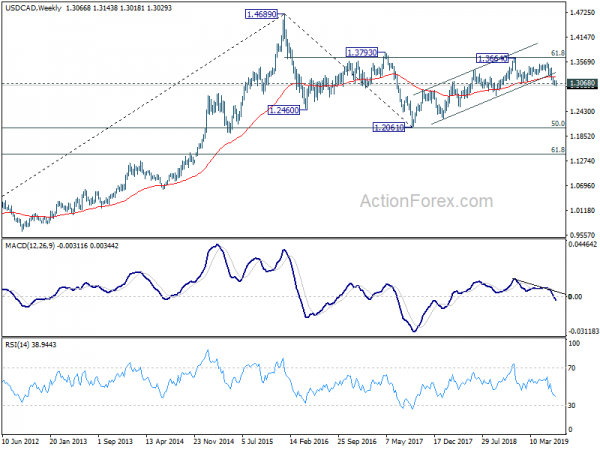 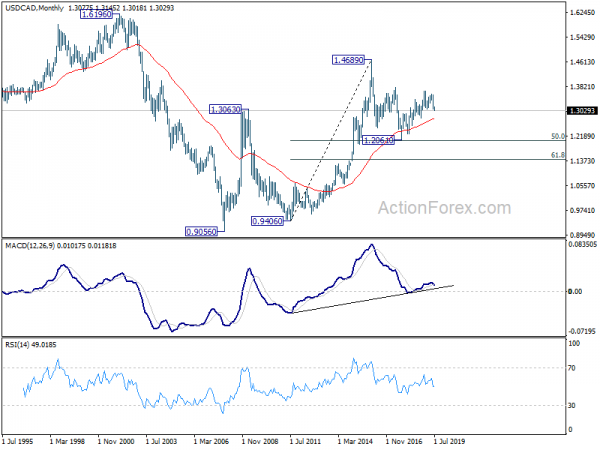 There’s a Lot More The Fed Can Do