The abrupt escalation of US-China trade war overshadowed Fed’s rate cut last week. As the trade talks in Shanghai yielded no constructive result, Trump announced to impose 10% on USD 300B in Chinese imports, effective September 1. The list include practically all untaxed Chinese goods, which should have much more direct hit to US consumers. China typically responded with hard-line comments, vowing to fight back with counter-measures. Additionally, trade tensions between Japan and South Korea also intensified, with both countries planning to take each other from the trade whitelist. That’s seen as a huge blow to the global tech supply chain.

Reactions in the bond markets to the developments were vigorous. Germany’s whole yield curve dropped below 0% for the first time ever, including 30-year (then closed at 0.0004). 10-year bund yield hit record low of -0.494 and closed there. US 10-year yield finally took out 2% handle with conviction, and closed at 1.855. In the currency markets, Yen and Swiss France rode on risk aversion and falling treasury yields to closed as the strongest. Dollar was the third strongest, somewhat helped by Fed Chair Jerome Powell. On the other hand, Sterling was the worst performing, on no-deal Brexit dear. Australian and New Zealand Dollar were the next weakest.

FOMC delivered the highly anticipated rate cut last week, lowering federal funds rate target to 2.00-2.25%. Fed Chair Jerome Powell tried to talk down the prospect of further easing. He described the rate cut as “mid-cycle adjustment” and further clarified he was “contrasting with the beginning of a lengthy cutting cycle”. However, re-escalation of US-China trade war prompted traders to add more bets to rate cuts. Indeed, fed fund futures are now pricing in 100% chance of another -25bps rate cut in September to 1.75-2.00%.

Conditions set for bearish reversal in US stocks, but confirmation needed

US stocks also dropped sharply last week on fear of trade war. It’s the same old story that conditions are there for a major reversal S&P 500 was close to 61.8% projection of 1810.10 to 2940.91 from 2346.58 at 3045.42. Bearish divergence condition is also seen in both weekly MACD and RSI. Yet, sustained break of 55 week EMA (now at 2811.82) is needed to be the first sign of medium term topping. Otherwise, outlook will stay bullish for extending the record run.

Yuan could be the next imminent big risk to global markets

The Chinese Yuan would be the next imminent big risk for the global financial markets. After yesterday’s strong rise, USD/CNH (offshore Yuan) is back pressing 6.9875 key resistance. Decisive break there this key level resume the long term up trend from 6.0153. Next medium term target will be 61.8% projection of 6.2359 to 6.9804 from 6.6704 at 7.1305. Such development would likely drag down China SSE, which should then likely spillover to other Asian markets at least.

GBP/JPY’s decline accelerated to as low as 129.07 last week. The break of 131.51 support confirmed resumption of whole decline form 156.69. Initial bias stays on the downside this week for 122.36 low as next target. We’d be cautious on bottoming around there. On the upside, above 131.61 minor resistance will turn intraday bias neutral and bring consolidations first. But recovery should be limited below 135.66 resistance to bring fall resumption. 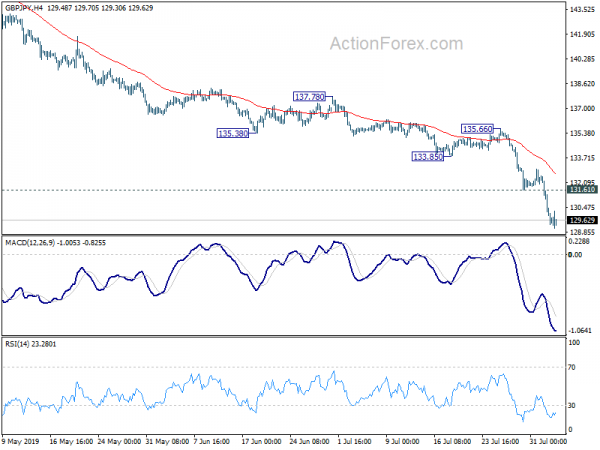 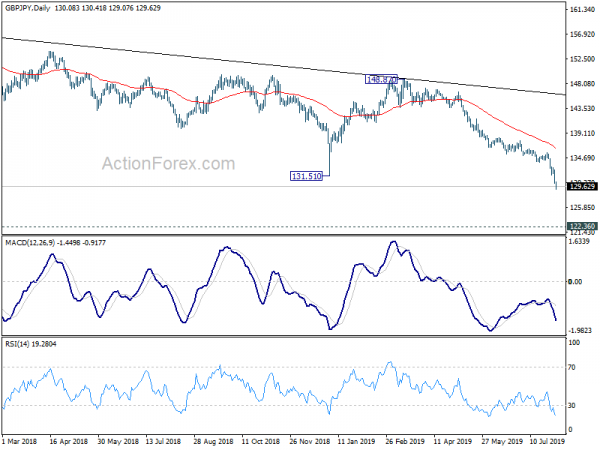 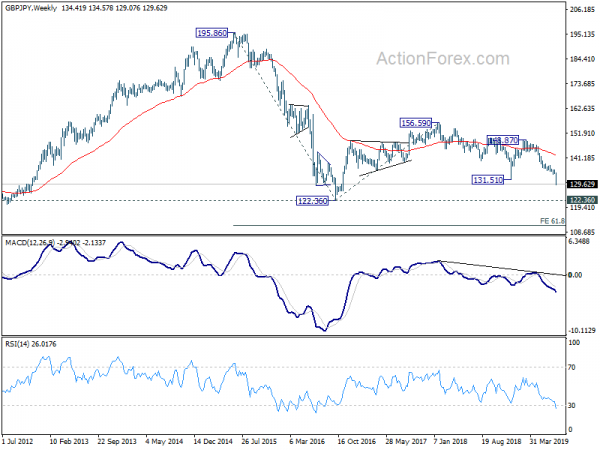 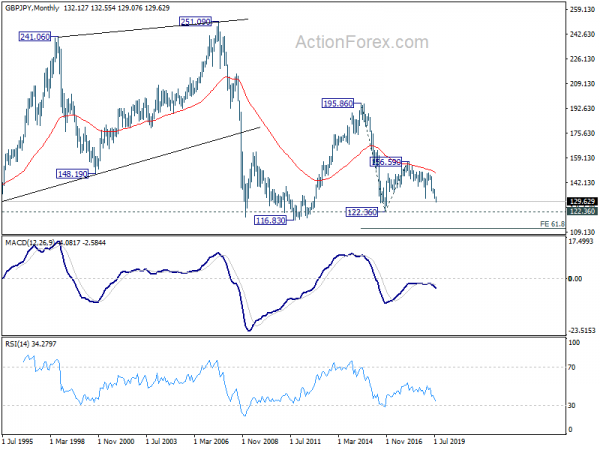