Weakness in Sterling and Euro was the main directions in the forex markets last week. Dollar tried to extend recent rally but ended mixed only. Upside of the greenback was limited by persistent trade uncertainties. While commodity currencies ended higher, they have just merely turned into consolidations and pared some recent losses.

A major question for the near term is whether EUR/USD’s selloff would extend after making new 2019 low last week. Also, EUR/GBP appeared to have bottomed for the near term. Stronger rebound in EUR/GBP could trigger deeper selloff in the Pound elsewhere, in particular against Dollar and Yen.

Dollar ended the week mixed with as political uncertainties grew, while the picture regarding trade were mixed. US President Donald Trump started to face formal impeachment inquiry regarding Ukraine. At the same time, he completed a first-phase trade deal with Japan, which includes beef, pork, wheat and cheese. The issues of auto tariffs are not resolved yet, and left for next round of negotiations, expected to start next April.

There were also lots of confusions regarding trade negotiations with China. Top level meeting are believed to be scheduled for October 10-11, days ahead of imposition of next round of tariff escalation on October 15. China has also confirmed new agricultural purchases as goodwill gesture.

On the other hand, there were reports of US considering to limit US investors’ portfolio flows into China. That’s a move seen as expanding trade war into capital war. Trump also sounded extra harsh on China at United Nations General Assembly. Some saw these moves as part of Trump’s negotiation tactic of maximum pressure. But in any case, tensions between the two largest economies in the world could be much tenser than they seem.

NASDAQ in third leg of consolidation from 8339.64

Dollar index staying in up trend, but lack committed buying

Dollar edged to new 2019 high against Euro but quickly lost momentum and retreated. Dollar index also rose notably but was limited below recent resistance at 99.37. While there is no clear, committed buying seen yet, outlook in Dollar index remains bullish, staying above 55 week EMA. Weekly MACD’s recent cross above signal line argues that it’s building upside momentum again. For now, we’d still expect further rally to 78.6% retracement of 88.26 to 103.82 at 100.49. That should be reflected in sustained selloff in EUR/USD at a later stage too.

Sterling ended as the weakest one for last week, reversing part of this month’s gains. No-deal Brexit on October 31 should likely be avoided, more likely a delay than with a deal. The UK government is said to be preparing a detailed proposal to break the Brexit deadlock to EU. The timing could be between a Conservative member meeting which ends on October 2, and definitely before EU summit on October 17-18. There is little detail on how the Irish backstop issue could be resolved.

Yet, even a no-deal Brexit is avoided, problems could drag on. The Pound was sold of on talks that BoE could move towards a rate cut in any case. Most importantly, even known hawk Michael Saunders said “it is quite plausible that the next move in Bank Rate would be down rather than up.” He noted that “even without a no-deal Brexit, a scenario of persistently high uncertainty is probably the most likely outcome”. And, “that would probably imply continued weakness in business confidence and investment, with softer job growth that drags on consumer spending”. “It might well be appropriate to maintain a highly accommodative monetary policy stance for an extended period and perhaps to loosen policy at some stage, especially if global growth remains disappointing.”

Saunders’ comments, together with selloff in Pound, sent FTSE sharply higher last week. The development now suggests that pull back from 7727.49 has completed at 7020.22 already. Further rise is mildly in favor as long as 7212.96 support holds, towards 7727.49 resistance next. A breach there cannot be ruled out. But even in that case, we’d expect strong resistance below 7903.5 high to limit upside, to extend medium term consolidations.

Euro was pressured as another round of poor PMIs raised the question that more monetary easing is still needed even latest round of stimulus pack by ECB. Eurozone PMI manufacturing dropped further to 45.6 in September, hitting the lowest level in 83 months. PMI services also reached an 8-month low of 52.0. PMI composite dropped to 75-month low of 50.4. German PMI manufacturing dropped to 123-month low of 41.4 and was simply awful. German PMI composite turned into contraction at 49.1, an 83-month. As IHS Markit Chief Business Economist put, “with survey data like these, pressure will grow on the ECB to add to its recent stimulus package.” 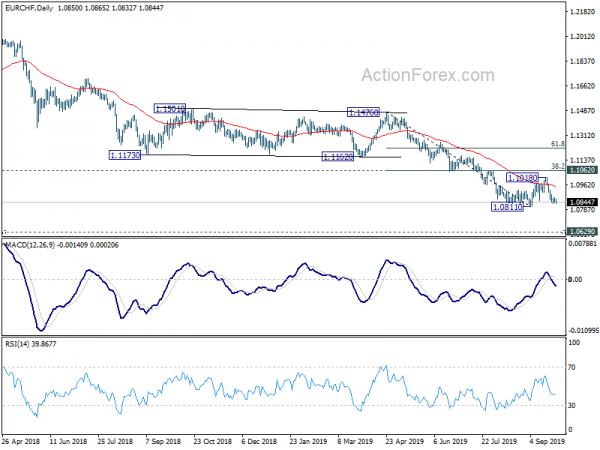 EUR/USD breached 1.0926 low to 1.0904 last week but quickly recovered. Initial bias is neutral this week first and some more consolidations could be seen. But upside of recovery should be limited below 1.1109 resistance. Medium term down trend from 1.2555 should be resuming. Break of 1.0904 will target 1.0813 fibonacci level next. 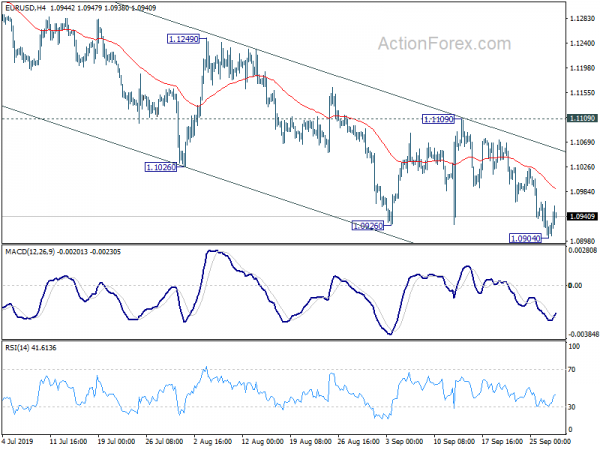 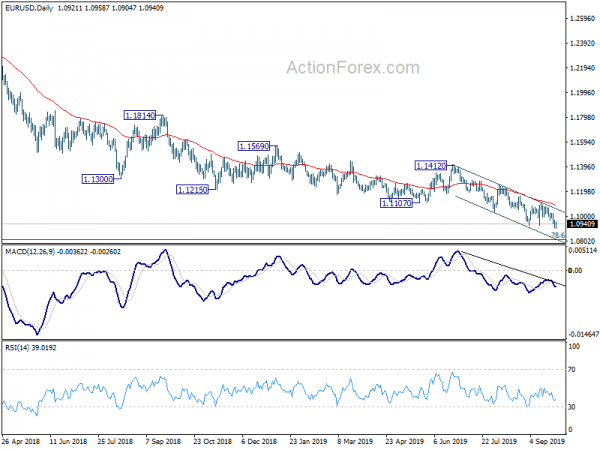 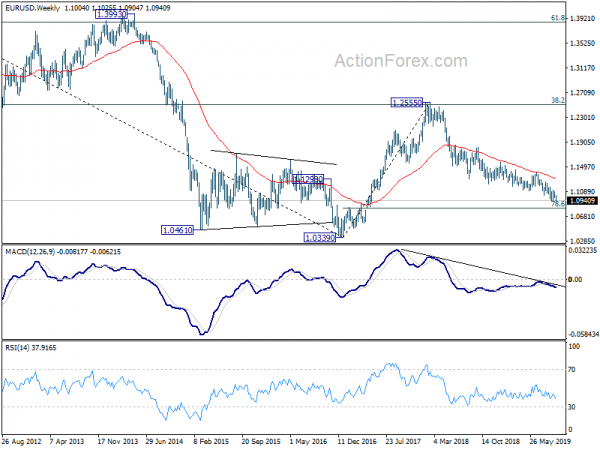 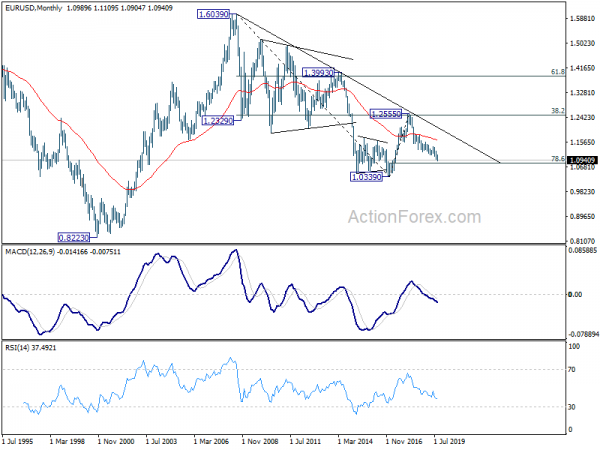