The financial markets were like in parallel universes last week. On the one hand, US stocks were boosted by trade optimism as the three major indices ended at record highs. On the other hand, Hong Kong stocks led Asian markets lower as unrest in the city continued, with no end in sight. Meanwhile, US bond traders seemed to be disagreeing to optimism in stocks, with 10-year yield closing notably lower. However, there was no “safe haven” nor “risk seeking” flow into the US markets as Dollar ended the week broadly lower.

In the currency markets, New Zealand Dollar was indeed the strongest after RBNZ’s surprised hold. Sterling was the second strongest as campaigns for December election are set to gather momentum. Australian Dollar was the worst performing one as job data put RBA on track for more policy easing next year. Dollar was the second weakest. AUD/NZD was surprisingly, but rightfully, the biggest mover last week. Dollar, bonds and stocks traders would need some more time to realign themselves. 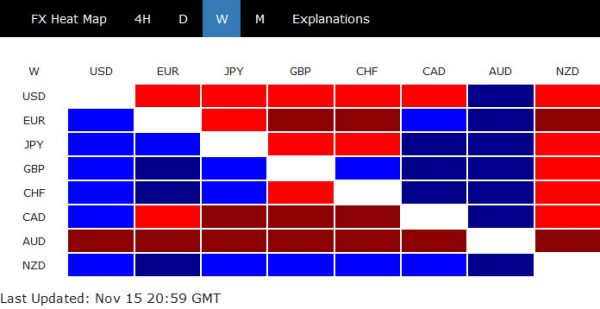 US stocks are boosted strongly by optimism over US-China trade deal phase one. All three major indices closed at new record highs. S&P 500 extended recent up trend and closed strongly at 3120.46 last week. The coming week(s) will be important as SPX would face long term channel resistance (now at around 3130). Some resistance could be seen from there to bring consolidation first. But in any case, outlook will stay bullish as long as 3027.98 resistance turned support holds. Meanwhile, sustained break of the channel will be strong sign of long term upside acceleration. Next target will be 100% projection of 1810.10 to 2940.91 from 2345.58 at 3477.39. However, firm break of 3027.98 will indicate topping and deeper fall back to 55 week EMA (now at 2887.58). 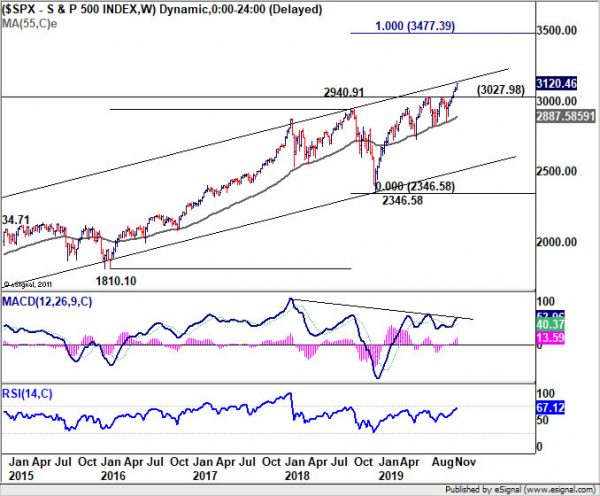 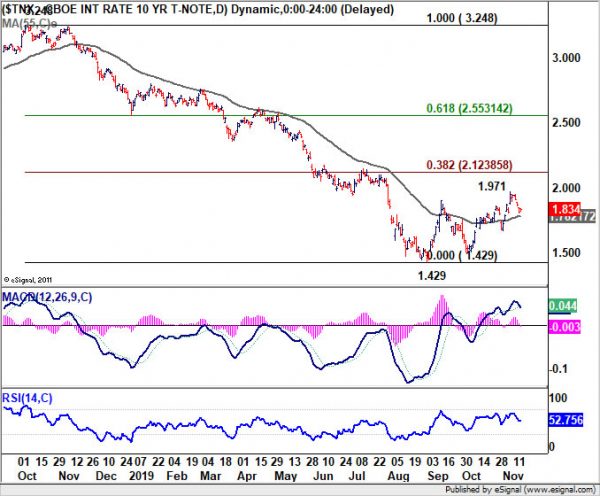 Dollar was somewhat dragged down by the decline in yields. Dollar index retreated after hitting 98.44, failed to sustain above 55 day EMA. For now, further rise will remain in favor as long as 97.82 minor support holds. Break of 98.4 will target 99.66 higher. Firm break there will resume larger up trend from 88.25 (2018 low). However, break of 97.82 will turn focus back to 97.71. Break there will be an important early sign of medium to long term bearish reversal.

AUD/NZD as a rare top mover on RBNZ/RBA divergence

It was a rather rare week to have AUD/NZD as the biggest mover, down -1.7%. Kiwi was boosted by RBNZ’s surprised hold. February meeting is live and there is no guarantee of a cut. Meanwhile, rise in unemployment rate and contraction in the job market put RBA on tract for another rate cut next year, probably in February. As RBA indicated, it’s already studying other measures to boost employment and inflation. So, QE is not impossible, following the next cut.

AUD/NZD’s rebound from 1.0263 should have completed at 1.0865. Further decline is in favor in the near term. More importantly, considering that price actions from 1.0107 low are rather corrective looking, current fall from 1.0865 could extend well into support zone of 1.0107/0263, before bottoming. 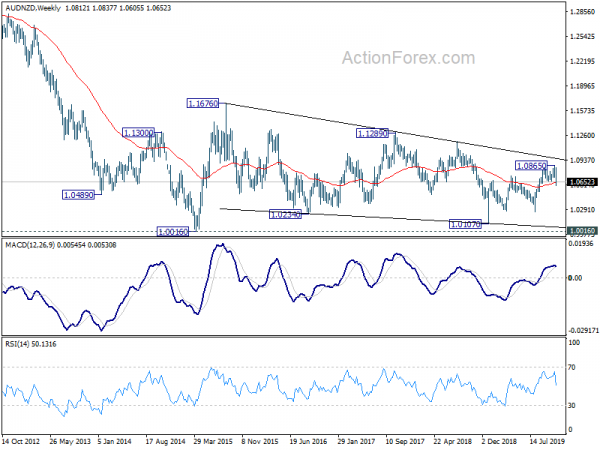 EUR/JPY’s corrective fall extended lower to 119.24 last week, but recovered strongly ahead of 119.11 support. Initial bias remains neutral this week first. We’d still expect downside to be contained by 119.11 to bring rise resumption. On the upside, break of 120.63 minor resistance will turn bias to the upside for 121.46 first. Break will resume whole rise from 115.86 to 123.35 structural resistance. However, firm break of 119.11 will argue that rise from 115.86 has completed. Intraday bias will be turned to the downside for 117.07 support. 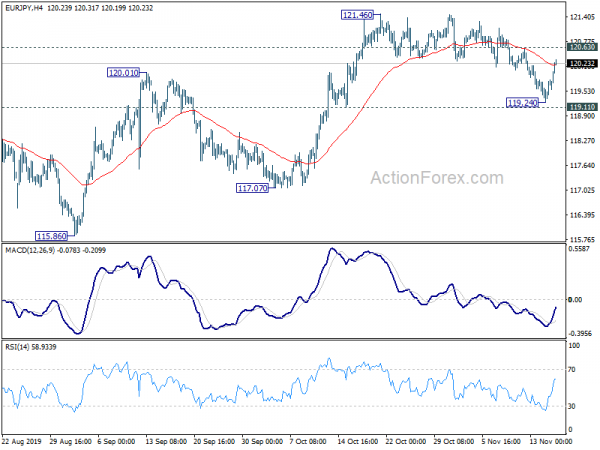 In the bigger picture, a medium term bottom should be formed at 115.86, on bullish convergence condition in daily MACD, ahead of 114.84 support. Decisive of 120.78 support turned resistance will affirm this case and bring further rise to falling channel resistance (now at 125.32). Reactions from there would decide whether the medium term trend has reversed. For now, further rise is expected as long as 117.07 support holds. 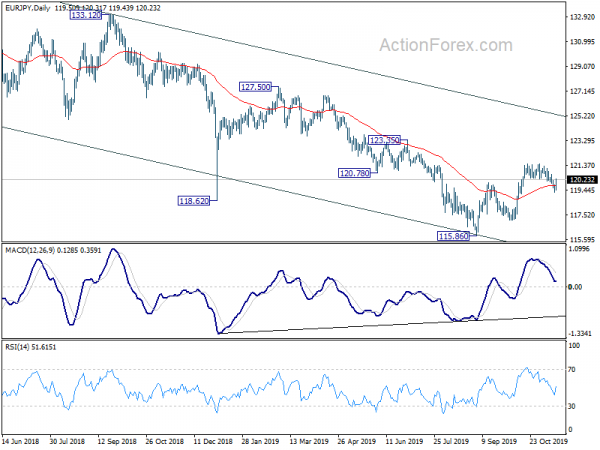 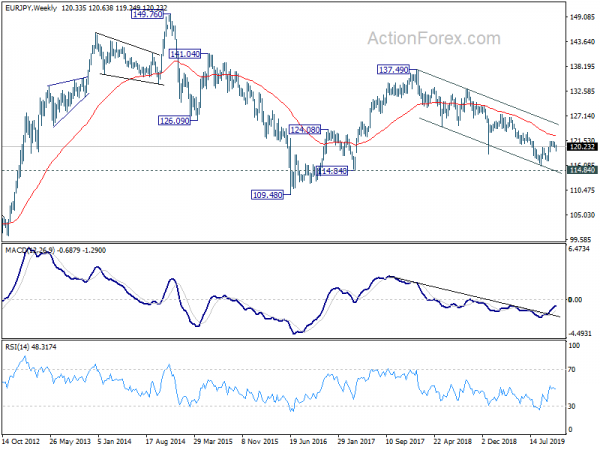 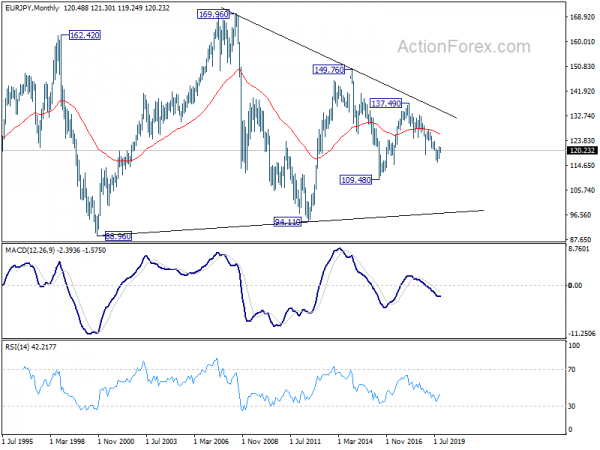