China’s new coronavirus overshadowed central bank activities last week and prompted global risk aversion. At the timing of writing, death toll jumped to 41 while more than 1300 people have been infected globally. The virus has already spread from Wuhan to other major cities in China, and globally to Asia, US, Australian and France. China’s massive quarantine of 40m people in the Hubei region is questioned. Though for now, WHO just declare that it’s an emergency in China, not globally. The development will be the most important market moving factor in the coming days, and even weeks.

In the currency markets, Yen ended the week as the strongest one on risk aversion, as well as falling yields. Sterling was the second strongest as traders pare back bet on BoE rate cut after improving business optimism and PMIs. Australian Dollar was the weakest one on risk aversion. Canadian Dollar suffered double-whammy from falling oil price as well as dovish BoC, which kept rate cut open. Dollar was generally strong with upside prospect for the near term. Yet, upside could be capped by falling yield and weakness in USD/JPY. 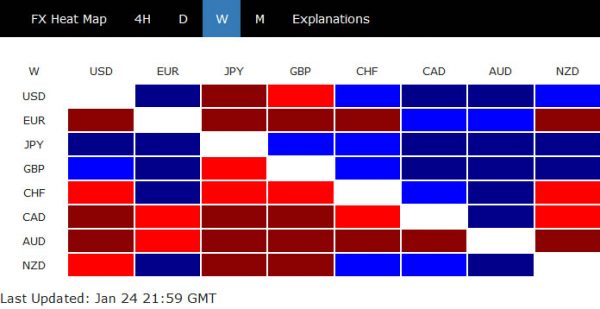 DOW in pull back after forming a short term top

DOW dropped notably towards the end of the week as risk aversion dominated. The development suggests short term topping at 29373.62. Considering that daily MACD has closed below signal line, deeper pull back is now in favor, to 55 day EMA (now at 28324.90). But downside should be contained by 38.2% retracement of 25743.46 to 29373.62 at 27986.89 to bring rebound. Long term up trend should still be in progress. DOW should follow S&P 500 and NASDAQ to have another round of upside acceleratoin ahead. 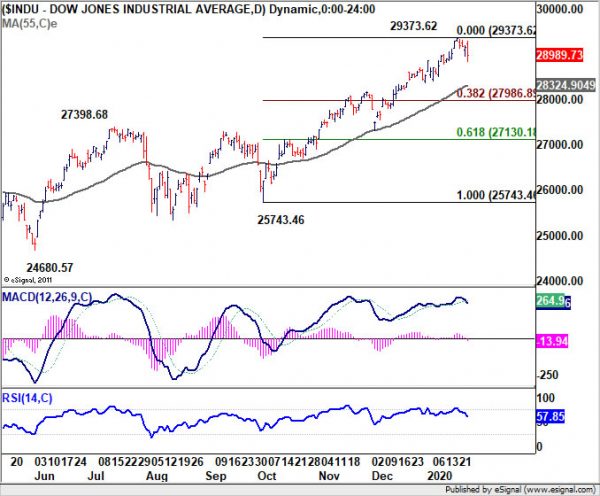 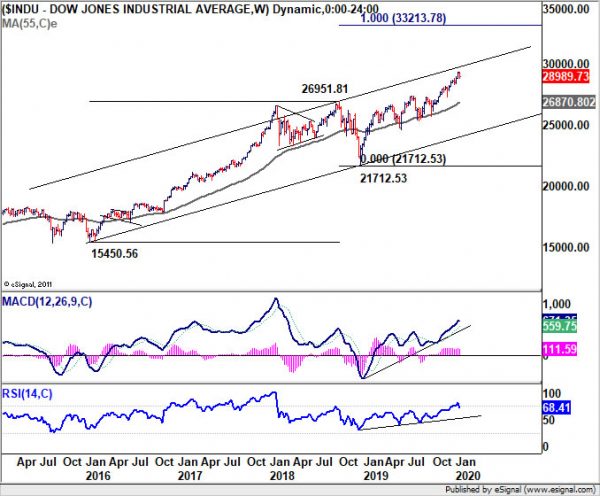 10-year yield dropped notably last week, and closed below 1.693 near term support level. The developrment suggests that corrective rise from 1.429 has completed already, after failing to break through 2.000 handle twice. Deeper fall is now in favor back to retest 1.429 low. Nevertheless, we’re not expecting a break there for the moment. Medium term sideway condition is set to extend for longer. 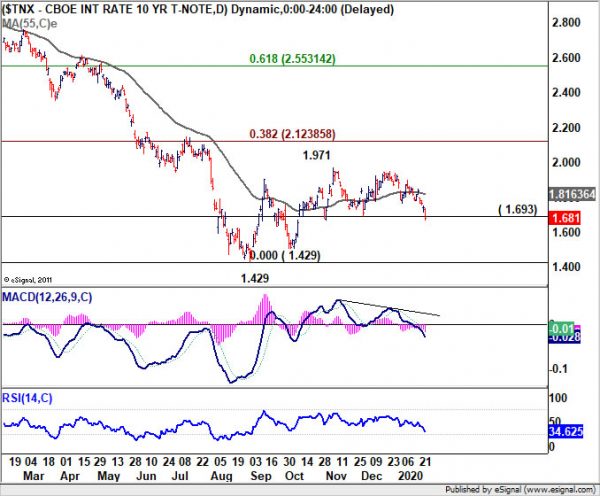 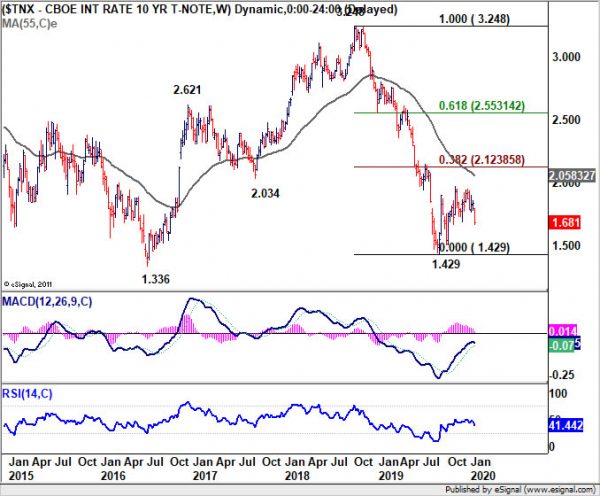 Dollar index’s rise from 96.35 extended higher last week and closed above 97.81 resistance. 55 day EMA was taken out firmly too. The development suggests that corrective fall from 99.66 has completed with three waves down to 96.35. Further rally should now be seen to 98.54 resistance for confirmation. Break will pave the way to retest 99.66 high. However, break of 97.08 support will dampen this bearish view and cold extend the corrective fall from 99.66 through 96.35. 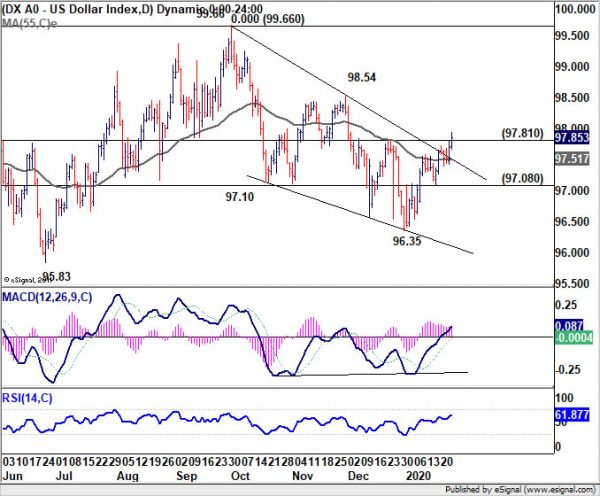 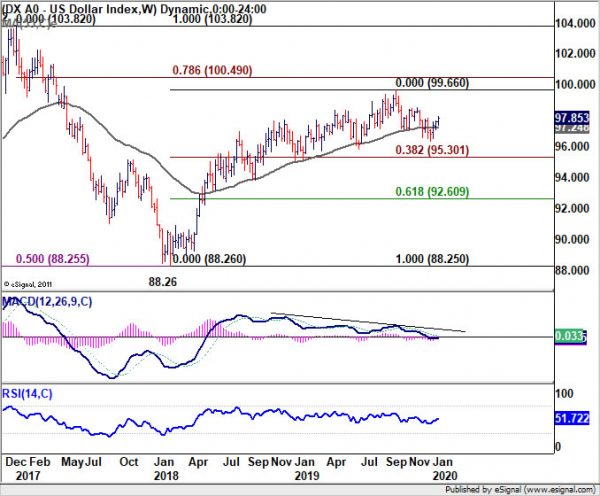 WTI heading back to 50.64 support with downside acceleration

WTI crude oil tumbled sharply last week as fall from 65.38 accelerated. Current deceline is seen as the third leg of the consolidation patterh from 66.49. Deeper fall should be seen to 50.64 support. However, as this level is close to 61.8% retracement of 42.05 to 66.49 at 51.38. We’d expect strong support from this 50.64/51.38 zone to contain downside and bring rebound. meanwhle, break of 57.35 resistance will argue that the decline is completed. 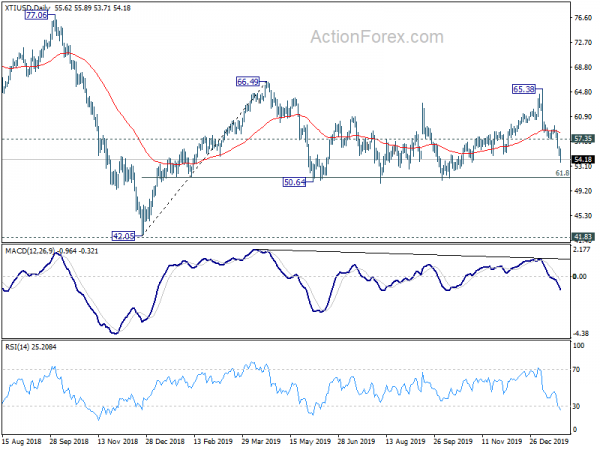 USD/JPY’s decline last week indicates short term topping at 110.28, after hitting near term channel resistance. Initial bias stays on the downside this week.. Firm break of 55 day EMA (now at 109.14) will pave the way to 107.85 support. On the upside, above 109.65 minor resistance will turn bias back to the upside for retesting 110.28 high. 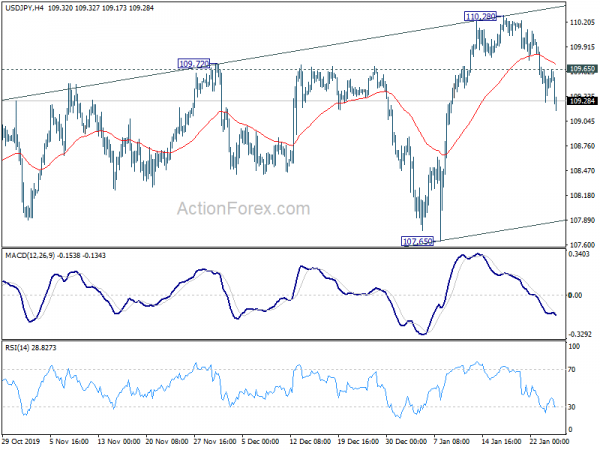 In the bigger picture, there is no change in the bearish outlook yet in spite of the rebound from 104.45. The pair is staying in long term falling channel that started at 118.65 (Dec. 2016). Rise form 104.45 is seen as a correction and the down trend could still extend through 104.45 low. However, sustained break of the channel resistance will be an important sign of bullish reversal and target 114.54 resistance for confirmation. 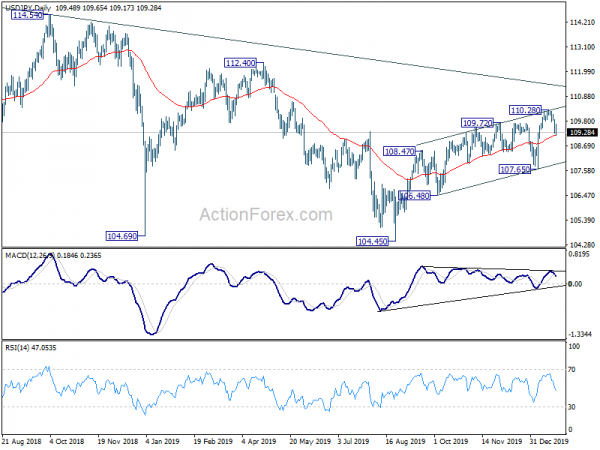 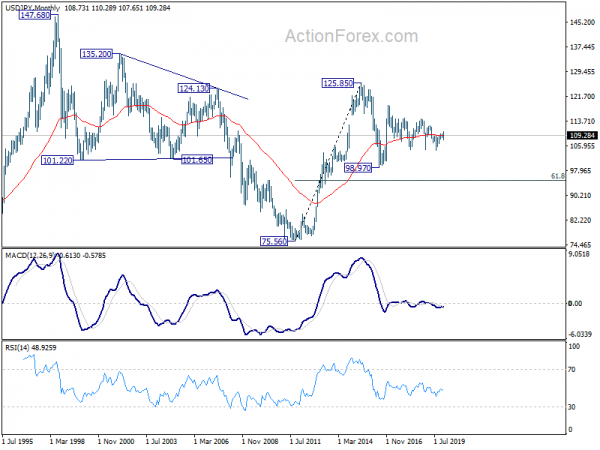 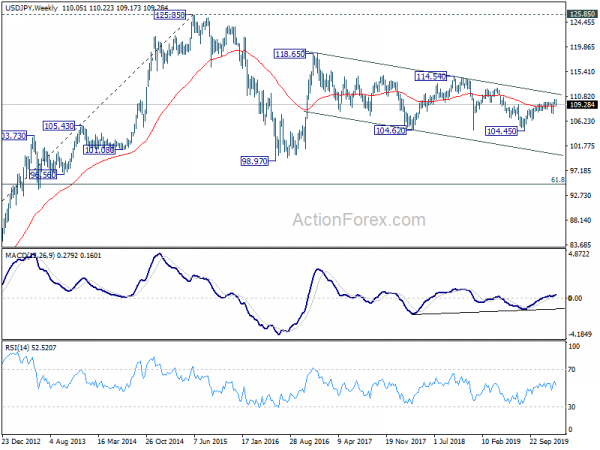