Investors in Euphoria, Betting on a V-Shaped Recovery

The global financial markets were basically in euphoria last week. Lockdown restrictions continued to be eased. ECB provided more stimulus by expanding the crisis purchase program. Surprised growth in US and Canadian employment in May argue that the worst of coronavirus pandemic is already behind us. More importantly, investors seemed to be betting on a V-shaped recovery in the US. Risks, like persistently high coronavirus infections in South American, and US-China tensions, were generally ignored.

In the currency markets, New Zealand and Australian Dollar ended the week as the strongest ones. Yen and Swiss Franc were the worst performing ones, followed by Dollar. While Euro ended just mixed, it’s bullish development is worth much attention. Both EUR/CHF and EUR/JPY broke important resistance levels last week which indicate medium term bullish reversal at least. The focus will turn to EUR/USD to see if it will eventually follow EUR/CHF and EUR/JPY to reverse the larger bearish trend. 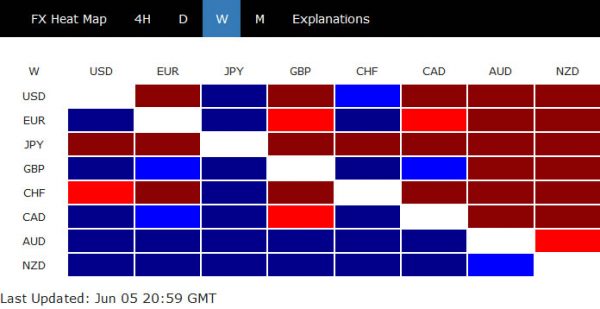 NASDAQ made new record high with no sign of topping

NASDAQ surged to new intraday record high of 9845.59 on Friday, before closing strongly at 9814.08. The strength and persistent of the rally from 6631.42 low has definitely defied all expectations. Admittedly, we’re caught to believe that such rise is the second leg of the consolidation pattern from 9838.37. But it could actually be starting a new up trend. 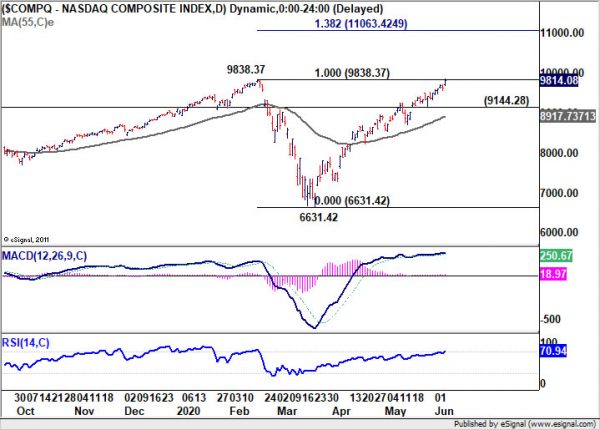 Tremendous strength was also seen across the Atlantic in German DAX, which makes the return of risk appetite rather believable. Rise from 8255.65 low is re-accelerating as seen in daily MACD. Further rally is expected as long a 11575.74 support holds, to retest 13795.24 record high. 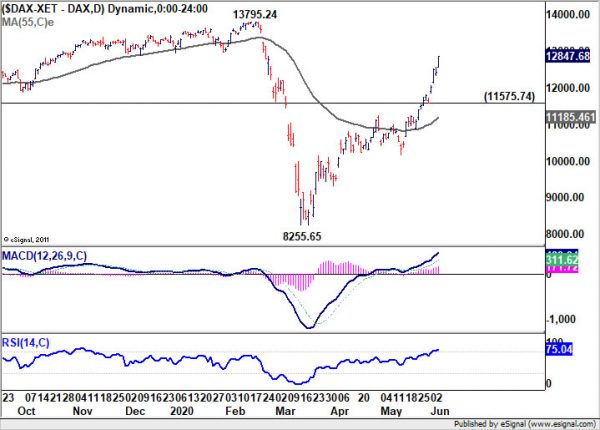 Nikkei was in upside acceleration as seen in daily MACD. Current rise from 16358.19 is expected to continue as long as 21580.50 support holds. Nikkei should target a test on pre-crisis high of 24108.10 soon. 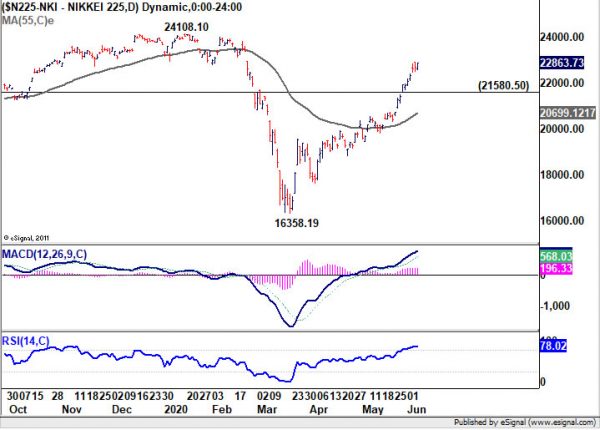 One of the most important development to us was the strong rally in 10-year yield, which closed above 0.9 handle again. The breakout from the two-month tight range suggests also serves as an indication that investors are pulling out their fund from safe-haven assets. It’s also a primary driver in broad based selloff in the Japan Yen. Though, 1% handle could be a psychological that’s too much for TNX to break through for now. 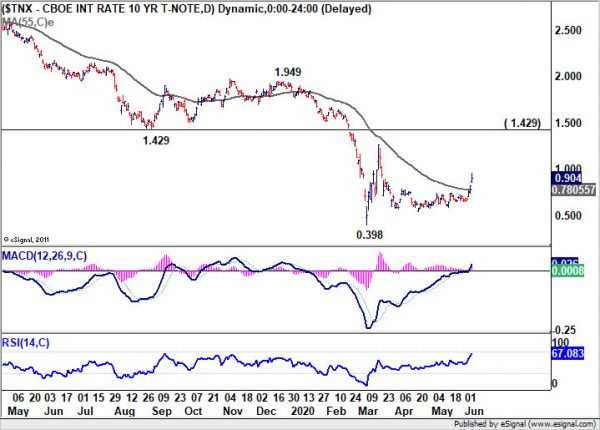 On of the mostly named risks, US-China tension, didn’t really have much impact on the markets. USD/CNH’s developments remained rather technical. Break of 55 day EMA last week suggests that rise from 6.8457 has completed after rejection by 7.1964 resistance. The consolidation pattern from 71.964 is extending with a third leg towards 6.8457 support. We’d maintain that, as long as 7.1964 resistance holds, there’s not to much to worry about the tensions yet. 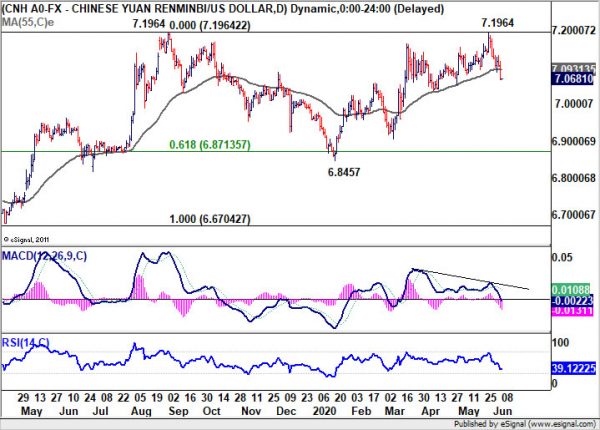 As for the Dollar index, it suffer another week of steep decline, thanks to the rally in Euro. If not for weakness in Yen, the fall in DXY would be even worse. The strong break of 55 week EMA argues that medium term rise from 88.25 could have completed at 102.99 already. For the near term, some support could be seen between 94.65 and trend line support (now at 95.50) to bring a rebound. But for the medium term, consolidation pattern from 103.82 is possibly starting another down leg, which would eventually target 88.25. 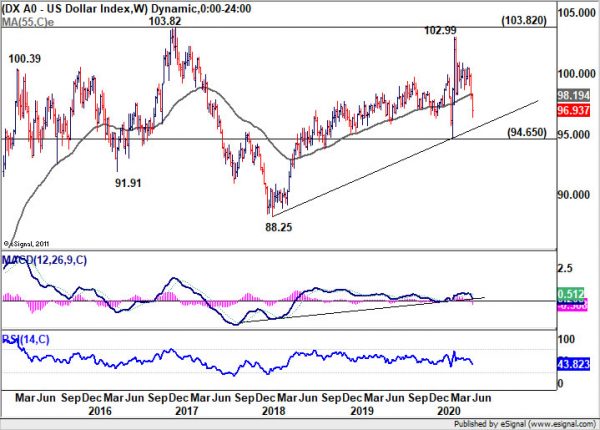 EUR/CHF surged to as high as 1.0915 last week and took out 1.0811 key resistance decisively. Intraday bias remains on the upside this week for 1.105976 cluster resistance zone next. On the downside, break of 1.0744 support is needed to indicate short term topping. Otherwise, outlook will now remain bullish in case of retreat. 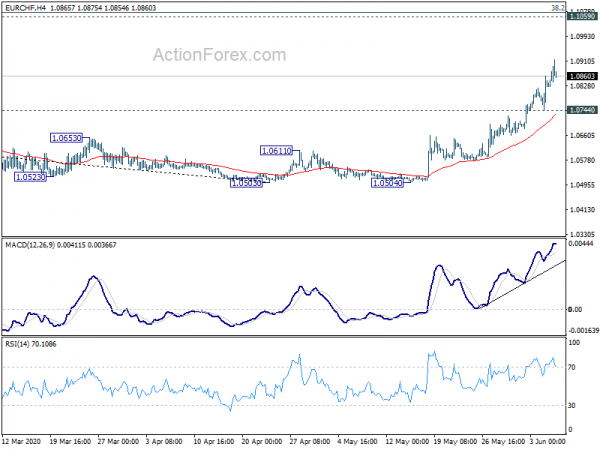 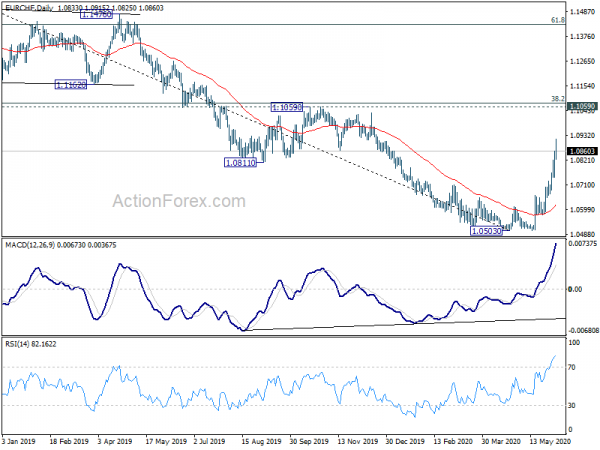 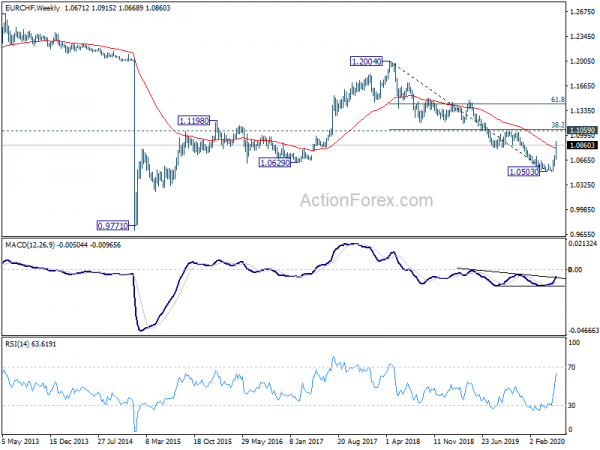 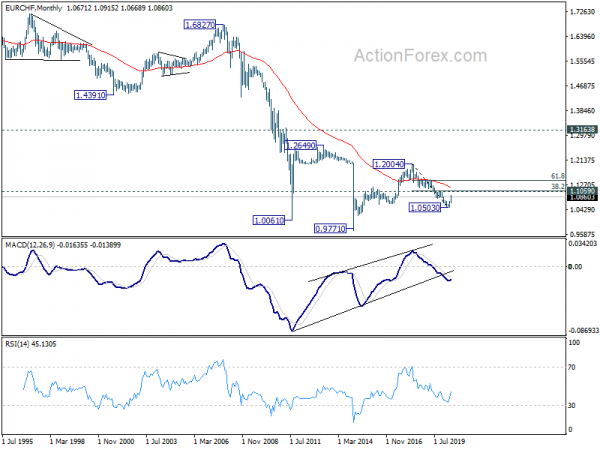