There were so many important headlines last week. USD/JPY surged to new 32-year high with support from stronger than expected CPI, and as 10-year yield broke 4% handle. Japan maintained their stance that they will act resolutely on market volatility, without actual intervention. DOW staged a historic 1500pts U-turn on Thursday but gave up much gains just the following day. Sterling rebounded further as the UK delivered episodes of political chaos.

In the end, the Pound was the biggest winner, but Dollar was not too far way. As noted below, markets are already pricing in two more 75bps Fed hikes in November and December. Euro was resiliently the third strongest. When Yen clearly struggled, it’s only the second worst next the Aussie, then followed by Swiss Franc.

After stronger than expected CPI reading in the US, investors added their bets continuation of aggressive tightening by Fed ahead. Such expectations were affirmed by FOMC minutes which highlighted policymakers’ concern on persistent inflation, and the cost of doing too little. Fed fund futures are now pricing in 97.2% chance of 75bps hike to 3.75-4.00%. 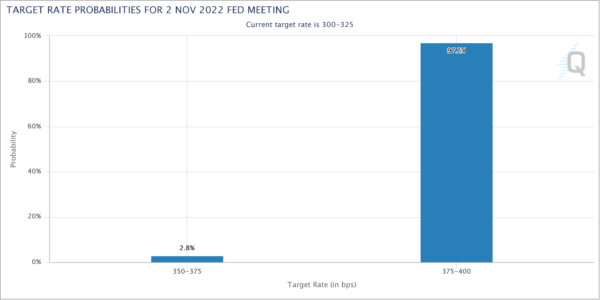 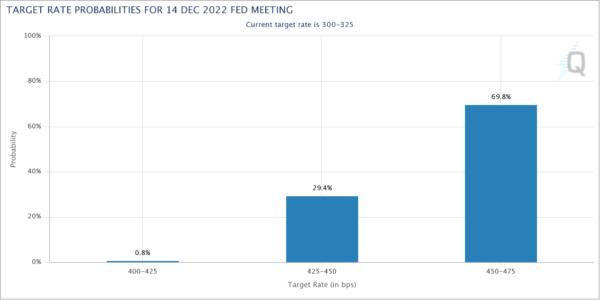 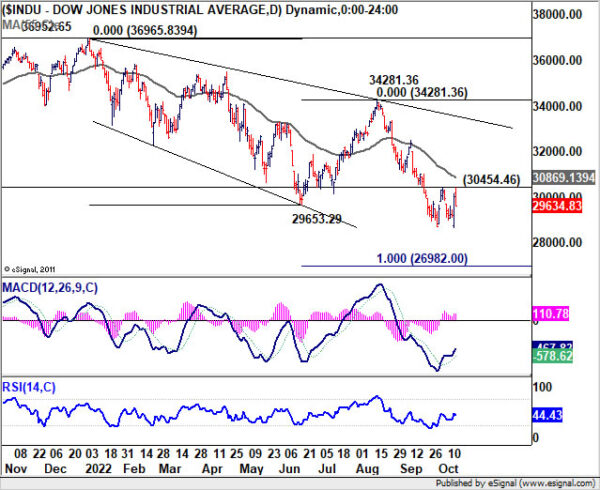 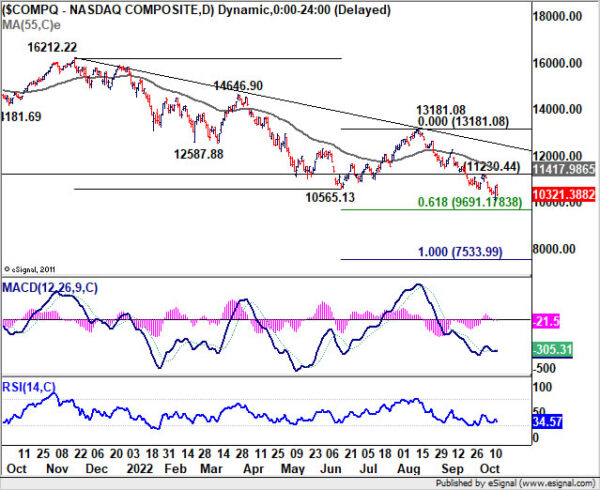 10-year yield’s up trend resumed last week and closed above 4% handle. Upside momentum is not too strong as seen in 4 hour MACD. But further rally is expected anyway. Sustained trading above 4.000 could prompt some upside reacceleration towards 61.8% projection of 2.525 to 3.992 from 3.568 at 4.474 next. 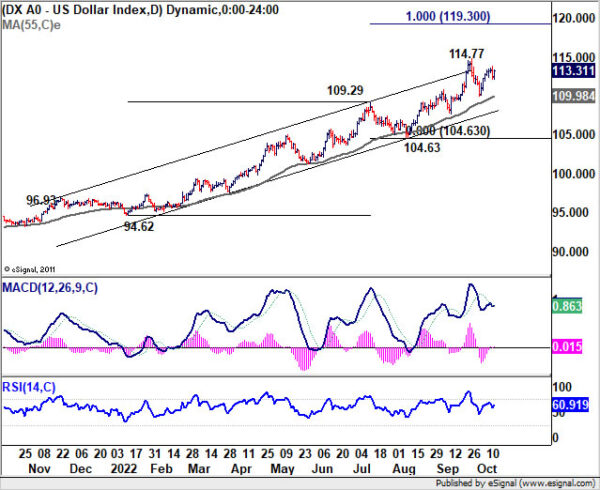 While Yen was clearly a big loser last week, Aussie was even worse. One factor is that RBA has started slowing down its tightening earlier this month, which others are maintaining the same pace. Another factor is the concern over extended slowdown in China’s economy due to its so-called zero-COVID policy, and intensifying tension with the West. 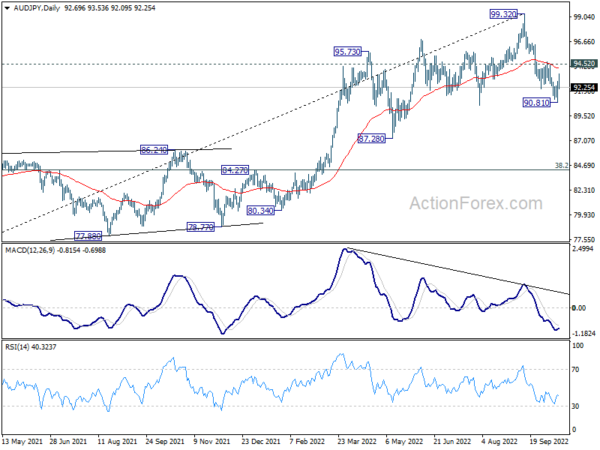 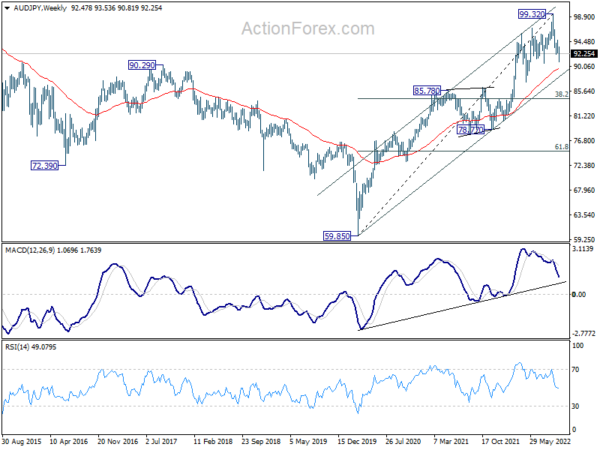 Sterling ended as the best performer, helped much by the political chaos in the UK. In the latest episode, UK Prime Minister Liz Truss sacked her Finance Minister Kwasi Kwarteng, and replaced him by former Foreign and Health Minister Jeremy Hunt. Hunt is now expected to deliver a new budget plan on October 31, which he already indicated that “some taxes will not be cut as quickly as people want, and some taxes will go up.”

As a side note, the development somewhat proves that BoE’s was right in not to panic and rush into emergency action, other than the targeted gilt stabilization operations. After all, the Brits know their country more than the others. It’s now way too soon to predict what BoE would do at the November meeting, at least not before Hunt’s budget, and BoE’s own revision on economic projections. 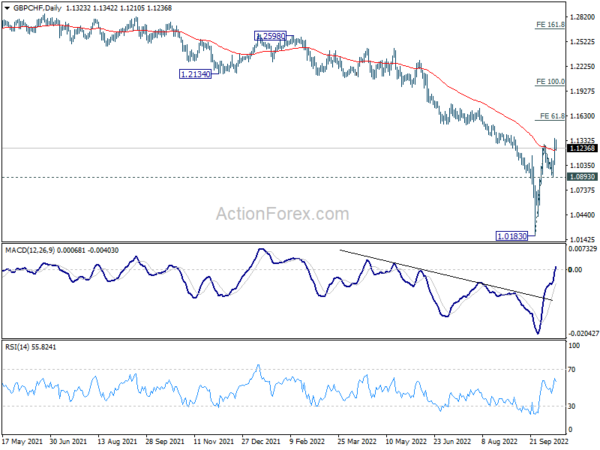 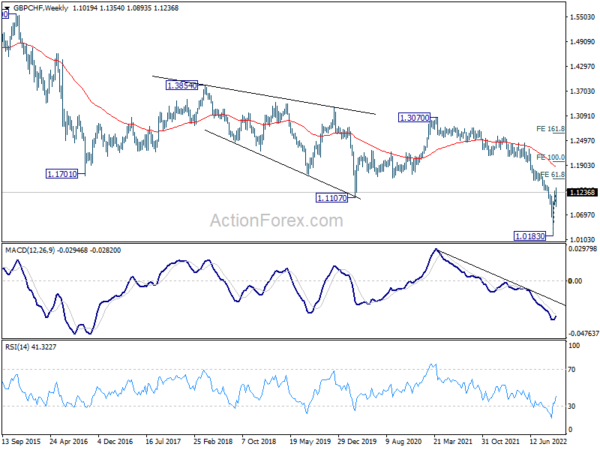 USD/JPY’s up trend resumed last week and reached high as high 148.85, breaking 147.68 long term resistance. There is no clear sign of topping yet. Initial bias stays on the upside this week for 61.8% projection of 130.38 to 140.33 from 145.89 at 149.91. Beware that Japan might intervene again there close to 150 psychological level. Nevertheless, break of 145.89 resistance turned support is needed to confirm short term topping. Otherwise, outlook will remain bullish in case of retreat. 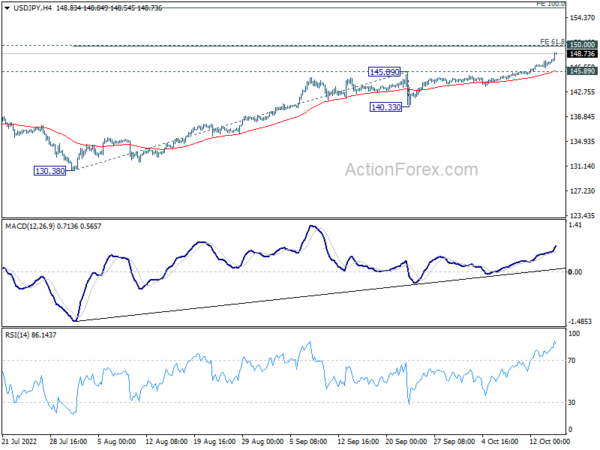 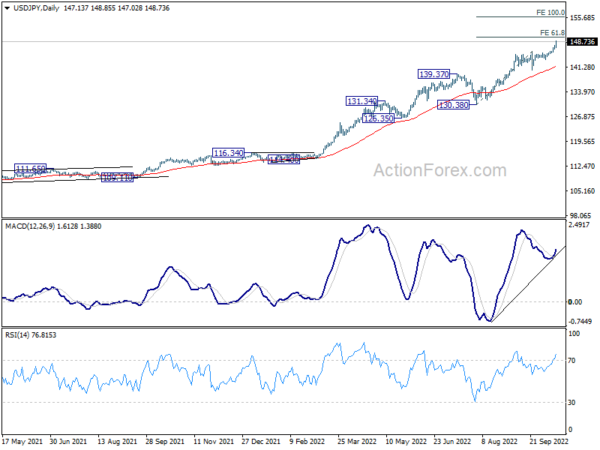 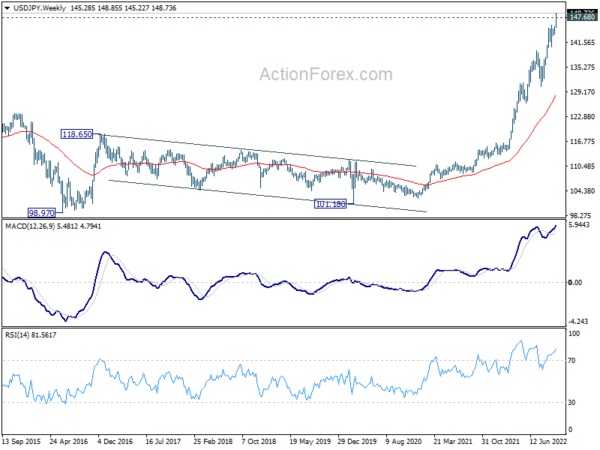