It was a rather dull week last week as US tax plan was the main market driver. Dollar ended broadly lower as investors were clearly dissatisfied with the Senate’s version of the plan, which delay corporate tax cut by a year. But judging from reactions in US stocks, comparing to European markets, sentiments were not that bad. For the moment, DOW’s up trend is still intact. Similar picture is seen in Dollar which is holding above key near term support level against all other major currencies. Indeed, US long term yields staged the strongest rally in more than a month on Friday, on worry off additional bond supply next year. And the surge in 10 year yield could provide the greenback with extra support. The economic calendar with come back this week with more important economic data, like CPI fro US and UK. And, with a tight working schedule, US tax plan will stay on top as a key focus in the markets.

DAX also hit record high at 13525.56 but retreated steeply since then. A short term top is in place and more corrective trading would be seen. But outlook will remain bullish as long as 12911.58 support holds. The larger up trend is expected to continue through 13525.56 high. However, firmed break of 12911.58 will be an early sign of medium term reversal and bring deeper fall to trend line support (now at 12347. )

FTSE’s sharp decline last week and firm break of 55 day EMA suggests that rise from 7196.58 has completed at 7582.85, ahead of 7598.99 high. Fall from 7582.82 is tentatively viewed as the third leg of the pattern from 7598.99 and could target 7196.58 support. At this point, we’d expect strong support from there to bring rebound. However, firm break there will complete a double top reversal pattern and will indicate medium term trend reversal.

10 year yield’s strong rebound of Friday argues that pull back from 2.475 has completed at 2.304, after drawing support from 55 day EMA. More importantly, as 2.273 structural support remains intact, so is near term bullish outlook. That is, we’re holding on to the view that correction from 2.621 has completed at 2.103. And rise from 2.034 is still in progress and would resume through 2.475 to retest 2.621 high later.

Dollar’s pull back last week is seen as a correction for the moment. And we’re expecting more dollar buying ahead as the reconciled tax plan of House and Senate emerges. Hence, we’ll stay with out USD/JPY long position (bought at 114.50). Stop will be kept at 112.80. As noted before, the medium term correction from 118.65 should have completed at 107.31. We’d expect a strong break of 114.49 key resistance later to confirm this bullish view. 118.65 is the first target. We’ll look at the upside momentum on rally resumption to gauge the chance of hitting 2015 high at 125.85 at a later stage.

Meanwhile, RBA monetary policy statement released on Friday confirmed the view that the central bank will stay on hold. Monetary policy divergence will keep AUD/USD pressured. We’ll try to sell AUD/USD on break of 0.7624 this week. In our view, the medium term rise from 0.6826 should have completed with three waves up to 0.8124. Going forward, first target is 0.7328 cluster support (61.8% retracement of 0.6826 to 0.8124). But we’ll also look at downside momentum to assess the chance of breaking through 0.6826 low to resume the long term down trend. Stop will be placed at 0.7710, slightly above last week’s high.

AUD/USD’s consolidation from 0.7624 continued last week and outlook is unchanged. Initial bias remains neutral this week first. In case of another recovery, upside should be limited well below 0.7896 resistance to bring fall resumption. On the downside, decisive break of 0.7624 will resume whole fall from 0.8124 and target next key cluster level at 0.7322/8. 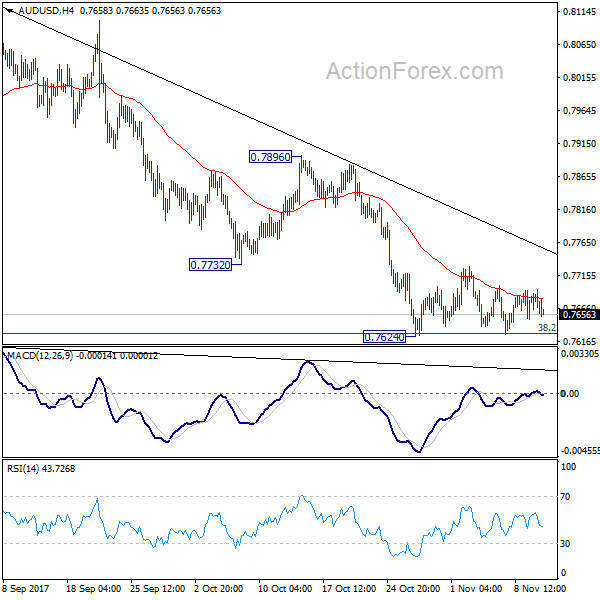 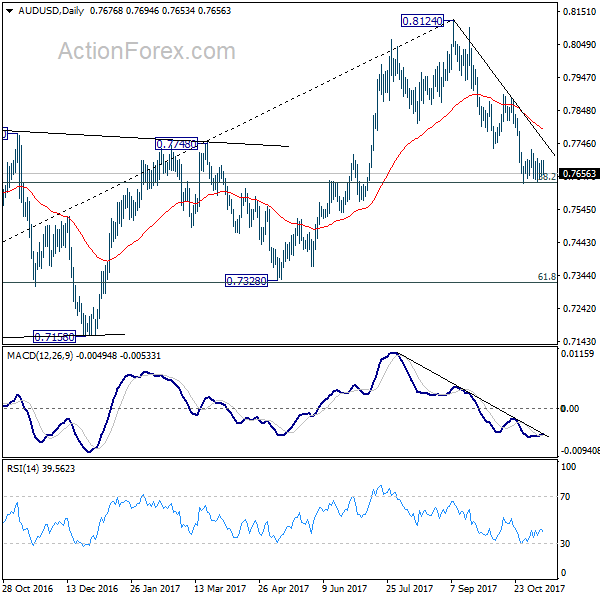 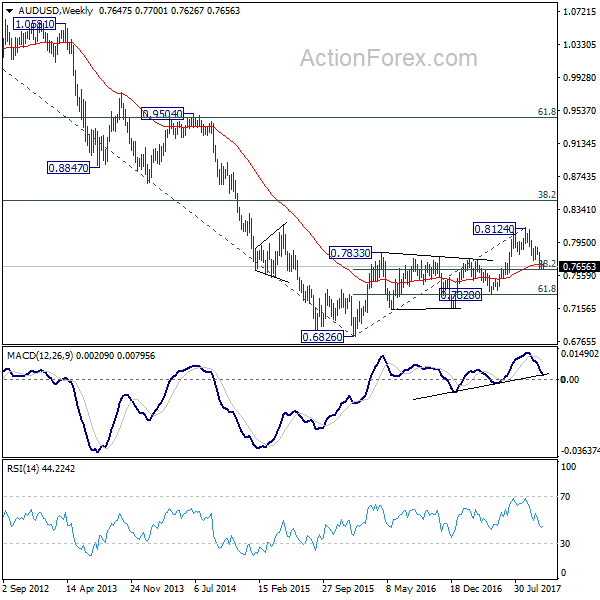 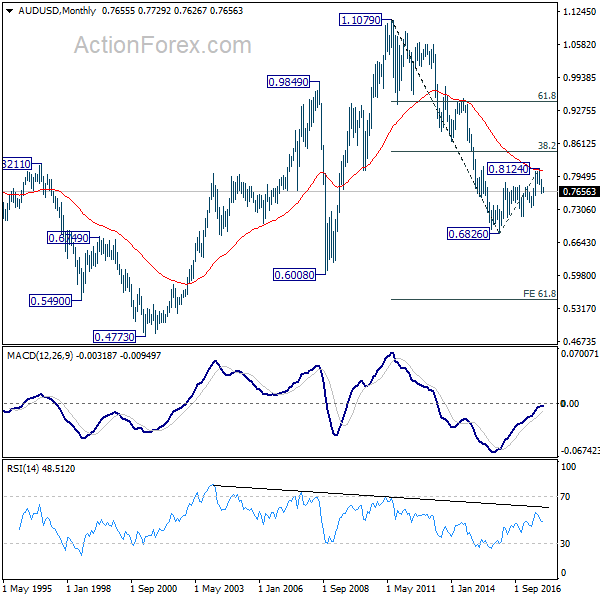