Dollar to Take the Spotlight Back as Senate Passed Tax Bill

Dollar took a back seat last week as traders were cautious ahead of the Senate’s vote on the tax bill. Sterling took lead instead as boosted by positive Brexit news, as UK and EU seemed to have agreed on the divorce bill and Irish border. Canadian Dollar followed as the second strongest as stellar employment data raised the chance of more BoC hike next year. Meanwhile, Yen ended as the weakest one. It’s followed by Euro, despite solid Eurozone data. Now, with the tax bill finally passed in Senate on Saturday, the greenback would likely come back to spotlight this week, with non-farm payroll also featured.

After marathon debate and numerous amendments, Senate Republicans finally passed their version of the tax bill on Saturday, by 51-49 vote. Bob Corker was the only Republican who dissented. Even Rob Johnson, the first one openly objected the bill, and Susan Collins, the one who was forever unsure, voted for the bill after getting something they wanted. Republicans will now move on to reconcile the versions of House and Senate, starting as soon as Monday. The party targets to put the legislation for President Donald Trump’s signature by the end of the year.

Secondly, stocks suffered sharp intraday selloff on Friday on news that the Russian probe is getting closer and closer to the White House. Former national security adviser Michael pleaded guilty confessed lying to FBI regarding his contacts with Russian Ambassador Sergey Kislyak. And there could be a possibly testimony of Flynn against Trump ahead. In any case, it’s very likely that the Russian Probe would widen further. The news sent DOW to as low as 23921.90 on Friday before ending at 24231.59, down just -0.17%.

The strong rebound in DOW has indeed showed much resilience in the index. And the intraday dip was merely a knee jerk reactions. We’d pointed out in prior report that after a year of working with Trump, the Republicans finally found their way. And that is, ignore his political outcries and carry on business as usual. The development of the tax bills showed that House and Senate Republicans were working on their own. So, news about the Russian Probe could cause some jitters in the markets but unlikely a trend change.

DOW heading to 24642 as up trend extends

Similar jitter was seen in 10 year yield on Friday, when it dipped to as low as 2.315 but closed at 2.362. TNX is so far holding on to 55 day EMA, and well above 2.273 key support. Thus, it’s maintaining near term bullish outlook. For the moment, we’d expect the TNX to resume the rebound from 2.034 through 2.475 to 2.621 key resistance later. The development in stocks and yield would provide the needed support for Dollar index to rebound.

DXY could be finishing pull back soon

Development of Euro will be a crucial factor on the fate of the Dollar index. Before looking ahead the common currency, we’d like to point out that European stocks were surprisingly weak in spite of positive economic data. Some might attribute Friday’s sharp fall in DAX to the news regarding Russian Probe in the US. But after all, prior range trading and the sharp downside breakout does show much vulnerability. Such vulnerability might be due to uncertainty over German coalition talks. Or it could be due to the concerns over the large swing in Eonia which could be due to market stress. We’re uncertain on the reason yet but the development is worth close attention.

While Euro is maintaining near term bullishness against Dollar, Yen, Swiss Franc and Aussie, momentum is getting more unconvincing after the last up swing. In particular, bearish divergence is clearly seen in 4 hour MACD in EUR/CHF with recent price action in terminal triangle shape. Near term reversal could be around the corner. 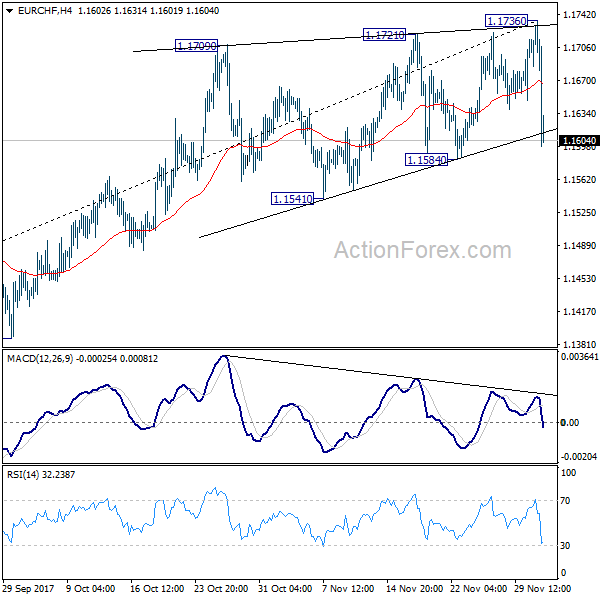 EUR/AUD could have formed a short term top at 1.5770 and deeper fall would be seen back to 1.5458 support and below. The cross might only get enough support near to 1.5226 key level. 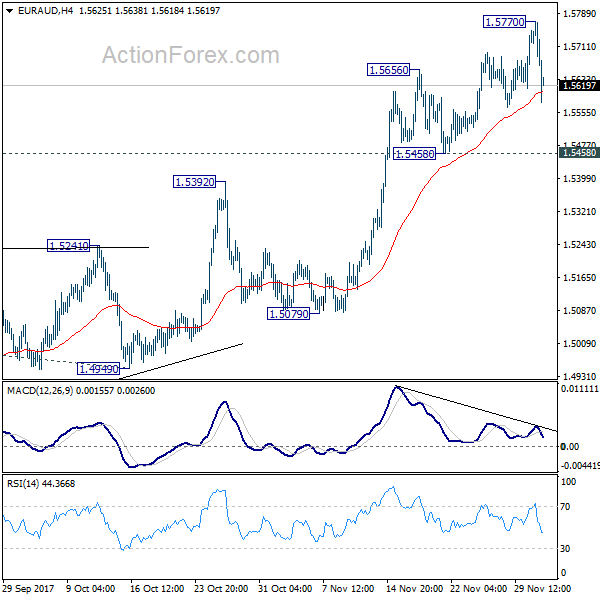 EUR/GBP has been range trading since September. Technically, consolidative price actions indicate fall from 0.9305 is not completed yet. Fundamentally, recent breakthrough in Brexit negotiations suggest that there could finally be a breakthrough in the December EU summit to move on to trade negotiations. In that case, EUR/GBP could finally resume the fall from 0.9305 towards next key level at 0.8303. 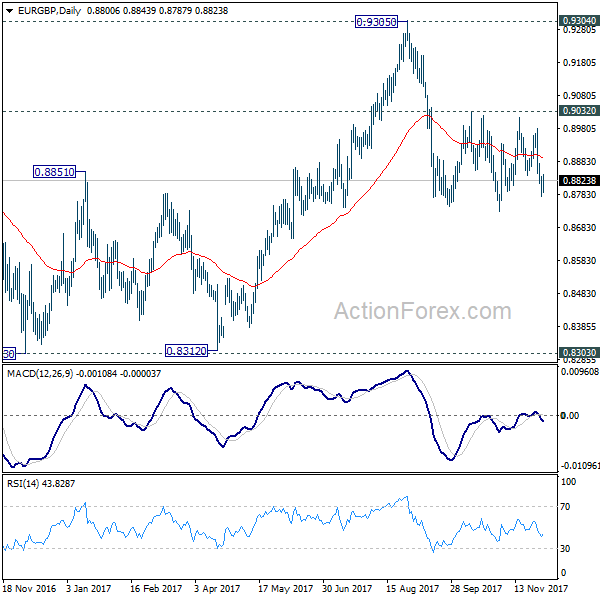 Regarding trading strategies, there two options to consider. Canadian Dollar could be a candidate to buy as strong employment data revived hop for more BoC rate hike next year. AUD/CAD is a good one fundamentally on policy divergence but it’s too close to 0.9591 support. CAD/JPY could also finished recent pull back from 91.62 but there China stock rout may not be completed yet. And there seems to be an underlying theme of flattening yield curve that would give Yen some support. And we’d prefer not to sell USD/CAD as Dollar could be boosted by passage of the tax bill.

Another option to consider is selling Euro. For example, EUR/CAD could have topped at 1.5371 after failing to sustain above 1.5279 resistance (2016 Nov high). But after climax selling on Friday, EUR/CAD could stage a brief recovery first. Selling EUR/GBP could on be consider on positive Brexit news. But then it could also have another up-leg as recent consolidation extends, before finally staging a downside breakout. Hence, patience is required in both short strategy. Considering the clearer technical picture, we’d try to sell EUR/GBP on recovery to 0.8880, around mid point of recent range, with a stop at 0.9050. 0.8300 will be put as the target first. 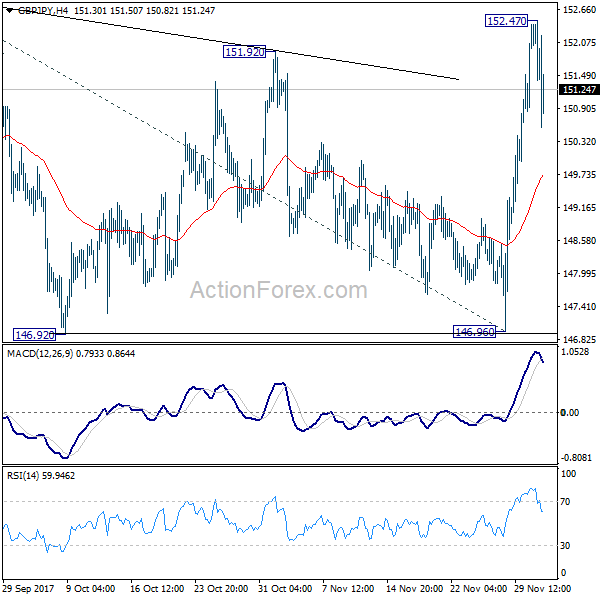 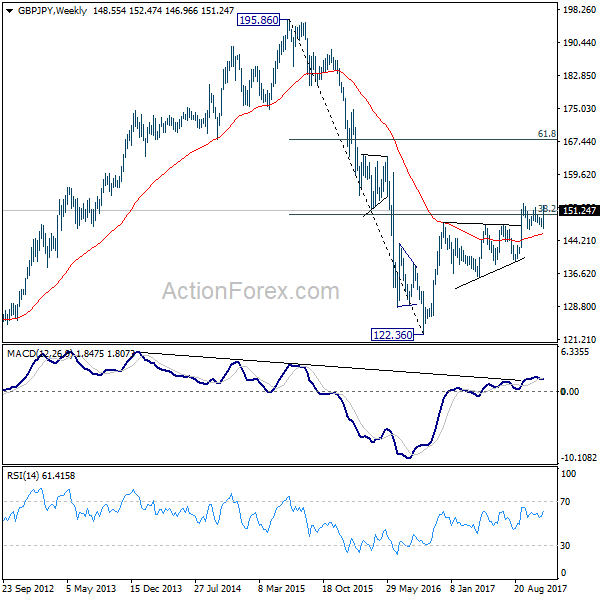 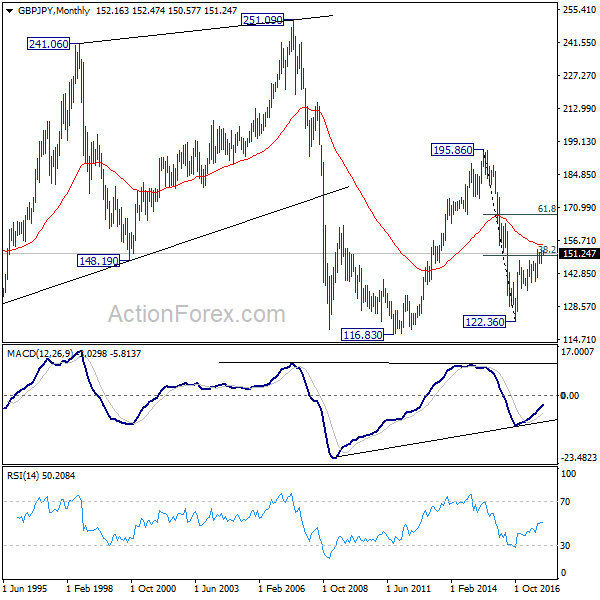