Action Forex
HomeMarket OverviewWeekly ReportYen and Franc Ended as the Weakest Ones as Risk Aversion Temporarily...

Yen and Franc Ended as the Weakest Ones as Risk Aversion Temporarily Eased, Reaction to Syria Strikes Watched

Easing risk aversion was the main theme last week as Japanese Yen and Swiss Franc ended as the weakest two. It’s not the kind that investors were in euphoria. But nonetheless, major stock indices around the world ended up higher. Dollar ended as the third weakest despite markets firming up pricing for June and September Fed hike. Euro followed as the fourth weakest as cautious ECB meeting accounts disappointed Euro bulls. On the other hand, commodity currencies ended as the strongest ones, led by Canadian Dollar, which was additionally supported by surge in oil price on Syria tension. Australian Dollar and New Zealand Dollar ended as the second and third strongest, followed by British Pound.

We’d like to emphasize it’s just that risk aversion eased, but not return of risk appetite. Overall, we sensed a lot of nervousness in the markets. It’s kind of strange feelings that it looked that the markets were about to breakdown, but every time there was a certain turn and everyone was relieved. Anyway, Chinese President Xi Jinping’s speech at the Boao Forum for Asia was welcomed as there was at least no escalation in trade tension between China and US. That was also followed by outlines of some reforms to open up the Chinese markets to foreign investments quicker. But the problem was not solved yet. And there were rumors that US will come back with the details of tariffs of additional USD 100b of Chinese products, as soon as this week.

Also, US, UK and Franc finally launched attack in Syria in retaliation for a chemical weapon attack outside Damascus by Bashar al-Assad’s regime late Friday, early Saturday. It’s a “one-time shot” according to US Defence Secretary Jim Mattis. For now, we don’t know how the markets are going to to react to this on Monday. At the same time, the strike also triggered furious response from Russia. Anatoly Antonov, Russia’s ambassador to the US responded by writing on Facebook that “Our worst apprehensions have come true. Our warnings have been left unheard.” And, “we warned that such actions will not be left without consequences.” He also condemned that “insulting the President of Russia is unacceptable and inadmissible” apparently referring to US President Donald Trump’s mention of Russian President Vladimir Putin is his speech.

Technically speaking, the rebound in US equities were corrective looking. European indices were also held below near term resistance. The markets were clearly not out of the woods yet. Reactions to the Syria strike and developments in US-China trade tensions would be important for the market this week.

Rebound in global equites was corrective in nature, more risks ahead

European indices looked a little bit better. But still, DAX will need to overcome 12601.46 resistance to confirm near term reversal.

FTSE also has to take out 7326.02 resistance to confirm near term reversal too.

Market pricing 100% chance of June Fed hike, but dolllar got no lift

With March core CPI accelerated to 2.1% yoy, and after comments from Fed officials as well as FOMC minutes, markets are firming up their expectation on June Fed hike. Fed fund futures are now pricing in 100% chance of 25bps hike to 1.75-2.00%.

But Dollar is getting no support from Fed expectations with dollar index continued to struggle in established range. We’d maintain out view that as it’s getting close to medium term trend like resistance. A breakout is likely imminent. Only that it “could be very soon or not so soon at all!” Break of 88.25 will pave the way to 61.8% retracement of 72.69 to 130.82 at 84.58. We maintain the view that fall from 103.82 is a corrective move. And strong support is expected from 84.58/75 to contain downside and bring sustainable rebound finally. 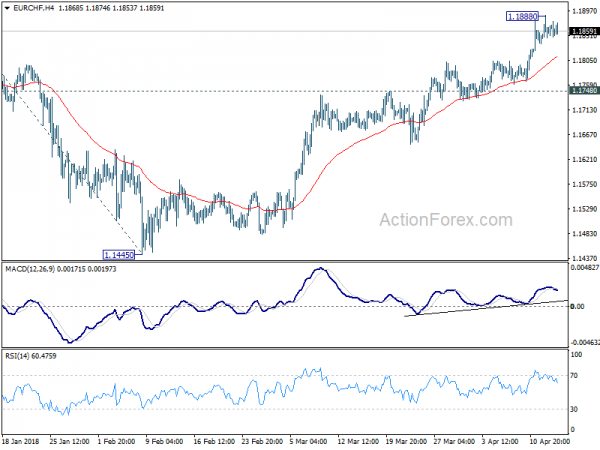 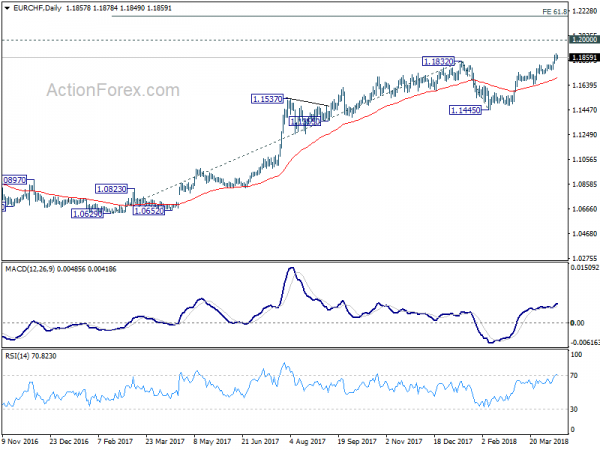 In the bigger picture, decisive break of 1.1832 should now extend the medium term up trend through prior SNB imposed floor at 1.2000. 2013 high at 1.2649 should be the next target. Outlook will remain bullish as long as 1.1445 support holds, even in case of deep pull back. 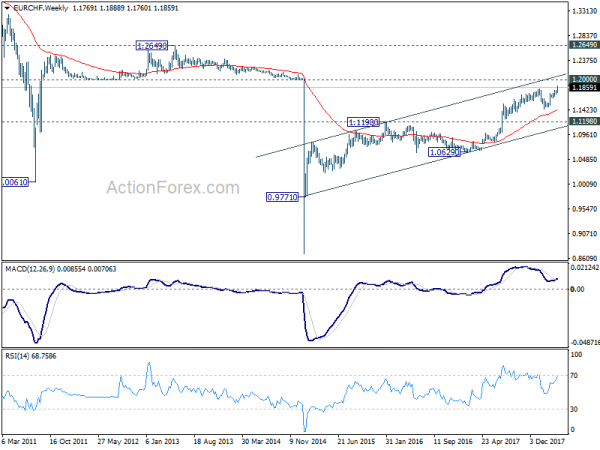 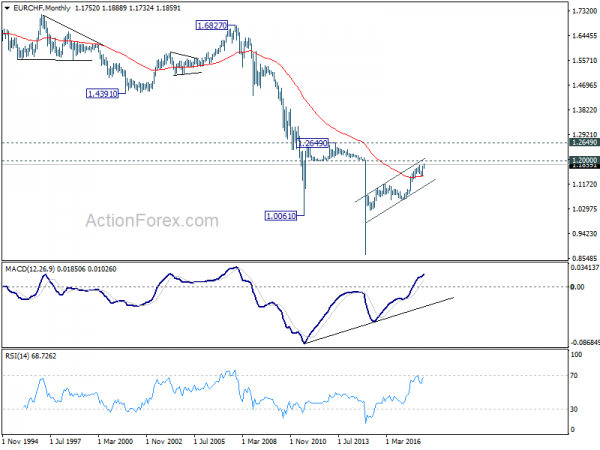