Dollar ended last week broadly higher except versus the Japanese Yen. While economic data from the US were generally disappointing, they were not bad enough to alter Fed’s path of three rate hikes this year. Just that, the data didn’t add to the chance of the fourth hike in December. On the other hand, data from Eurozone and UK re-confirmed the slowdown in Q1 and the lack of solid momentum in the rebound in Q2. Such development added to the case for ECB to exit stimulus later, and for BoE to delay the next rate hike. The change in ECB and BoE expectations continued to be reflected in France, Germany and UK stock markets. And equally importantly, German bund yield and UK Gilt yield ended deeply lower. Together with retreat in US treasury yields, they provided the boost to Yen, which ended as the strongest one. And not surprisingly, Sterling and Euro were the biggest losers last week.

To recap, US headline PCE accelerated from 1.7% yoy to 2.0% yoy in March. Core PCE also accelerated from 1.6% yoy to 1.9% yoy. That was the main positive set of data last week. ISM manufacturing dropped to from 59.3 to 57.3 in April. ISM services dropped to 56.8, down from 58.8 and missed expectation of 58.1. Finally, non-farm payrolls reports showed only 164k job growth in April, below expectation of 194k. Unemployment rate did drop from 4.0% to 3.9%. But wage growth was disappointing, with average hourly earnings risen merely 0.1% mom versus expectation of 0.2% mom.

Nonetheless, the FOMC statement showed slightly more hawkish tone on inflation. Fed noted that “both overall inflation and inflation for items other than food and energy have moved close to 2%”. That’s somewhat an upgrade fro March description that those barometers “have continued to run below 2%”. Additionally, the members judged that “Inflation on a 12-month basis is expected to run near the Committee’s symmetric 2% objective over the medium- term”. In March, they expected inflation to “move up in coming months” and “to stabilize around the Committee’s 2% objective over the medium- term”. They viewed the risks are “roughly balance” in both meetings. Yet, the reference that “the Committee is monitoring inflation developments closely” was removed in May. This evidenced the members growing confidence that inflation would reach the target as expected. More in FOMC More Hawkish on Inflation, June Rate Hike a Done Deal

After a week of heavy weight events, Fed fund futures are still pricing in 100% odds of a June Fed hike. Chances priced in for September and December rates are largely unchanged. September odd at around 73-4%, December odd at only around 42-43%.

10 year yield extended the pull back from 3.035 short term top as expected. And thus, it provided little support to Dollar over the week. Stocks were also mainly driven by earnings as DOW engaged in very volatile trading inside recently established range. The pattern from 3.035 so far argues that it’s only in a near term correction. That is, we’re now leaning towards the case of strong support from 55 day EMA (now at 2.845), which is also close to channel support, to contain downside. Retest of 3.036 (2013 high) key resistance could be seen earlier then we originally thought.

Dollar index’s solid rally last week was mainly driven by selloff in EUR/USD. But after all, the firm break of 100% projection of 88.25 to 90.29 from 89.22 at 91.90 argues that rise from 88.25 is an impulsive move. That adds to the case of medium term trend reversal. The loss of momentum in some dollar pairs suggests that a near term retreat is possibly due in greenback. But in any case, near term outlook in DXY will remains bullish as long as 90.93 resistance turned support holds. We’d expect further rise ahead to 161.8% projection at 93.55 next. That could hinge on the April CPI figures to be released on Wednesday.

Eurozone GDP growth slowed to 0.4% qoq in Q1, down from prior 0.6% qoq. Headline CPI slowed from 1.3% yoy to 1.2% yoy in April, below expectation of 1.3% yoy. Core CPI was even worse, slowed from 1.0% yoy to 0.7% yoy, below expectation of 0.9% yoy. Would the data give ECB President Mario Draghi and his colleagues better ideas on the factors behind Q1 slowdown? We may get some hints from their comments later. But for now, April’s fall in inflation will definitely trigger some deep thinking in their minds. The questions in the markets remain. That is, will ECB stop the EUR 30B monthly asset purchase program after September? We may not get the answer in June meeting.

The speculation that ECB could extend the asset purchase program, even tapered, drove European stocks high. France CAC 40 is a clear example. It should be noted that French data were not too bad. Yes, Q1 GDP slowed more than expected from 0.7% qoq to 0.4% qoq in France. However, France PMI composite hit a 2-month high in April at 56.9. On the other hand, German PMI composite hit 19-month low at 54.6. France maybe enjoying a stronger rebound in Q2 than others in the region. And that could explain the better performance in CAC 40 than DAX.

UK PMI manufacturing dropped from 55.1 to 53.9 in April, below expectation of 54.8. Construction PMI was a surprise that rose from 47.0 to 52.5 and beat expectation of 50.5. UK Services PMI rose from 51.7 to 51.8, but missed expectation of 53.5. Collectively, the PMI data suggested that rebound in Q2 was far from being strong. And as Markit noted in the release, “the three PMI surveys collectively showed only a muted rebound in business activity after being disrupted by heavy snowfall in March, failing to regain February’s pace of growth to suggest that the underlying performance of the economy has continued to deteriorate.” And the data will ” add to expectations that the MPC will take its finger firmly off the rate hike trigger. Any further slowing will also raise questions as to whether the November rate hike may have been ill-timed.”

BoE is now not expected to raise interest rate in the coming Thursday on May 10. Nonetheless, it could still be market moving. Firstly, BoE will release the quarterly Inflation Report and we’ll see how the data released in the past three months affect the growth and inflation projections. Secondly, it would be interesting to see if the two known hawks, Ian McCafferty and Michael Saunders, would change their mind and refrain from voting for rate hike again.

FTSE’s rally from 6866.93 continued last week and reached as high as 7572.98. With the help of receding BoE hike expectation, and depreciation of Sterling, we’d expect the index to extend such rise to retest 7792.56 high next.

Finally, we’d like to point out that German bund 10 year yield and UK Gilt 10 year yield have been in down trend since since late May. That’s very much due to weak data as well as expectations on ECB and BoE rate path. It’s seems rather apparent that EUR/JPY and GBP/JPY are following the path of bund and gilt yields since the start of the year, rather than risk sentiments. And for the same reason, even though Dollar was strong, Yen was stronger as US 10 year yield retreated. 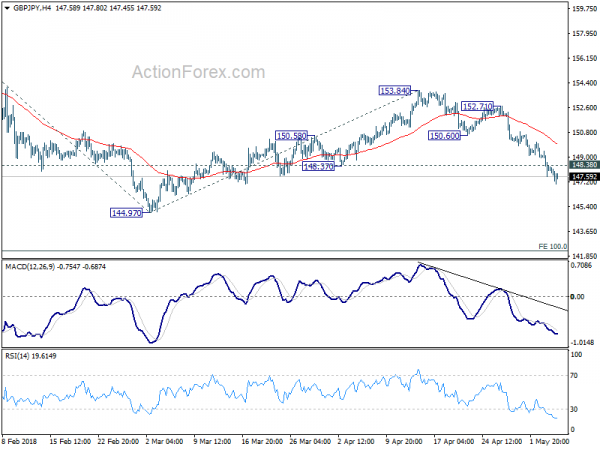 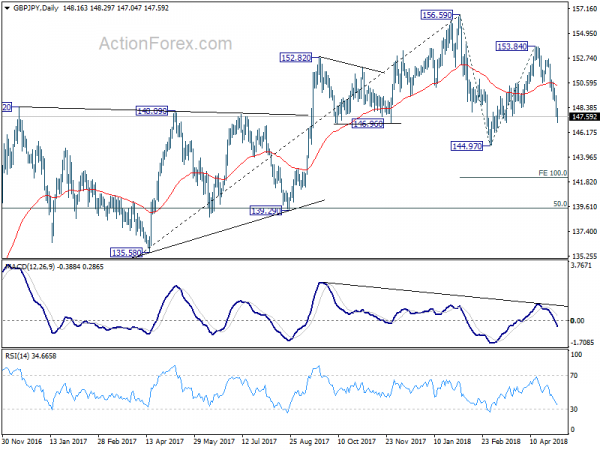 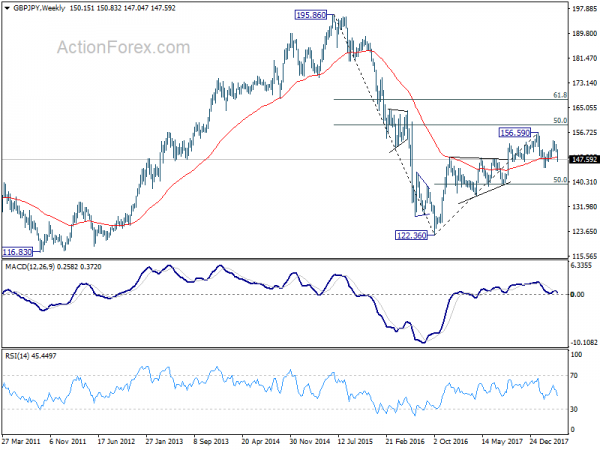 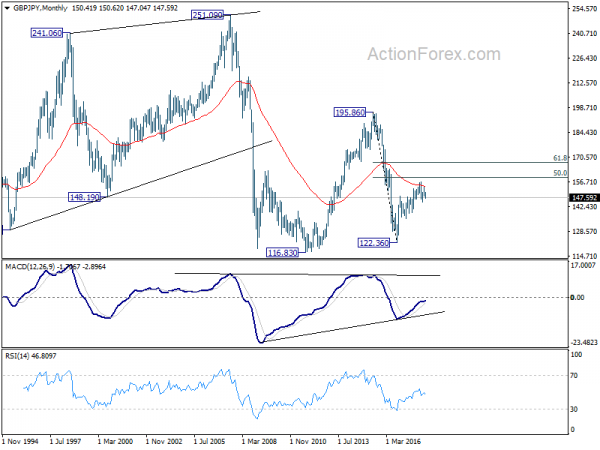