Crude oil prices have remained firm, supported by positive news from both OPEC+ and better demand/supply outlook. The latest monthly report by the International Energy Agency (IEA) has depicted a more optimistic outlook on the oil market. The agency raised its global oil demand forecast to 91.7M bpd for this year, up +0.5M bpd from May’s estimate. While this still marks a record -8.1M bpd decline from the demand in 2019, the market was thrilled by the sharp rebound of +5.7M bpd in 2021.

We remain cautious about the oil market. The second wave of coronavirus outbreak is looming in China, the world’s largest oil importer. Meanwhile, the pace of economic recovery in the country is not as strong as previous anticipated. Released on Monday, major macroeconomic indicators for May improved, but missed expectations. Industrial production expanded +4.4% y/y in May, following a +3.9% growth in the prior month. The market, however, anticipated a strong rebound of +5.5%. Retail sales contracted -2.8% y/y, after a -7.5% fall in May. This also came in worse than consensus of -2%. Urban fixed asset investment declined -6.3% y/y in the first 5 months of the year. Although this marks an improvement from the -10.3% y/y contraction in the first 4 months, May’s reading has also disappointed the market (consensus: -5.9%).

Moreover, US inventory has resumed increase over the past 2 weeks. After the market close, the industry-sponsored API estimated that crude oil stockpile rose +3.86 mmb in the week ended June 12. US production has been falling. Yet, imports have shown signs of building up since May, while exports continued to shrink.Gasoline and distillate inventories also gained +4.27 mmb and +0.92 mmb, respectively.

OPEC to meet on compliance matters

Earlier this month, OPEC+ announced to extend the output cut deal by a month to end-July. Recall that, in light of the pandemic-led demand contraction, OPEC+ in April agreed to reduce oil production by an aggregate 10M bpd in May and June. The cut will fall to 8M bpd from July until end-2020, followed by a decline to 6M bpd from January 2020 to April 2022. Participants’ output quotas are reverenced to production in October 2018, while Saudi Arabia and Russia use 11M bpd as the reference. Iran, Libya and Venezuela are again exempted. Another exception is Mexico which only accepted to lower output by 100K bpd. The remaining 300K bpd cut is shouldered by the US.

Compliance has been an ongoing concern as oil income is the major revenue to oil producing nations. According to a survey by S&P Global/Platt, OPEC’s 13’s output fell to 24.3M bpd, achieving a compliance rate of 82% in May. Saudi Arabia’s production was largely in line with its quota. Yet, Iraq and Nirgeria, oil facilities of both have been destructed due to geopolitical issues and civil war for years, have been notorious of excessive production. Iraq, pumped 4.19M bpd last month, exceeded nearly 600K bpd above its cap. Nigeria produced 300K bpd more than its assigned output. Non-OPEC participants reduced output to 13.9M bpd, achieving 91% compliance for the month. Note, however, the largest non-OPEC producer of the deal, Russia, pumped 8.6M bpd, about 110K bpd more than its quota. The whole OPEC+ group’s collective compliance was 85%. 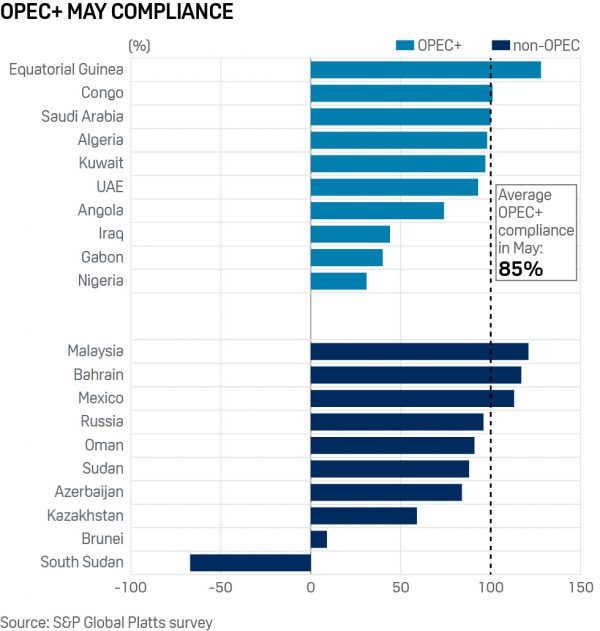 US Crude Oil and Petroleum Product Inventories Fell Across the Board

RBA To Cut Rates On October 6