After delaying the meeting to discuss output quota for a day, the OPEC+ still fails to reach a deal regarding production increase for the coming months. News headlines suggest that the increase could eventually be below market expectations. Crude oil prices jumped with the front-month WTI contract rose to near 3-year high of US$76.22/ bbl before pullback. Price settled at 75.04, up +2.1% for the day. The Brent contract also soared to 74.55, the highest since 2018 before settling at 75.61, up +0.64%. 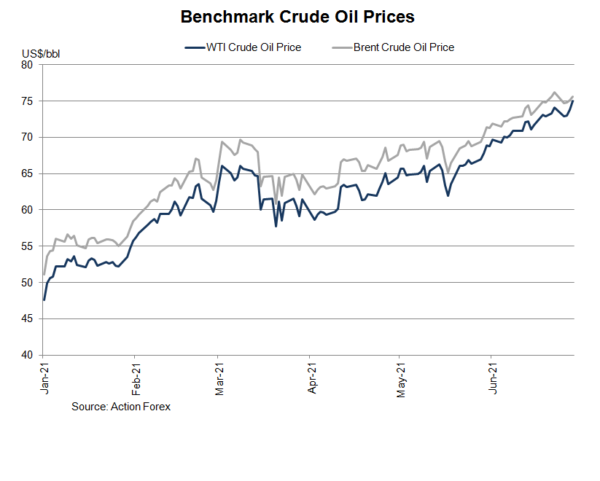 Amidst the outbreak of the coronavirus pandemic last year, the OPEC+ reached a deal to cut output in order to rescue oil prices. As the economic situation stabilizes, the alliance has gradually been bringing production back since a few month ago. At the current meeting, the alliance has agreed preliminarily to add production by +2M bpd from August to December. This translates into the monthly increase of +0.4M bpd, less than market expectations of +0.5M bpd in August. Meanwhile, the deal to limit output would be extended from April 2022 to end-2022. Yet, no final agreement has been reached and the meeting will continue today. The sticky point is the UAE which hopes to raise production. Its proposal to raise the baseline of quota calculation from the current 3.2M bpd to 3.8M bpd has been rejected by other members.

Lower reduction in output cut would tighten the market, a scenario supportive of crude oil prices. Meanwhile, extension of the deal until the end of next year is another price driver, in particular amidst Iran uncertainty and global economic developments.

Talks will continue today, in hopes of reaching a final deal. Failure to reach an agreement would mean that the alliance would stick with current production – no further trim of output cut. This should send crude oil prices higher.