Brexit uncertainty continues to be the key determinant of sterling’s movement in the coming quarters. Market consensus signals that GBPUSD would rally as much as 4% in 6 months and about 6% in 2019. The forecasts are based on the assumption of a smooth Brexit. We are, however, skeptical over such optimism. We expect that the UK Parliament would eventually ratify the Withdrawal Agreement, avoiding a no-deal Brexit. Yet, this is just the beginning of the Brexit process. As the UK officially leaves EU on the deadline of March 29 and enters the 21-month transition period, negotiations of future trade relations with the EU would be again create uncertainty in the well being of UK’s economy and BOE monetary policy. Volatility in GBP should persist in 2019.

The UK Parliament is expected to vote on the Withdrawal Agreement on January 15, after PM Theresa May called off a vote last month amidst doomed defeat. While refusing a second referendum and extending the Brexit process, May vowed that she would seek further “assurances” from the EU on issues such “measures specific to Northern Ireland” and “a greater role for parliament as we take these negotiations forward into the next stage for our future relationship”. We expect some tactical changes in the agreement might lead to eventual approval by the MPs. Despite the threats from hardliner Brexiteers, they are probably unwilling to bear the sin of contributing to no-deal Brexit.

Yet, approval of the Withdrawal Agreement does not mean the dust is settled. Indeed, this marks the beginning of a more critical stage. As UK enters the 21-month transition period, negotiations on future trade relations with the EU starts. The negotiations involve discussion on UK-EU trade relations from 2021 onwards. For the UK, tt is a matter of trade-off between sovereignty and free- trade privileges. Although PM May had attempted to entangle trade issues with the divorce bills and Irish border, the EU stood firm and insisted on separating trade issues from the withdrawal deal. We expect EU would remain assertive in trade negotiations. This would not bode well for the UK. After all, leaving the single market, which has taken up 40% of UK exports and contributed about 45% of UK’s imports, is prone to have tremendous impacts on UK’s economy.

The latest Markit report shows that the country’s manufacturing PMI rose to a 6-month high of 54.2 in December. Note, however, that the strong reading was driven by rises in new business and stocks of purchases. Rather than showing confidence in the Brexit outlook, these signaled producers and customers, both at home and overseas, are preparing for the hard time in case of Brexit disruption. Services PMI climbed +0.8 point higher to 51.2 in December. This was compared with a 28-month low made a month ago. indeed, the final two months of 2018 saw the weakest back-to-back expansions of business activity since late-2012. As noted in the accompanying statement, the companies surveyed indicated their anxiety over Brexit and need for “clarity on Brexit” so as to “prevent the economy sliding into contraction”.

UK’s economy has been struggling over the past year. Although growth has been picked up from the exceptionally weak first quarter, the recovery is mild. Monthly data suggest that has been flat in August and September, before showing a +0.1% expansion in October. From 3-month basis, GDP grew +0.4% in the three months to October, easing from +0.6% in the three months to September. According to the government, “GDP growth slowed going into the autumn after a strong summer, with a softening in services sector growth mainly due to a fall in car sales”. “This was offset by a strong showing from IT and accountancy”. For the first 10 months of the year, GDP has gained +1% from the end of the prior year.

Inflation has remained above BOE’s +2% target. However, it has been falling from the +3.1% peak in November 2017. The central bank should feel less urgent to raise interest rate to curb inflation. 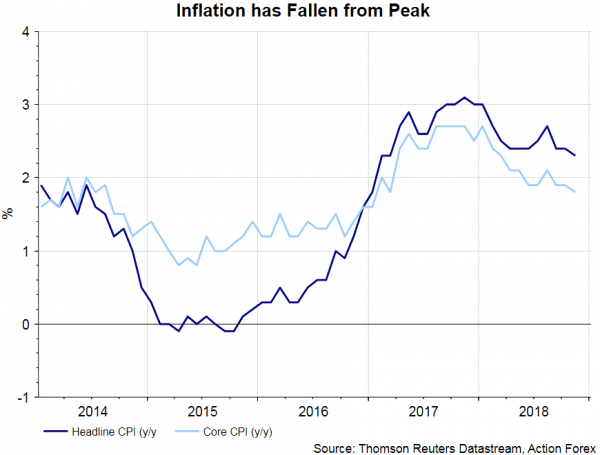 The central bank’s monetary policy is also highlt dependent on Brexit. As such, forecast BOE’s rate hikes is as challenging as forecasting the outlook of sterling. Prolonged Brexit uncertainty might delay rate hike. BOE increased the policy rate twice (November 2017 and August 2018) after the 2007/08 global financial crisis. Both hikes were triggered by soaring inflation and adopted reluctantly by the central bank. If inflation steadies or continues its downtrend this year, BOE would prefer to take a wait-and- see mode, trying to leaving the policy rate as low levels so that it would not interrupt the economic recovery. The consensus (Reuters poll) forecasts that there would one rate hike by BOE this year, taking the bank rate from the current 0.75% to 1%. 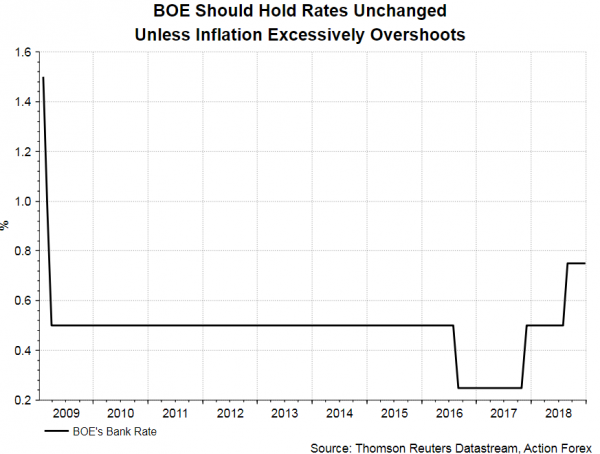 GBP/USD Outlook: Pound Is Holding In Red After Another Failure At 1.2500