Despite the recovery over the past few days, Japanese yen has still lost -1.6% against US dollar in the first 3 weeks of February. This phenomenon is puzzling as JPY, as traditional safe-haven currency, usually strengthens as global uncertainty and risk aversion intensify. There are a number of reasons for the loss of JPY’s safe-haven status of late.

Concerns over Economic Recession: Japan’s economy surprisingly contracted -1.6% q/q in 4Q19. Consumption fell -1.6% q/q while business investment slumped -2.2% q/q. At annualized rate, GDP slumped -6.3% at the quarter, the weakest in 6 years. The government increased VAT to 10% in October last year, from 8% previously. Although the government launched a subsidy program with the aim of supporting household spending, the tax hike appeared to have shrunk consumption. It is suspected that the tax hike might bring Japan to recession, just like what had happened in 2014. Japan raised VAT tax in April 2014, hoping to boost inflation, stimulate wage and economic growth. However, the boost of inflation was short-lived and the economy slumped an annualized -7.4% q/q in 2Q14.

The flash composite output PMI plunged to 47 in February, from 50.1 (final) in January. Both services and manufacturing indices fell to the contractionary territory. As noted in the report, consumption in 4Q19 were negatively affected by sale tax hike and “devastating typhoon” in October. The demand has not yet recovered in early 2020. The report also suggested that “the coronavirus outbreak has hit tourism particularly hard in Japan, a key source of demand for services”. Note that the report only covered first half of February, while the epidemic has continued to worsen in Japan and the world since then.

Coronavirus outbreak: Disastrous outbreak in China is expected to affect tourism in Japan and cause disruption in supply chain. For the former, Japan received about 9.6M Chinese tourists in 2019, accounting for over 30% of international tourist spending. Tourism takes up about 2% of Japan’s economy GDP. The greater impact, however, comes from the latter. A number of auto plants have continued to shut down in China, including Japanese manufacturers. Although the government and the auto industry have established a new task force, the New Coronavirus Countermeasures Automobile Council, last week, to minimize the impact of the coronavirus on the automotive sector, it is hard to rescue to short-term shock.

Excluding those originated from the Diamond Princess Cruise ship docked off Yokohama, the number of infected cases in Japan has increased to 164 as of February 26. This would inevitably exacerbate consumer and business confidence, which has been fragile for some time. Worse still, it is increasingly possible that upcoming Tokyo Olympic Games will be cancelled.

Expectations of further easing by BOJ: Although BOJ’s policy rate has been staying in negative territory for years, it has done little to help boost economic growth and inflation. Besides, leaving the policy rate at -0.1%, the BOJ also guides short-term rates at -0.1% and the 10-year government bond yield around 0% (yield curve control). Speculations have risen of late that further easing is needed. Goushi Kataoka, one of the most dovish members of the central bank, has recently urged for further rate cut. He warned that consumption might weaken further amidst the epidemic. He added that “worsening sentiment among automakers and retailers could also affect the outlook for capital expenditure”. He has also called for strategic review of the monetary policy after years of struggle to combat deflation and weak growth. While his idea was rejected by Governor Kuroda, the central bank would be unable to stand aside if economic developments deteriorate rapid. Further actions to be taken might include step-up of JGBs purchases, further rate cut and FX market intervention. 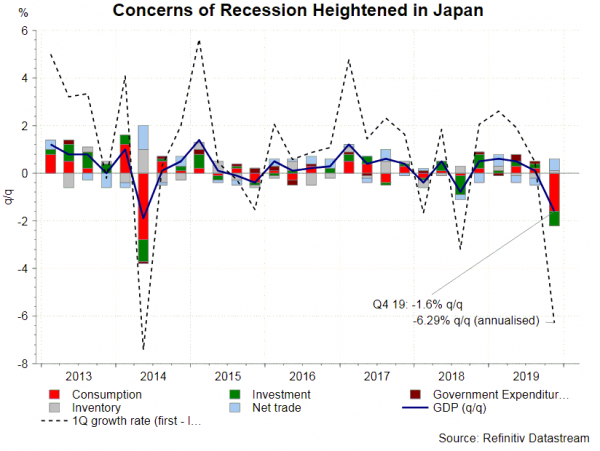 The Problem With Trading Virus Stats