The Monetary Authority of Singapore* (MAS) last Friday announced to increase the slope of the Singaporean dollar nominal effective exchange rate (SGD NEER) policy band “slightly”, the first adjustment since the policy tool was reduced to 0% in April 2016. As usual, the central bank did not disclose how much the adjustment is, although a +0.5% slope increase per annum is the widely-expected figure. The central bank, however, left the “width of the policy band and the level at which it is centered”. The tilt to a more hawkish monetary stance was driven by improvement in the inflation outlook, although US-China trade tensions have imposed uncertainty to the economic outlook. After all, the MAS remained upbeat, expecting the real GDP to expand slightly above the mid-point of the 1.5-3.5% forecast range. 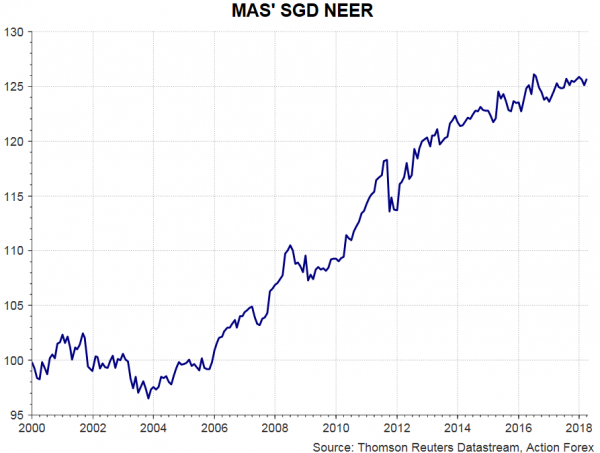 The accompanying statement showed that MAS turned more hawkish at the April meeting. It noted that “upward pressures on MAS core inflation are expected to persist over the course of this year and beyond, underpinned by an improving labor market”. Indeed, the central bank upgraded its assessment on core inflation, estimating that it should “come in within the upper half of the 1-2% forecast range”, compared with the expectations it would “stay in the range of 1-2% in 2018″ suggested in the Regional Economic Development Report released last month.

On employment, the central bank judged that “further improvements in resident employment should support a faster pace of wage growth in 2018 compared to 2017”. Expectations of acceleration in wage growth underpinned MAS’ improved inflation outlook.

Policymakers forecast GDP growth to come in “slightly above the middle of the forecast range of 1.5–3.5%” this year. However, they cautioned that “rising trade tensions between the major economies pose a downside risk to the growth outlook”. Separately, the preliminary reading for the country’s real GDP grew +4.3% y/y in 1Q18, up from +3.6% in the prior quarter.

The announcement to increase the slope of its SGD NEER policy band “slightly” marks the first tightening of MAS’ exchange rate-based monetary policy in 6 years. The move might have the impacts of lifting Singapore’s interbank lending rates as well as Treasury yields. Last week, Goldman Sachs reinstated its trade recommendation of paying HKD rates and receiving SGD rates due to weakness in HK dollar. The widening of spread between HIBOR and SIBOR, as a result of MAS’ move, probably reinforced this conviction.

*The MAS adopts an “exchange rate-centered” monetary policy, rather than money supply or interest rates, as the principal tool of monetary policy. The central bank adjusts its monetary policy via adjusting the slope of policy band and the width of policy band, as well as re-centering the level of the policy band. The exchange rate (Singaporean dollar) is managed against a trade-weighted basket of currencies of the country’s major trading partners and competitors. The trade-weighted Singaporean dollar is allowed to float within an undisclosed policy band, which is adjustable and allowed to “crawl”. The authority has never disclosed the components in the currency basket nor the weights of each component.