Monday June 18: Five things the markets are talking about

Global trade is again top of capital markets agenda, as dealers and investors are now officially worried about the intensifying confrontation between the U.S and China.

Global equities are trading under pressure over the escalating protectionist standoff between the two largest economies, along with crude oil prices ahead of this week significant OPEC meeting (June 22). The U.S dollar remains supported while U.S Treasuries are steady.

President Trump approved tariffs of +25% on about +$50B of Chinese goods on Friday, prompting Chinese officials to hit back by announcing the country would levy penalties of the same rate on U.S goods of the same value. Coupled with the concerns about the fate of the Nafta and tariffs imposed on European allies are also adding to investor anxiety.

Again this week, the market is also looking to central bankers for further guidance on monetary policy after the Fed and the ECB both held meetings last week. The Bank of England (BoE) and Swiss National Bank (SNB) are meeting on Thursday (June 21). No rate hikes are expected.

In currencies, the EUR (€1.1587) remains under pressure as a migration policy crisis threatens German Chancellor Merkel’s coalition, while the pound (£1.3235) has ticked lower ahead of a parliament debate on the Brexit withdrawal bill.

In Japan, market worries over how the trade spat between the U.S and China will play out supported the yen (¥110.53) and helped pressure domestic stocks. The Nikkei fell -0.75%, helped by the energy/coal segment sinking another -3.7%, while the broader Topix index fell the most in almost three-weeks after a strong earthquake hit Osaka, one of Japan’s industrial heartlands.

Down-under, Aussie shares finished slightly higher overnight as gains in financials and real estate stocks outweighed a fall in materials stocks on lower commodities prices. The S&P/ASX 200 index close up at +0.2%. The benchmark rose +1.3% on Friday. In S. Korea, the Kospi fell amid fears of an escalating Sino-U.S trade spat, the index was down -1.15%.

Note: Markets were closed for the holidays in China and Hong Kong. 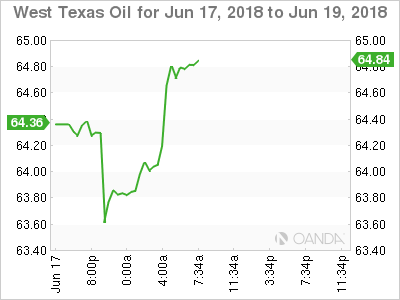 Oil has extended its decline as Saudi Arabia and Russia prepare for a clash with other OPEC members and allies over whether to raise production. Not helping the cause is China threating to impose duties on U.S crude imports in their trade dispute.

Note: U.S oil exports have rocketed in the past 24-months as shale oil production has surged, with China becoming one of the biggest customers of American crude.

OPEC meets June 22 and 23 in Vienna where they will debate output policy. Saudi Arabia and Russia are saying that production should be increased “gradually” if deemed necessary.

Ahead of the U.S open, gold prices have inched higher overnight after falling to a six-month low on Friday, as a Sino-U.S trade dispute triggered safe-haven buying, but a strong U.S dollar has put a cap on the upside for the time being. Spot gold has edged up +0.1% to +$1,279.70 per ounce. U.S gold futures for August delivery are up +0.3% at +$1,282.10 per ounce. 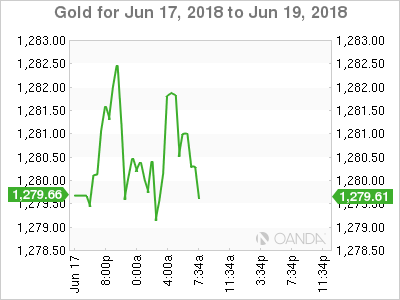 Eurozone government bond yields are little changed overnight, with yields atop of their low levels after the ECB’s commitment last week to keep interest rates at present levels through summer 2019.

Note: A three-day ECB forum kicks off in Portugal today and gives the ECB the opportunity to give markets further guidance on their plans to wind down QE later this year. ECB chief Mario Draghi speaks later in the day.

The 10-year German Bund yield is trading +0.05 bps higher at +0.40%. However, the dealers are expecting Bund yields to come under further pressure this week, as eurozone bond supply will be significant this week.

Note: Both Slovakia and Belgium to auction bonds later today.

Elsewhere, the yield on 10-year Treasuries decreased -1 bps to +2.92%, the lowest in more than two-weeks. In the U.K, the 10-year Gilt yield dipped -1 bps to +1.328%, reaching the lowest in almost two weeks on its fifth straight decline. 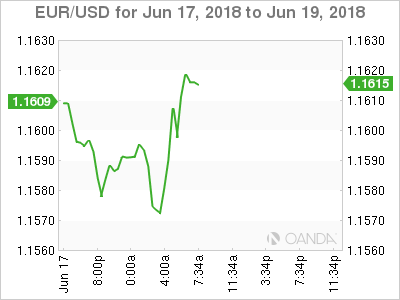 The ‘mighty’ dollar remains better bid on safe-haven demand as the market become more risk averse due to escalating global trade war fears after the U.S imposed tariffs on China. China has retaliated, pushing U.S President Trump to up ‘his’ ante with perhaps even more tariffs.

Which two of these economies has a greater staying power in a drawn out trade war?

EUR/USD (€1.1596) trades just below the psychological €1.1600 handle as the dollar approaches a seven-month high as continued trade tensions weigh. For the ‘bears,’ the appetite for “carry” trades is likely to go up after the ECB said last week it would not raise interest rates at least until after the summer of 2019.

GBP/USD (£1.3255) is also weaker on dollar strength ahead of this weeks BoE’s rate decision. Dealers expect the pound’s price action to be rather muted until Thursday. 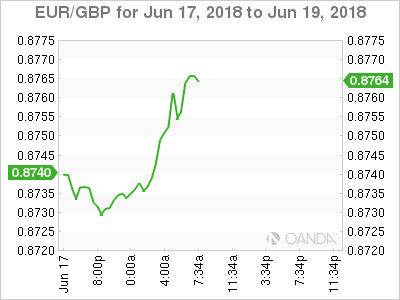 Data this morning showed that Italy’s trade surplus totalled +€2.938B in April.

In the first four months of the year, the trade deficit totalled -€10.470B. However, ex-energy products, the trade surplus reached +€22.975B. 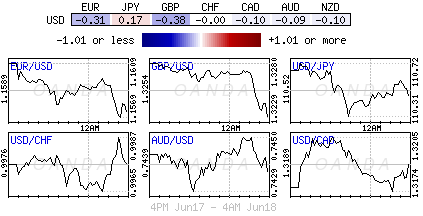