Higher political risk in 2017 was forecasted and so far it hasn’t disappointed. The calendar of democratic events expanded last week as the United Kingdom announced a snap election that will be held in June. The pound has appreciated above 2 percent since the announcement in the hope it will strengthen the Conservative party’s position in parliament and give more latitude for negotiating the British exit from the European Union. The first leg of the French presidential elections will kick off with the second round to take place on May 7.

The Japanese yen is a preferred destination during risk aversion periods which boosted the currency two weeks ago. As risk appetite returned the yen gave back gains and US dollar could continue to advance ahead of the Bank of Japan (BOJ) Outlook Report and monetary policy decisions on early Thursday, April 27. The BOJ will host a press conference at 2:30 am EDT (6:30 am GMT). BOJ Governor Haruhiko Kuroda spoke on Thursday signalling it will continue to keep its monetary policy accommodative with the current pace of asset purchases to remain for some time. Despite growth in the economy the appreciation of the currency could delay inflation reaching the 2 percent goal set by the central bank who could publish a lower target on Thursday.

European Central Bank (ECB) will announce its monetary policy later on the same day. ECB President Mario Draghi is expected to hold the benchmark rate and stimulus programs without any changes. Draghi said on Friday that very substantial accommodation is still necessary in the Euro zone despite the risk of deflation not a going concern. Growth will be on display on Friday, April 28 at 8:30 am EDT when the US releases the first estimate of GDP for the first quarter of 2017, the forecast shows a gain of 1.3 percent that is below the last quarter gain of 2.1 percent. The slowdown of the economy will surely raise questions on what the rate hike path of the Fed when the economy is not gaining momentum and pro-growth policies by the Trump administration are yet to appear. 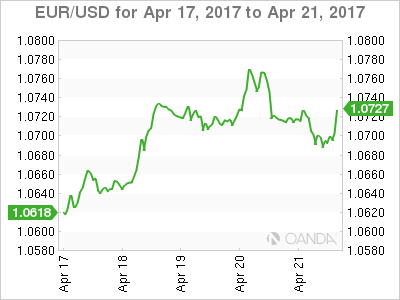 The EUR/USD gained 0.609 percent in the last five trading days. The single pair is trading at 1.0689 after touching weekly highs of 1.0777 but the US dollar has bounced as French election jitters took its toll on the euro. US President Trump said he would unveil a tax plan next week which got some wind under the greenback sails after his dollar strength comments had sunk the currency. 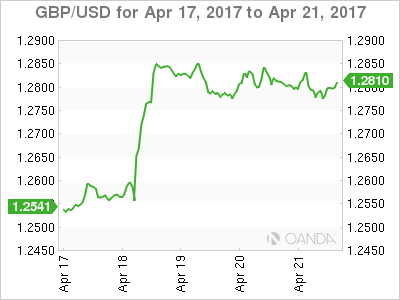 The GBP/USD gained 2.11 percent in the last week. The pair is trading at 1.2796 in a week where British Prime Minister Theresa May announced the decision to call for a snap election in June. The move was ratified by parliament the next day. The market is taking this as a political move to consolidate power in parliament ahead of Brexit negotiations with the European Union. 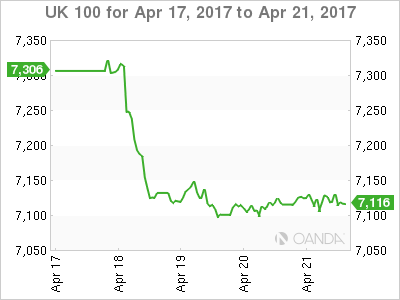 The UK stock market lost 2.56 percent in the last five trading days. The UK100 is trading at 7,119 after UK PM May’s shocking decision to call for an early election in June. The rise of the pound as a result of a softer Brexit deal took its toll on the stock market as results were below expectations and the weak UK retail sales data released on Friday. The UK stock market had its worst performance since November. 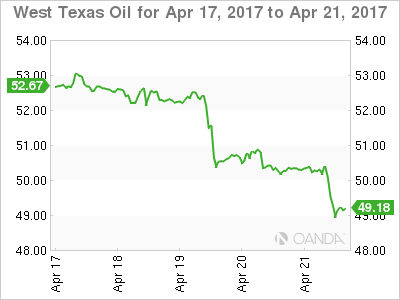 The price of West Texas dropped 7.18 percent in the last week. The energy benchmark is trading at $48.97 as downward pressure from US production has driven the price below $50. The Organization of the Petroleum Exporting Countries (OPEC) production cut deal was able to stabilize prices last year before kicking into effect in 2017, but as it nears the end of its six month term there are doubts on how effective it has really been as there is still ample supply. US oil rig counts rose again for the 14th straight week to a total of 688.

The group will meet in Vienna this weekend with an extension to the production cut deal in the works. Russia has already said that it will meet with OPEC members on late May. Global inflation expectations were based on a higher oil price and if those fail to materialize the reflation trade will have very little to stand on.