Turkish Lira Loses Another 3% Against The Dollar

Thursday August 9: Five things the markets are talking about

The geopolitical tension theme continues to dominate capital markets, now that China has responded to the U.S’s tariff onslaught with additional tariffs of its own.

In currencies, the market is again focused on sterling (£1.2852) as it encroaches on its new 12-month low as politics continues to provide the overriding direction for the currency.

And then there is the Turkish lira ($5.4210) as it makes it way towards record lows on market worries about President Erodgan’s grip on monetary policy and on a deepening dispute with the Trump administration.

Down-under, the kiwi (NZ$0.6645) has plummeted to a two-year low after the Reserve Bank of New Zealand (RBNZ) pushed out its forecast for a rate increase.

In Japan, the Nikkei edged lower overnight as a stronger yen (¥111.00) impeded investor risk appetite. Not helping was the auto sector, which saw a sell-off on news that certain automakers improperly conducted vehicle inspections in the domestic market. The Nikkei share average dropped -0.2%, while the broader Topix lost -0.3%.

In Europe, regional bourses are trading mostly lower in quite trading. U.S stocks are set to open little changed. 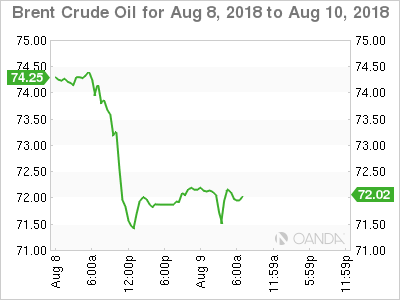 2. Oil finds some support after a -3% drop Wednesday, gold steady

Oil prices are a tad higher after yesterdays steep slide, when the first round of U.S sanctions against Iran came into effect. Not providing much support is investor worries that crude demand will and has been hit by the escalating Sino-U.S trade dispute.

With U.S sanctions against Iran, which shipped out +3M bpd of crude in July, officially came into effect on Tuesday and the market is anticipating that supply losses could range from +600K to +1.5M bpd.

Stateside yesterday, the weekly EIA report showed that crude inventories fell -1.4M barrels last week, less than half the -3.3M barrel draw the market had expected and that gas stocks rose by +2.9M barrels, compared with expectations for a drop of -1.7M barrel drop.

Ahead of the U.S open, gold prices are mostly steady in a range-bound overnight session, as a stronger dollar continues to weigh on upside momentum. Spot gold is up +0.1% at +$1,214.23 an ounce, having gained +0.2% Wednesday. 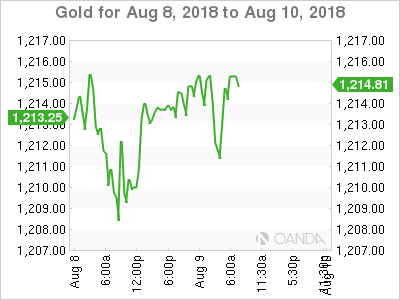 Reserve Bank of New Zealand (RBNZ) Governor Orr left interest unchanged at +1.75% as expected, while moving the timing of any future increase to Q4 in 2020 from Q1 in the same year.

Assistant Governor McDermott indicated that the chance of a rate cut had increased and wanted the market to understand that they needed to see core-inflation above +2% for any rate hike. The direction of the next move could be “up or down,” he says. The cautious comments saw the NZD ($0.6650) weaken by -0.45% outright. 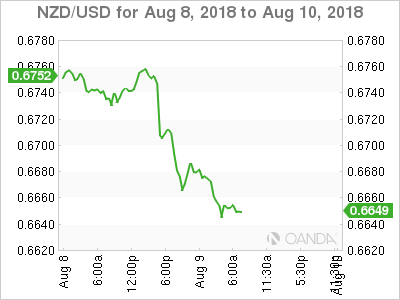 The Turkish lira has hit a new record low this morning as it weakens as much as -3% outright on souring relations with the U.S over the detention of an American pastor. USD/TRY is last up +2.3% at $5.3994, after it hit a record high of $5.4488 earlier.

USD/JPY (¥111.14) is a tad higher, but stable ahead of the U.S-Japan trade talks that begin in Washington later today.

RUB ($65.88) is weaker by -1%, testing its two-year low outright following the U.S State Department announcement on Russian sanctions related to a chemical agent being used in a U.K spy attack last March. 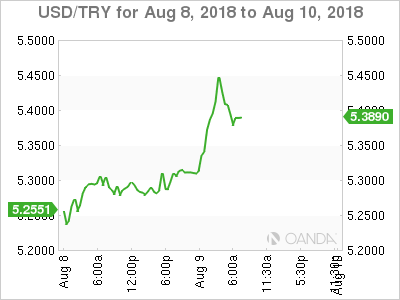 According to the ECB in its regular economic bulletin released earlier this morning, the risks to global growth are growing.

“Downside risks to the global economy have intensified amid actions and threats regarding trade tariff increases by the United States and possible retaliation by the affected countries,” the ECB said in an assessment.

The ECB added that if all the threatened measures were to be implemented, the average U.S tariff rate would rise to levels not seen in the last 50-years.

Note: A fortnight ago, the ECB kept policy unchanged, staying on course to end its QE program by the close of the year and to raise rates for the first time since the euro zone debt crisis in the autumn of 2019. 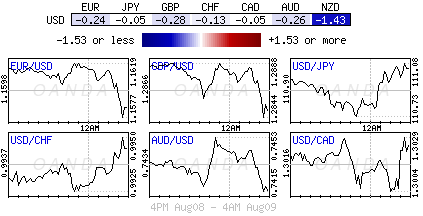