Monetary policy will be back in focus next week as the European Central Bank and the Bank of England hold policy meetings. However, with both central banks expected to stick to their existing outlook, investors will likely turn to data for fresh direction. The highlights will include employment reports out of Australia and the United Kingdom, US inflation and retail sales figures, and key Chinese economic indicators. GDP numbers from the UK and Japan should also attract attention.

Upbeat numbers on second quarter economic performance failed to do the Australian dollar any favours during the past week as RBA rate hikes look no nearer after the data. Ongoing trade uncertainty has also been weighing on the aussie and there could be more downside pressure for the currency should data from China point to a hit to the economy from the US tariffs. First out of China are the producer and consumer price indices on Monday. The producer price index (PPI) is seen as a good barometer for demand for raw materials and so an expected drop in the annual PPI rate from 4.6% to 4% in August would not bode well for market sentiment. On Friday, figures on industrial output, investment in urban areas and retail sales are published. Retail sales are forecast to moderate slightly in August, but industrial output and investment are expected to grow at the same pace as in July.

Moving to domestic data for the aussie, the NAB business conditions survey for August on Tuesday and the Westpac consumer sentiment gauge for September on Wednesday could provide some support if the numbers signal a steady third quarter outlook. But of more importance will be Thursday’s employment report. The Australian economy is forecast to have added 15k jobs in August after unexpectedly shedding 3.9k jobs in July. The jobless rate is projected to hold steady at 5.3%. A solid set of jobs figures could help put a floor to the aussie’s downslide. 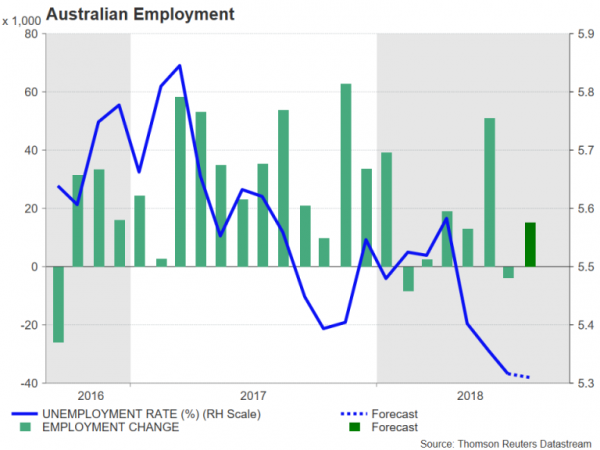 Japanese growth could be revised up

Second quarter growth in Japan will likely be revised up to an annualized rate of 2.6% on Monday as quarterly capital expenditure data released this week showed business spending surged by an impressive 12.8% year-on-year during the period. The preliminary GDP estimate of 1.9% annualized growth was already above forecasts and an even stronger reading could boost the yen amid sluggish growth elsewhere (bar the United States). Later in the week, the focus will turn to the current quarter as corporate goods prices for August are due on Thursday, along with machinery orders for July. Also to watch is the revised industrial production number for July on Friday.

No surprises expected from ECB

The European Central Bank meeting on Thursday will undoubtedly be the highlight of the week for many euro traders even if nothing new is being anticipated from President Mario Draghi when he speaks at the subsequent press conference. The bank has already set its path for monetary policy for at least until summer 2019 and it would take a significant deterioration or improvement in economic conditions for policymakers to alter course. However, the meeting will still be watched closely as new quarterly staff projections will be published that could reveal some changes to the bank’s growth and inflation forecasts for the Eurozone for the next 2-3 years.

The euro could see some knee-jerk reactions to remarks by Draghi or to revised economic projections, but its medium-term picture will depend on incoming data. So far, there’s little evidence that growth in the region is picking up speed and Monday’s Eurozone sentix index and Tuesday’s ZEW economic sentiment survey for Germany aren’t expected to change that view. The ZEW economic sentiment index is forecast to increase slightly from -13.7 to -13.0 in September. On Wednesday, euro area industrial production figures for July are due, while on Friday, quarterly labour cost data will show whether there’s been any acceleration in Eurozone wage growth in the second quarter. 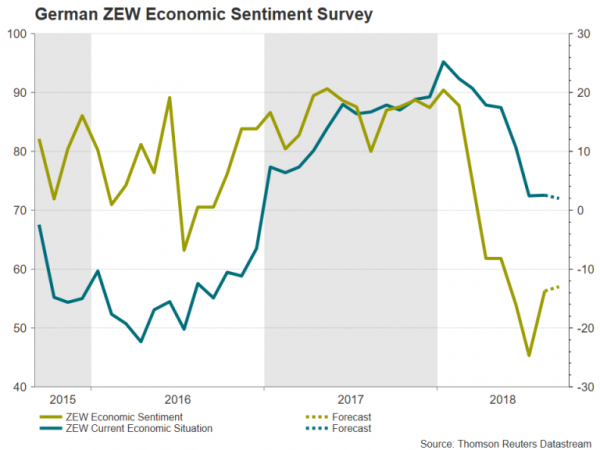 Bank of England meeting could be non-event

The pound posted a modest recovery in the past week on reports that the UK and the EU are close to resolving the remaining sticking points in the withdrawal agreement. Brexit-related headlines are set to intensify in the coming weeks as we approach the informal summit of EU leaders on September 20 ahead of the crucial European Council meeting on October 18-19, which is seen as the deadline for finalizing the divorce terms. But economic data will also be making the headlines in the coming week as a number of key releases are due out of the UK.

Starting with Monday, monthly output figures on industry, manufacturing and services will be released together with the latest GDP estimates and trade figures. Manufacturing output rebounded towards the end of the second quarter after contracting sharply between February and April. The sector is expected to have recovered further in July, with production rising by 0.2% month-on-month, while overall industrial output is thought to have expanded by 0.2% as well. Investors will also be able to look at the monthly GDP estimates for July for a wider gauge of the economy. The UK economy is forecast to have grown by 0.2% m/m in July, which would produce an annual figure of 1.4%. If confirmed, it would indicate a sound start to the third quarter. 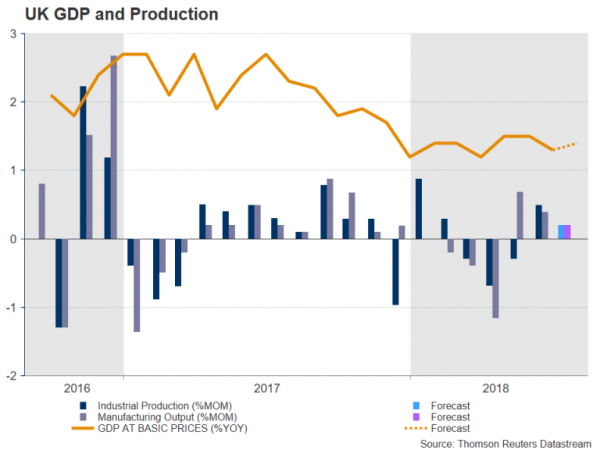 The barrage of data will continue on Tuesday with July jobs numbers. In the three months to June, jobs growth fell to its slowest since October 2017, though the unemployment rate edged down to 4.0% – a more than 43-year low. The jobless rate is expected to stay at 4.0% in the three months to July. Wage growth remains subdued, however, with average weekly earnings rising by 2.4% y/y in June, down from 2.8% at the beginning of the year. A further deceleration in wage growth in July could weigh on sterling as it would cast doubt on the need to raise interest rates.

For now, though, the Bank of England will likely keep to its existing guidance of further gradual and limited rate hikes in the coming years when it announces its latest policy decision on Thursday. The BoE last raised interest rates in August, lifting them above 0.50% for the first time since 2009. It is widely anticipated to hold rates unchanged at 0.75% next week. With no press conference and quarterly inflation report at the September meeting, the pound may struggle to get much reaction from the BoE’s decision.

US inflation and retail sales to be eyed

It will be a fairly packed week for US data with inflation, retail sales and industrial output numbers coming under the spotlight. However, none may be able to provide the US dollar with clear direction as trade-related safe-haven flows look set to remain the main driver of the greenback. The week will get off to a slow start with the JOLTS job openings on Tuesday being the only major release. Producer prices for August will follow on Wednesday. But things will only heat up on Thursday with the CPI report. Annual inflation as measured by the consumer price index is expected to ease marginally from 2.9% to 2.8% in August. The core rate is forecast to stay unchanged at 2.4%. While the Fed doesn’t pay too much attention to CPI inflation, it’s still considered a good indicator of inflationary pressures in the US economy. 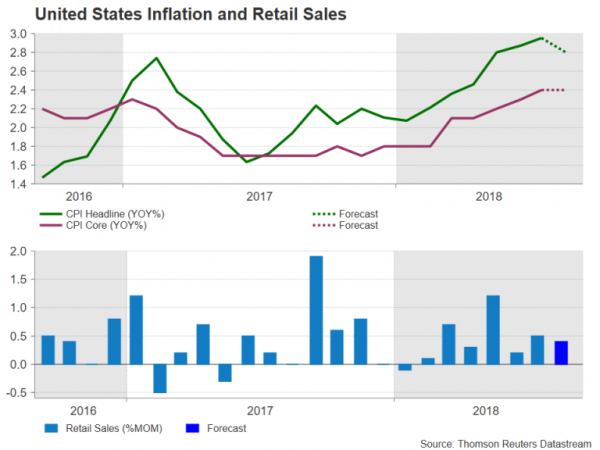 The biggest movers for the dollar though will probably come from Friday’s retail sales, industrial output and consumer confidence data. Retail sales are estimated to continue growing at a healthy pace in August, by 0.4% m/m, moderating slightly from the prior 0.5%. Industrial production is forecast to post a third straight month of gains in August, rising by 0.3% m/m. Finally, the University of Michigan’s preliminary reading of the consumer sentiment index is expected to see an improvement to 96.5 for September.